Meditation and Poetics – (Haiku and Trikaya – 2)

It struck me that the one perfect haiku  that I wrote in Court the other day (sic), in Golden Courthouse, [Golden, Colorado] did actually examine, ((in) hindsight, written before (Chogyam) Trungpa (Rinpoche)’s discourse), did actually fit into that (three-part [trikaya] conception). The first line was – “In Golden Court, waiting for the judge, breathing silent”. So there’s an open space where there are bodies and breath. Then an identification of the personages there, recognition – “Prisoners, witnesses, police”. And then the comment (not in the form of a moral, but in the form of another issue, another image, which describes the feeling-tone of the situation, which is actually anxiety accompanied with boredom, in a Court, when you’re waiting – If you’ve ever been in a Court, on the dock, you know that nervousness and anxiety). So the comment was – “The stenographer yawns into her palms”. (incidentally, put in the form of a physical image, rather than an anxiety boredom) – “The stenographer yawns into her palms”. So you have the scene – the open scene – “Golden Court, waiting for the judge breathing silent/Prisoners, witnesses, police/The stenographer yawns into her palms”.

Remember the one about trying to pick up a stone? – “Not a single stone/to throw at the dog/The wintry moon”. You get something of that in that – in the first two lines, you have the field, the frozen field, and the frozenness – “Not a single stone” – what for? – in a sense of recognition – “to throw at the dog”. And then the comment on it – “The wintry moon” – Either blank wintry moon, nowhere to go, just cold white moon above. Also, a distraction from that, a breaking of the anger or a gap and then the anger disappears – “The wintry moon” – So the disappearance of the anger is a comment on the anger, as well as the frozenness of the situation. It’s very subtle and works on a lot of different (levels), refracted from a lot of different angels, obviously, but, as a basic structure, Trungpa’s statements struck me as being pretty smart actually – sharp, I thought. I learned something from it.  Yeah?

Student: (I read it as having a) fourth line – “the wintry moon”

Student: (I read it that the) third line is being suppressed (and that it’s a) curse or something and “wintry moon” is the fourth line.

AG: Well, the curse itself could be – “Not a single stone to throw at the dog!/The wintry moon” – It’s the frustration of that, also . Or the bitter freeze of it. I don’t know. It would be interesting to do an actual examination of really good haiku to see how they were ordered in the mind, what was the order of the lines, whether it did follow any kind of pattern like that.

Trungpa was asserting this, incidentally, as the actual pattern of the phenomena of perception or thinking – thinking-perception. And I thought that was really interesting  because I’d never heard it laid out so simply in its application to poetics. He did give a lecture earlier this year in which he was talking about calligraphy and flower-arrangement in a similar triad (as Heaven-Earth-Man)  – Open space of Heaven, grounding in form on Earth, and then the comment on it – Man, or the interpreter. Heaven empty open sunyata – Emptiness. Earth, a form – the place here that we know, this recognizable place. And then Man as the uniter of both – the intellectual uniter, the one in whose awareness both are included – Heaven and Earth. You couldn’t have Heaven and Earth without Man to see them. 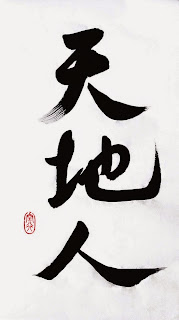 Anyway it struck me as a real sharp thing and I was astounded when he said (that) in Tibetan poetry every line of poetry followed that schemata. It would mean a lot of poets totally sunk into their minds, if this was true mind operation.

But I was always interested in poetry as exemplary of the operation of the mind, or as a manifestation of operation of mind-consciousness, and that’s what this course has been about. So I called it “Meditation and Poetics” and that’s what I’ve been trying to get to, though my understanding of how mind operates is relatively limited, as well, I guess, as anybody. Everybody has theories, but I’m thinking, by practical observation, what do you come to? – through practical observation (which is like our sitting here (each day in class for) ten minutes). After long familiarity of mind, do you come to any such conclusion or do you come to some different conclusion?  Yeah?

Student: I was interested in that (close attention in the) practice of (writing haiku) and that if you are (mindful of the) energies of (practical observation), and they’re working with you, that’s not much different than working with energies (that arise in) meditation. That seemed to be what he was saying..(and) that shifted the perspective I was having on the course completely..

AG: Uh-huh. It shifted my perspective. That’s why I called him in – Call in the experts.We’re talking about meditation – He’s an expert in meditation. It actually shifted my awareness. That’s the big apercu, that’s the big perception I’ve had this summer, or the big clarification I’ve had all summer, was that one comment he made about.. that David Rome expounded on a little further, because it actually changed… I went back and changed one haiku. I had one haiku  (written) out at Rocky Flats and I realized that it lacked the comment. It was – “Blue sky/cumulus-clouded/over the white plutonium plant”. And that was all I had. And then I realized it was lacking something. – “Blue sky/cumulus-clouded/over the white plutonium plant” – it was sort of half of a haiku, or two-thirds of a haiku, but it needed some other jerk, and the first thing I thought when I looked back at the haiku, considering the third comment possible was, “Am I going to stop that?” – So that’s how I ended it – ““Blue sky cumulus-clouded/over the white plutonium plant/Am I going to stop that?” – The pun being, am I going to stop the blue sky cumulus-clouded and the equally mighty white plutonium plant? It wasn’t a great haiku but at least it filled out the form and made some little crinkle at the end.

AG: Though it obviously could be applied to anything, like I said – running an insurance business (for instance), in the sense that by observing the action of mind you do eliminate some of the aggression and confusion, (and)  impatience, and that’s good for business, as well as poetics. Good for anything! – Good for love-making! – Yes?

Student: He said that (in Tibetan poetry this happens) pretty much every time, or…
AG: Yeah. He said the first line always has the three, and every other line if possible. It’s amazing. And why not? In other words, each line would be a flash, recognition and comment. Each line. Any metaphor or any really interesting line would certainly have a blinding flash, ideally. A blinding flash, a recognition of what it is and the further capping it. Why not? Any poet could do that great. You couldn’t do it by formula. It’s not necessary to do it by formula. He’s saying, “The mind works that way, anyway”. However if you recognize it, you can probably work with it more easily. Just as I was able to add a line to (my) haiku instantly, digging what was lacking in the structure of the one I’d done.

Is that making sense? At all? It made a lot of sense to me. 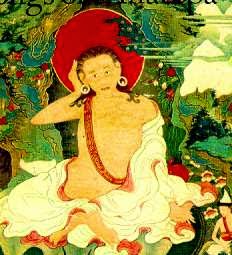 Student Do you know if this applies to the poetry of Milarepa?

AG: No, I’ve examined it, but, since he talked, I haven’t got to a book to examine it yet..

Student; Like The Songs of Milarepa. I haven’t read them in Tibetan.

AG: Yeah, we ought to get those in English, tho’

Student: He said that Milarepa was, like, common language, that it was written for the general man, so it didn’t exemplify all that stuff..

Student (2): The line didn’t (fall that way) if Milarepa wrote it

AG: I don’t remember if he said it did or didn’t (but) there’s a lot of formal Tibetan poetry where it probably would be applied like that.

Student: That’s what he seemed to be talking about. Formal, more than Milarepa.