Meditation and Poetics – (Haiku and Trikaya)

AG:  (I asked you to look at) forms and haiku structure. Does anybody remember that? – or did anybody notate (or make) notes on that?
Student: (I did and noticed…)
AG: Louder!
Student: (I did and noticed that there was writing specifically about something, and then..)
AG: Then you noticed what?
Student: The writing is direct, and then you notice, you know, that you register, say, the sunshine, and then you reverse backwards (to the source of the sunshine..) and…
AG: Yeah (but) how did that relate to the process of (the) thought-form itself?
Student: I think of an idea (or) remark, and then (next) would be the humor (in it) or perhaps (something of the content) ..

AG: Yeah. My own interpetation was (is) first flash, without words – this is a (the) description given by Chogyam Trungpa, in that last class, of the actual process of thought-form as discerned through the experience of meditating, observing thought-forms. So there’s the first flash (which is) nameless, as, the brightness of the sun, or, say, a face in the crowd. Second, an identification of it, or the name of it, or recognition of what it is – “my brother”, or “the sun” – Then, third, there’s an after-thought which automatically comes to mind in the form of your own take on it, or comment or moral or lesson, or point, or – third-thought, or (a) pointing (out) of relationship. 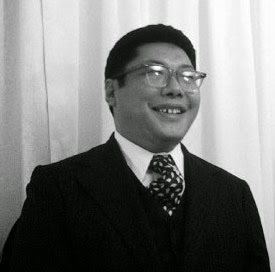 Now I had been talking before of haiku in terms of two dissimilar images (or) polarized images united by a lightning flash in the mind, relating them. I think his (Trungpa’s) description is more classic and probably more accurate to functioning of mind itself, but I think only through sitting, or some kind of observation of (the) formation of thoughts in the mind, would you actually begin to discriminate – How does the mind actually operate? (and the whole point of this course is “How does the mind actually operate?”). And if you can figure that out, can you then create a poetics on that basis? I guess that’s all understood, isn’t it? In other words, what I was talking about was a kind of naturalism, but the naturalism was, although I was talking about seeing external objects and making use of those, the whole point was, “What was your first thought?” (and then, “what was the second thought?”). Trungpa suggested the third thought.

And, in considering the classic haiku of Basho…that we didn’t (get around to) cover in the list

Everybody knows that haiku? – Has anybody not ever heard that? Everybody who has heard it, can you raise your hand? [majority of class raise their hands]. So it’s pretty universal. It’s a universal haiku. So let’s dig that a moment, because (Mitchell ? (sic)), I guess it was, and I, the other day, finally translated it almost perfectly. We finally arrived at the perfect American translation of the classic Basho. Our version was.. – (Allen is momentarily put off guard – “I need attention, Kate. You should have sat. Otherwise you wouldn’t have been so distracted”)]

The “kerplunk” is accurate because the Japanese haikuactually has at its end an onomatopoeic word for the sound of a frog jumping in water, and “kerplunk” fits the bill. ”Kerplunk” is actually perfect (for) that. 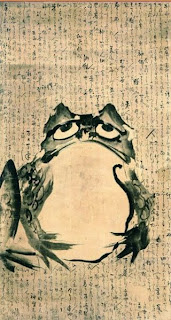 I was trying to relate that to Trungpa’s pronouncement. “Old pond” is the pool, the flash, the open space, the hole, the emptiness known in Buddhism as dharmakaya – the World of Dharma, or the World of Law, or the Unborn, the Unconditional Mind, Mind without conceptions, (which does not receive impressions, perhaps). So dharmakaya, or Nameless World, or Unborn World – “Old pond”.
“Frog jump” – the equivalent in Buddhism would be nirmanakaya – the world of names and forms – “kaya” – world – the world of names and forms. The union of Emptiness and Form, of dharmakaya and nirmanakaya is the Body of Bliss called samboghakaya. S-A-M-B-O-G-H-A-K-A-Y-A –  dharmakaya, nirmanakaya, samboghakaya [the Trikaya]. There’s always been that triple conception in Buddhism. They correspond also somewhat (to) Hinayana, Mahayana, Vajrayana. It also corresponds to the Buddhist notion of ground – old pond, the first flash – path – the recognition – and fruition – the personal application or comment. The Vajrayana would correspond to the fruition, personal application, comment.
So you could line it up Hinayana, Mahayana, Vajrayana., (or) Dharmakaya, Nermanakaya, Samboghakaya, or Ground, Path, Fruition, (or) Dharma, Sangha, Buddha – the Three Jewels, the traditional Three Jewels. Dharma, Sangha.. actually, Dharma would be, perhaps be.. it might be Buddha,the open mind, Dharma, the recognition and laws of that, Sangha, the community of people acting on that understanding , so that would be the personal comment or embodiment of it.

So the ideal poem or the ideal haiku would contain Emptiness, Form, and some kind of jokey humorous blissful understanding of both – co-existence. There’s a funny kind of intellectual structure possible. As to whether or not it actually applies, this general theory, you’d have to do it by examining haiku themselves

There are some more practiced Buddhists here [in the classroom at Naropa] who will perhaps recognize the terminology, and I’m not necessarily insisting on that as an ultimate theory that everyone’s got to memorize and act on, but considering Trungpa’s comments it’s a kind of interesting collocation of trine, of three-part conception. (And), as to whether it actually works in the mind, I think it probably is so. And I think if you examine haiku, you’ll find that a lot of them do follow some kind of pattern of a flash, a recognition, and (then) a weird or wild comment.