AG: So this is obviously one proceeding from meditative state, now.

[(the green peppers, or peppers growing on the vine)

“The morning after the gale, too/the peppers are red” 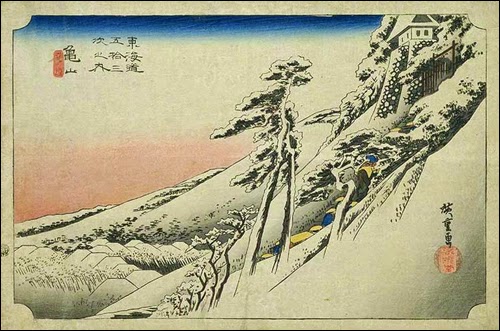 That’s typical of William Carlos) Williams, that style or that kind of observation. Williams and (Ezra) Pound did begin to derive from haiku (We’ve got to remember that Pound translated some Chinese and Japanese poetry and did actually try to work on haiku, around the turn of the century.)

Who is it that grieves?
The wind blowing through his beard
for late autumn.

(You might say that’s an Objectivist poem, in the sense that it’s the thought in the mind of the observer, but it’s sort of (an) impersonal observer looking at his own impersonal self)

Who is it that grieves?
The wind blowing through his beard
for late autumn

A flying squirrel
is crunching a small bird
on the withered moor.

The moon
coming back with me from the mountains
entered the gate together with me. 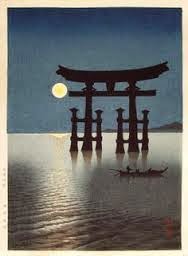 (That’s so sort of subtle. There’s a lot of little things about distance and dealing with space, distance, actually – dealing with the sensation of space using moon as coordinate – or scarecrow as coordinate. I think there’s a haiku)

Walking through the autumn moor
the scarecrow
walked with me

(That is a common observation (from) walking – a distant object seems to move – which conjures up the sensation of space, without having to yatter about space all the time.)

Now this is a little Wordworth-ian.I think I had mentioned “green to the very door”. Have we worked on that?  Yes

Ivy creeps
over the wooden door
under the evening moon

AG: Yeah. You get the opposites. You get all the opposites. But my own insight constantly is that the space is the key. Like in (Paul) Cezanne. It’s the reconstruction of a little sensation of space, (which, in his canvases, Cezanne pointed out as pater omnipotens aeterna deus – eternal father omnipotent – eternal god – but some eternal quality of space itself, which is silent), which is constantly conjured up in these by using coordinates within space to present the space, without referring directly to the space, because, as Francine said, (there’s) the space itself or there is something that is not nameable. You could call it space, but by presenting sharply defined objects in relation within it you do conjure it up. It’s that same space that we practice appreciation of by meditation – through breath flowing out into space, mixing mind with breath, mixing mind, mixing breath with space, mixing mind with space. So that every breath becomes a haiku – Yes?

Student: Also a sense of time, too.
AG: Yes. Well..
Student: (Like the ivy on that) house…
AG: Yes
Student: (..seems to be in this poem)
AG: Oh, in this, yes.
Student: (Emptiness in time?)
AG: Yeah, Well, maybe the time.. the emptiness there of nobody there anymore, perhaps So, a long time gone since that house was dwelt in.

There is space and there is time.