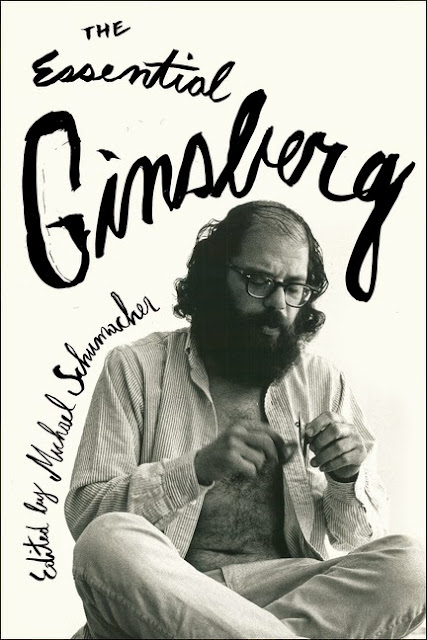 and, next week in L.A 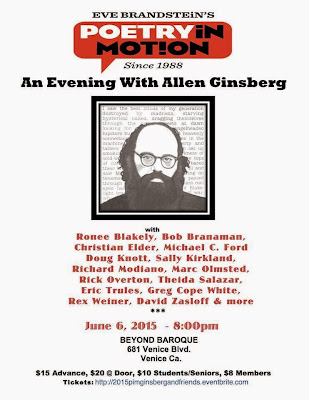 More shout-outs for Allen. Last week we quoted the hook-line by Anne Waldman that appears on the back jacket of The Essential Ginsberg.

“Allen Ginsberg brilliantly adhered to the poet’s job of looking into the darkness of his time, seeing the generative aspects of imagination, composing texts as orality and believing in the power of poetry to re-awaken the world to itself. He never lost that faith and manifested it in myriad directions with as empathetic a heart as I have ever known. His humanity embraced others all over the world. His spirit matches Whitman for its profound candor, adhesiveness and trickster transgression. When planet earth is dust this will be one of the books to take to Mars to remember us.” 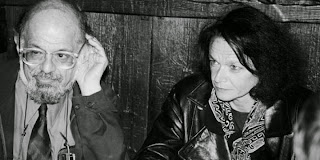 (His) (Allen’s) work can really be explained through the Hegelian stance…which involves the so-called “spiritual self-consciousness”, otherwise referred to as action and determinateness. And, in order for us to understand Ginsberg’s really innovative “determinate and original individuality” as exemplified in his poetry, one would have to go even further back to Plato’s Politeia, where the ancient philosopher describes the written word as “the shadow of the living one”, the one which is (according to Socrates) inscribed in the mind of the teacher, “the word that speaks to the man who can get it but is always silent to someone who can’t”. Of course, Allen was, and is, much more than the written word to me: he was a precious teacher, an oral griot and a shaman who followed Woody Guthrie to the letter in combining the spoken word with music and the scores, etc. He always reminded us (his students at Naropa), that “music unnaturally divided from poetry” with the Tenth-Century Church of performers, and that it was our role to put it back together. I tried, in my personal work, to follow his advice.”

Read more of Nina Zivancevic on “The Beats” here 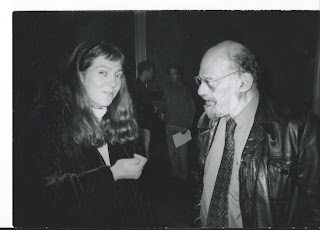 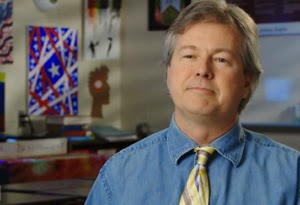 Mark Joseph Stern in Slate reported on it – & 763 comments (wow! – how come The Allen Ginsberg Project doesn’t get that kind of feedback!) Among the most significant comments/responses was this one (from one Michael Pemulis” (sic)):

“This is hard for me, because I actually had Mr Olio as a teacher twice in high school. I say without hesitation that, of all the teachers I had, he was the best. If it wasn’t for his insistence that I push myself to improve my writing, I would not have advanced as far in my career as I have so far.For what it is worth, many of my classmates (I graduated in 2000) would also tell you that he was a great teacher who truly engaged students and pushed them to challenge themselves.The poem was probably a bit too graphic for high school. That being said, as an AP English class, many of the students will be in college later this year where they will be exposed to all sorts of graphic material and no one will bat an eye. From what I have heard, the firing was partly political. The school superintendent’s contract is up soon, and she didn’t feel as if she had any choice but to begin his termination. The teachers contract will also be up for negotiations soon and the union was worried it would hurt their bargaining power Mr Olio without doubt made a large mistake. But his firing will certainly deprive my high school and home town of a terrific teacher. Students will be worse off for it.
In the end, there are no winners here. Only losers. I just hope Mr Olio ends up back on his feet.I would caution other commenters, like some below [sic], to stop speculating about his record as a teacher prior to this incident. In this case, you really have no idea what you are talking about.”

Another measured response came from Clyde Selner in the Hartford Courant (the local media have been, perhaps not surprisingly, (politics again), less than sympathetic

“Mr Olio apparently made the mistake of treating his students as young adults, college students. Despite the difficulty of the material, he took a student’s request to submit the poem for class discussion seriously and expected the class to respond in a like manner. “Please Master” (the poem) would be fodder for thought-provoking topics such as: Why does the poem have the power to elicit such strong emotions? Did the author write it just to prompt the very reaction it received? Would reactions be the same if it were about heterosexual instead of homosexual sex? Instead students witnessed what happens when you cross the invisible line surrounding what authority considers acceptable discussion topics..”
Kathy C”, one of the parents of one of the students, wrote here about the case (picking up on that very point):

“When my daughter first told me about the class in question, she told me that some students were uncomfortable with the poem content and complained to their parents and the parents in turn complained to the school. My first question to her was “when the poem was being read, did anyone ask Mr Olio to stop playing it?”. Answer: “No”. I’m quite certain that had any of the students asked Mr Olio to stop the reading he would have done so right away.There is a line between being provocative and being disturbing and for some this reading crossed that line but it didn’t cross the line for everyone. I don’t know how Mr Olio was supposed to know that it was provocative with one person but offensive to another without students speaking up. I spoke on behalf of Mr Olio at the Board of Education meeting on this very premise. It’s my belief that this whole situation should have been handled by the students and Mr Olio and not by the parents and administration.

When the suspension first took place my daughter was very upset about the situation and the media firestorm that followed. I told her to stay away from the media because even comments intended to help would continue to add fuel to the fire and keep the story going. I was hoping that once the media situation died down that the administration would be able to quietly bring Mr Olio back from suspension. At the Board meeting I found out that the school had initated termination proceedings against Mr Olio. If you could have been at the Board meeting and heard person after person, including present students, speak about how inspirational Mr Olio is as a teacher, you would find this move as baffling as I do. I can only surmise that this action is less to do with what the administration actually thinks of the situation and more to do with the fact that they don’t know how to bring back a teacher who has been branded by social media as unsuitable for the job. Ironically, the very same rights that allow the news and social media to paint this picture are the very same rights that Mr Olio allowed the students to exercise in that class.”

Another irony “Kathy C” points out elsewhere (to Wonkette) – the student “who brought in the poem” (her daughter’s class-mate) “spoke at the Board of Ed meeting in defense of Mr Olio and wants to be a teacher because of him.”

The Daily Beast also picked up on the story. See their (David Freedlander‘s) account here.

An inspiring teacher, a challenging debate – who, exactly, is being threatened/”emotionally damaged” here?

Big kudos to our friend Steve Silberman in all this, who has tirelessly taken on the case (making the initial connections of support during Olio’s legal proceedings – (Lawrence Ferlinghetti – “As the original publisher of Allen Ginsberg’s poetry, City Lights Books  fully supports David Olio as a high school teacher of poetry..” – Helen Vendler: “…asking students to bring a poem to class does not violate the curriculum; on the contrary, it asks that the student make an investment in his own education…” )  – and instigating this – the all-important debate/publicity, “putting the word out” – the Slate (which-begat-the-Wonkette-and-begat-The Daily Beast) connection.  For his sterling  services, thanks. 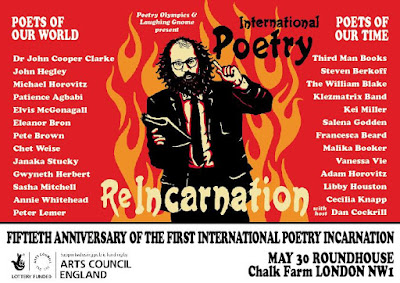 and on Wednesday (Allen’s birthday) at Blackwell’s in Oxford – “A Celebration of 60 Years of City Lights Publishing” – “To celebrate 60 years ofCity Lights Bookstore and Publishers, we’ll be hosting a very special evening of readings from selected authors published by City Lights including Jack Kerouac, Allen Ginsberg, Gregory Corso, Lawrence Ferlinghetti and more…” Readers on that evening include Dan Holloway, Alan Buckley, Daisy Johnson, Tom De Freston and Kiran Millwood Hargrave“..”A similar celebration will be taking place across the water in Paris, where our comrades in the trade, Berkeley Books, will also be celebrating in their own way”. 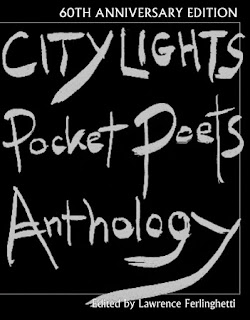