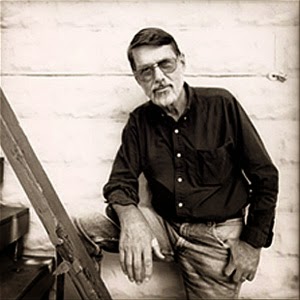 Last weekend, we featured Allen reading (from “Kaddish” and other poems) as part of the Robert Creeley audiotape collection, (now lovingly engineered and digitalized and made available on the incomparable PennSound site).

This weekend, we spotlight another one, a reading, some years later, from 1978, (in the Kiva Room at the State University of New York at Buffalo, where Creeley was then teaching, the first recipient of the chair of David Gray Professor of Poetry and Letters – he would later be promoted to the position of Samuel P Capen Professor of Poetry and the Humanities – In 1991, along with Charles Bernstein, he co-founded the on-going and lively Buffalo Poetics Program)

This reading, from October 5, 1978, features (and concludes with) a reading of his then recently-completed long-poem of nuclear protest, Plutonian Ode
(this may be compared with alternative readings made available on the Allen Ginsberg Project here and here) 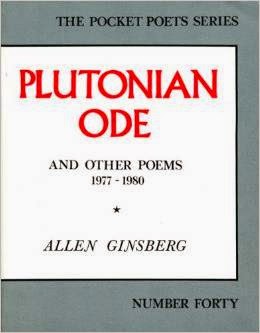 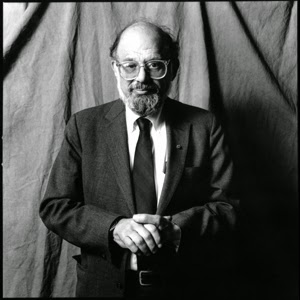 Allen Ginsberg at State University of Buffalo, 1978, a vintage audio, may be heard in its entirety  here

Allen begins with a brief song (accompanying himself on the harmonium) by William Blake  – “I’ve been working on (William) Blake’s Songs of Innocence and Experience and put music to most of the songs, and this year (1978), working with “The Tyger” and a song that I had never understood before, “My Pretty Rose Tree”, a little, slight two-stanza lyric (the music I’m sort of improvising)”….”What interested me is, “Such a flower as May never bore” (meaning an unearthly flower, such as William Carlos Williams mentions in “Asphodel..”) – “A flower was offered to me/Such a flower as May never bore/But I said I’ve a Pretty Rose-tree” – So he’s.. he wants his earthly flower, his mortal, transitory, vegetable flower, but then, when he gets his transitory vegetable flower – “(the) thorns were my only delight” 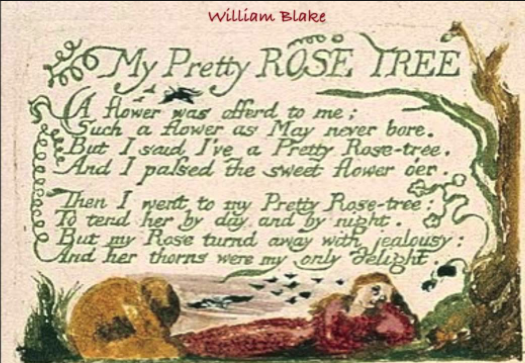 Allen continues:  “I’ll read poems written since I was here in Buffalo last, (in 1975).

“In September (19)75, I went on a three-week meditation hermitage, alone, with the idea of not writing anything (also), that is, just do(ing) Buddhist-type sitting meditation, and, because I wasn’t trying to convert my experience into language, wound up seeing more precisely than I had before, with a writing habit, and a few perceptions remained stuck in my mind. So when I got out (on September 16) I wrote down a few fast poems. So these are haiku. written after several.. after a couple of weeks of sitting alone in a cabin in the Rocky Mountains

“Sitting on a tree-stump with half cup of tea,/ sun down behind mountains -/ Nothing to do.” – “Not a word! Not a word!/ Flies do all my talking for me -/ and the wind says something else.” – “Fly on my nose/ I’m not the Buddha/ There’s no enlightenment here.” – “Against red bark truck/ A fly’s shadow/ lights on the shadow of a pine bough.” – “An hour after dawn/ I haven’t thought of Buddha once yet!/ – walking back into the retreat house.” – ” – and “Walking into King Sooper after Two-Week Retreat” (“an instant karma shot”) – “A thin red-faced pimpled boy/ stands alone minutes/looking into the ice cream bin.” – (There was a similar haiku I’d written on an earlier retreat which was “Snow mountain fields/ seen thru transparent wings/ of a fly on the windowpane.” – that is to say, the perception becomes clearer after clearing the mind – you can even see a snowfield on a mountain through a fly’s wing on the window-pane, or you might notice it, with an attentive eye).”

“And in October that year, Gospel Noble Truths, which is a gospel style blues featuring the Three marks of existence – suffering, change and ego-lessness (that is, no.. empty of ego, (as) the universe itself), the Four Noble Truths – the Eightfold Path, instructions for sitting, and a review of the six senses.” 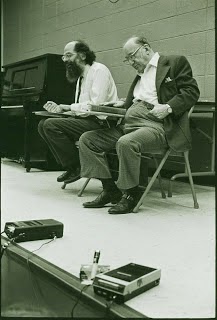 “Don’t Grow Old” is a series of poems written in January to July 1976, with several additions done last night and into today, on the death of my father, Louis (Ginsberg), who was a poet – in seven parts… (no) nine parts – so nine seperate sections..”

“and my Father died while I was in Naropa Institute teaching, after being away for several weeks and so I flew home to the funeral and wrote a song – “Father Death Blues.” 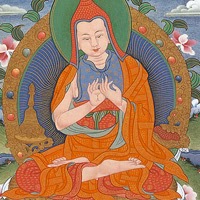 “There is a Buddhist slogan (the notion of slogan precedes Mao Tse Tung, it’s a traditional Chinese form, (the) slogan) which says “Drive All Blames Into One”,
which is to say, take the great stinky ball of blame that nobody wants, put it all in one, and take it, because it’s empty, so what difference does it make?, then you can get on with trying to figure out what to do with the situation , beside blaming something, or somebody else, for it.”

“From a longer poem [“Contest of Bards“], a song called “The Rune”. The..  I was reading a lot of (Thomas) Campion (and (Bob) Dylan, actually) – with Dylan and Campion and (I) tried to write a (sort of) silver lyric.” (It’s part of a longer poem called “The Contest of Bards” and it’s a sort of a riddle poem in the middle of the longer epic work)”
(Allen is accompanied on vocals here by Peter Orlovsky) 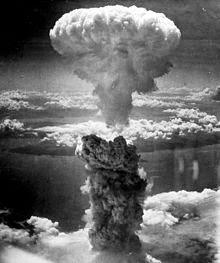 “I’ll finish with a Plutonian Ode , a longish poem (it’ll take about ten minutes), written this summer (1978). Peter (Orlovsky) and I were involved with Rocky Flats nuclear facility Rockwell war-plant anti-nuclear protests near Boulder, Colorado, and one.. I got more involved thinking about it, and wrote a long poem, and the next morning one of the Rocky Flats Truth Force workers came and said that there was a train coming through with fissile materials and some of the Rocky Flats Truth Force people were going to sit on the tracks in front of the train to stop the train, (as was their want – about seventy people had been arrested doing that, including Daniel Ellsberg, earlier)  (and) did we want to come out and join them? – and I’d just finished this long poem, and I said, “Yes, my script is written, so I’m all ready”. And then, a couple of weeks ago, I wrote notes to it because there’s confusing mythology involved, so I’ll read you the notes.”

“Dr Glenn Seaborg was officially, is officially, the discoverer of plutonium (in the third line, “Doctor Seaborg” is mentioned).  I’m talking about planets, Uranus (like “uranium” – plutonium is uranium-enriched)..so, among the planets, there’s Uranus, and then there’s Neptune (ocean), and then there’s Pluto.  I mention “Fish”, “Crab”, “Bull”, “Ram”, “Lion” – those are the astrologic constellations (we just left the age of Pisces, theoretically, according to the astrology columns in the newspapers, and are going into the age of Aquarius – two-thousand years each. Each age is considered to be two thousand years, and of the twelve signs, twenty-four-thousand years, and that was known by William Butler Yeats and Plato as “the Great Year” (of twenty-four-thousand years), the Babylonian Great Year, or Platonic Great Year, (meaning the time it takes for us to pass through..for our solar system, I guess, to enter and pass through, each of the major constellations). The center of our galaxy, actually, is in the direction of Sagittarius. Twenty-four-thousand years, this “Great Year” is also, amazingly, the half-life of plutonium (so this is a way of getting poetic scale to the political fact that we have created a new element, the heaviest element, (heavier than uranium, next to plutonium – there are new elements, since then, heavier – caesium – but the heaviest element created at that time – plutonium, and its half-life is twenty-four-thousand years, exactly the same as the Great Year) (and) so..
That gives you some idea how long we’re going to have to take care of West Valley, New York [sic] ‘s old nuclear plant, (that’s sort of half-sunk in the earth and closed up and nobody knows how to deal with the nuclear waste and get rid of it).  So… the full-life is two-hundred-and-forty-thousand years, two-hundred and forty-thousand millennia, before it becomes physically inert and un-dangerous. If the “Great Year” is twenty-four-thousand years and Earth is four-billion years old, that means we’ve gone through the “Great Year” a-hundred-and-sixty-seven-thousand times (a little) piece of information…”

“And did I mention  “Hanford, Savannah River, Rocky Flats, Pantex, Burlington, Albuquerque“? – those are towns where there are plutonium factories, where the plutonium is made (in the first two cities), where it’s fabricated into bomb.. three-pound bomb-triggers at Rocky Flats (each bomb-trigger is the size of a Nagasaki-size explosion, and that’s the trigger for a hydrogen bomb ten thousand times that strength…  And then the old bombs are stored at Manzano Mountain, outside Albuquerque, So I’m mentioning the towns and the states.”

“One single pound of plutonium scattered throughout the Earth is supposed to be sufficient to wreck all human life, if it is scattered equally. One atom to one lung is enough to cause cancer.  And (then) there is the mention of “the Six Worlds”, (which is a Buddhist notion of  six psychological states – world of bliss, (world of) gods, human world, world of angry warriors, world of hungry ghosts, hell-world, and animal world. And there are now three-hundred tons of plutonium, (estimated, 1978, amount) produced for bombs (the United States has thirty-thousand such bombs and Russia twenty thousand). There’s mentioned also the temple, the single temple, at Eleusis, which is the temple to Demeter, where Pluto and Hades ((the) god of Hades) was also worshipped. Pluto’s always bad news (as in Chaucer)  (in “The Merchant’s Tale“), wherever he appears, god of the underworld, he stole Spring-time, Persephone, from Earth-Mother, Demeter, took her underground for half (of) the year. Libations to Pluto were honey and water poured on the floor of the temple and black sheep throats were cut (but the priest’s face was generally turned away from underground, he wasn’t supposed to look).”

“And the estimated world military budget 1978 is five-hundred-billion dollars (just Russia and America and China and everyone)…. two-hundred and seventy-five thousand dollars a minute – or five-hundred billion a year.
And I mention the word (s) “pacify”, “enrich”, “magnetize” and “destroy”, (which appears earlier in twentieth-century American Literature in “Give, sympathize, control” (“Datta, dayadhvam, damyata“), (at) the end of (T.S.) Eliot’s (The) Waste Land. (“Magnetize this howl with heartless compassion, destroy this mountain of Plutonium with ordinary mind and body speech”). They are aspects of, or characteristics of, Buddha-nature – that it pacifies, enriches (pacifies where it can, enriches what’s lacking), magnetizes and draws together, attracts, and what it can’t deal with, destroys, (what ignorance is dissolvable, destroys).