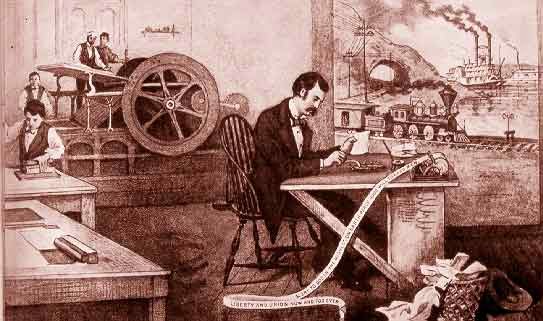 “The jour printer with grey head and gaunt jaws works at his case/He turns his quid of tobacco, his eyes get blurred with the manuscript.” (Walt Whitman)

AG: So the Whitman section 15 of “Song of Myself” in Leaves of Grass is a pretty good example of somebody paying attention to detail. Now in this case you don’t have to write a big poem with a theme (though there’s an underlying theme), with a single central theme, no, no need. At least have things that you saw. At least you’ve got in here things seen and heard – “The pure contralto sings in the organ loft” – Well, that’s “the pure contralto”. It’s a little poetic, but it does give a quality of voice – a “pure contralto”, and at least he puts her somewhere – up “in the organ loft”. So you have a whole Sunday scene – “The carpenter dresses his plank” – Well. that’s pretty technical. actually – dressing the plank. Dressing means smoothing out. So already he’s got a little bit straightforward there, he’s got a little defined there. It’s not just a carpenter hammering a nail, he’s got him dressing a plank – comma – “the tongue of his foreplane whistles its wild ascending lisp” – (that’s really good – he actually reproduced.. what is a “foreplane”? Does anybody know?)

Student: (A foreplane is used in sailing)
AG: What was it?
Student (2): It sounds like he’s talking about some kind of block..
AG: Yeah
Student (2): (..of wood, and some sort of tool..)
AG: Yeah
Student (2): Yeah
AG: ..that would have a “wild ascending lisp”. That is, as you went through it would go r-r-r-r-erp along the wood.
Student: (Is it a relatively common thing?)
AG: Not any more. The nearest thing I associate it (with) is when you push a block of wood through a circular saw (for that “wild ascending lisp”) – But he’s actually just made this little sketch, using even an obsolete word, and an experience that we haven’t ourselves experienced directly, but it’s conjured up or reconstituted an actual situation which is solid, solid enough to grasp and enjoy.

[Allen continues] – “The married and unmarried children ride home to their Thanksgiving dinner/The pilot seizes the king-pin, he heaves down with a strong arm” – (So he’s at least got the gimmick there, which would be the king-pin – some technical object in the field of work or in the emotional field or in the field of observation – a pin, itself). “The mate sands braced in the whale-boat, lance and harpoon are ready” – (So there it’s actually physically braced in a whale-boat) – “The duck-shooter walks by silent and cautious stretches,/The deacons are ordain’d with cross’d hands at the altar/The spinning-girl retreats and advances to the hum of the big wheel” – (Where did he see that? But there’s really something that he actually saw, or read about clearly enough to reproduce) – “The farmer stops by the bars as he walks on a First-day loafe and looks at the oats and rye” – (So that actually has within it some actual knowledge of when there is a rest and where there (are) oats and rye – “First day loafe” is what? Sunday?

Peter Orlovsky (sitting in on the class): A what? a what?

AG: “A confirmed case” – (But that’ (a) really terrific trick, because everybody’s got a lunatic in the family who was carried to the asylum “at last”, after putting up with them for weeks. So it actually captures the whole psychological story-line, soap opera. He’s got it all there in that one “at last”). It’s not just “The lunatic is carried to the asylum. waving and screaming” (but) “..carried at last”. He’s got the whole family case there.
Then he adds, on top of that – “(He will never sleep any more as he did in the cot in his mother’s bedroom)” – So the entire soap opera is there.

“The jour printer with gray head and gaunt jaws works at his case” – (Okay, so if you’ve never seen a printer, at least you can give him gaunt jaws out of your imagination – or, presumably (he’s) seen a gaunt-jawed jour printer. “Jour”? What does “jour” mean?

Student (Bobby Myers): Journeyman
AG: Really?
Student (Bobby Myers) : Yeah, sure.
AG: “Jour”? oh. I thought it was like “dour”. The “dour-jawed printer”. The journeyman printer?
Student (Bobby Myers): Yeah
AG: And why do they say “the jour printer”? Is that common?
Student: No, it’s not common at all these days. But like I say (when) they spoke of..He was a printer..
AG: Yeah
Student” So he was a “jour printer”..
journeyman printer, (so he recognized that technicality). But then, “gray head and gaunt jaws works at his case”, (so he knows a printer works at his “case” – “case” – technical word – but it’s still a little bit (that) he’s just working at his case – so what? – that’s no big deal). So – “He turns his quid of tobacco while his eyes blur with the manuscript” –
n other words, if you don’t get it the first time, if you’ve got the platform to go on from, then get something else in, add another line, but get it in, nail it down, one way or another.

Student: He turns what of tobacco?
AG: “(H)is quid of tobacco”
Student: What’s “quid”?
AG: A tobacco quid is the…
Student 2: Plug
AG: Plug, now. He turns his plug of tobacco. Is there a difference between a “plug” and a “quid”? – except the century? – yeah, century.

“The malform’d limbs are tied to the surgeon’s table/What is removed drops horribly in a pail” – (“Horribly in a pail”!) – “The quadroon girl is sold at the auction-stand, the drunkard nods by the bar-room stove..”

Peter Orlovsky: What’s a “quadroon girl”?
AG: Quarter-black. or quarter white? Which?..
Student: Quarter something..
AG: Quarter black – Okay, now, “the quadroon girl is sold at the auction-stand”, I don’t know if he saw that or witnessed that. That is a little bit abstract in the sense of “quadroon girl” (and) and “auction-stand” – yes, yes. So it needs more in the line, either to buttress the line or to give it a little more solidity or density. So he’s got a drunkard “nod(ding) by the bar-room stove”, digging the quadroon girl being sold at the auction –stand, or you can separate them out, but at least the line, when you put the two elements together has some kind of drama, or has some possible drama.

“The machinist rolls up his sleeves, the policeman travels his beat, the gate-keeper marks who pass..” – (Okay. he’s got one little bit of information about each. (A) little triplet line. Each separate, but at least one mark of existence for each – rolling up the sleeves, travelling his beat, marks who pass) – “The young fellow drives the express-wagon, (I love him though I do not know him) – (Well, that’s something there) – “The half-breed…” – (Well, I guess it was somebody he.. I wonder how he made that up, actually? – Did he have a real “young fellow” he saw, driving the express wagon, through the window, as he was writing this poem? Maybe? Or some flash of recollectuion of someone he saw?)
“light boots to compete in the race” – (That’s very complicated – a half-breed, strapping on boots, competing in the race. That’s a whole world of suggestion for (a) social situation) – “The western turkey-shooting draws old and young, some lean on their rifles, some sit on logs,/Out from the crowd steps the marksman, takes his position, levels his piece./The groups of new-come immigrants cover the wharf or levee,/ As the wooly-pates…” – (“the wooly-pates”! – if only Amiri Baraka was here!) – “As the wooly-pates hoe in the sugar field,” – (except that it’s also somewhat (an) accurate observation, oddly)

Peter Orlovsky: Wooly-pates?
AG: Wooly-pates.”Pate” is head – wooly head. For black men – wooly-patesAG: A pate is the top of the skull, You know, like a “bald pate” – “He covered his bald pate with a toupee”
“As the wooly-pates hoe in the sugar field, the overseer views them from his saddle,/The bugle calls in the ball-room, the gentlemen run for their partners, the dancers bow to each other,/The youth lie awake in the cedar-roof’d garret and harks to the musical rain” – (Well that “cedar-roof’d” is so good there, because it really gives you the whole musty possibility of a rainy atmosphere, especially with the cedar itself, (it) suggests odor, color, texture (and the) actuality of a roof. He could have said, “The youth lies awake in the attic and listens to the rain,” but “the cedar-roof’d garret”)