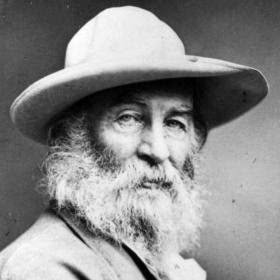 AG: Then he (Walt Whitman, in “Song of Myself”) goes into a section, in (section) seven, which is more and more close to (William Carlos) Williams’ sense of accommodating inquisitive mind – [Allen reads from Whitman’s “Song of Myself”] – “Has anybody supposed it lucky to be born?/I hasten to inform him or her it is just as lucky to die, and I know it./I pass death with the dying, and birth with the new-wash’d babe, and am not contain’d between my hat and boots,/And peruse manifold objects, no two alike and every one good,/ The earth good and the stars good, and all their adjuncts all good” – (This is where people began making fun of him, because at this point he’s ideologically extending his acceptancy to a point of what would be called around here “idiot compassion”) – “I am not an earth, nor an adjunct of an earth,/I am the mate and companion of people, all just as immortal and fathomless as myself” – (“fathomless” there would be equivalent to what I was talking about as “unborn”, “unborn” would be “fathomless”, that term – I was using that here, wasn’t I? – “unborn”? – actually, I hadn’t thought of that, but the Western poetic equivalent to the Buddhist term “unborn” would be “fathomless, in the way that Whitman uses it here] – “I am the mate and companion of people, all just as immortal and fathomless as myself/ (they do not know how immortal, but I know)/ Every kind for itself and its own, for me mine male and female/ For me those that have been boys and that love women/For me the man that is proud and feels how it stings to be slighted..” – Yes) – “For me the sweet-heart and the old maid, for me mothers and the mothers of mothers,/ For me the lips that have smiled, eyes that have shed tears,/For me the children and the begetters of children./ Undrape! you are not guilty to me, nor stale, nor discarded,/ I see through the broadcloth and gingham whether or no/ And am around, tenacious, acquisitive, tireless, and cannot be shaken away” – (And that’s where he gets identical with (William Carlos) Williams’ description of his smell – “(T)enacious, acquisitive, tireless, and cannot be shaken away”. And it’s amazing that this particular quality of mind (the tenacious inquisitiveness, or acquisitiveness), that would be the chief characteristic of the expanding awareness bodhisattva nature as described in traditional Buddhist Mahayana discourse. From unobstructed mind (that is, unprejudiced mind), from unobstructed mind, because there is no obstruction so there is penetration of intellect, or discrimination, or understanding, into every corner of the universe, or every corner of phenomena that’s perceived. So that quality of inquisitiveness then, is what, apparently, I would guess, is the inquisitiveness which is identical with the all-accommodating quality – total curiosity, unprejudiced curiosity (therefore accommodating to any phenomena – in this case the homosexual phenomena). Does that make sense?

So I would say his “soul”, finally, would be that inquisitive, accommodating energy and awareness, which is what his “Person” or “self” is finally related to.