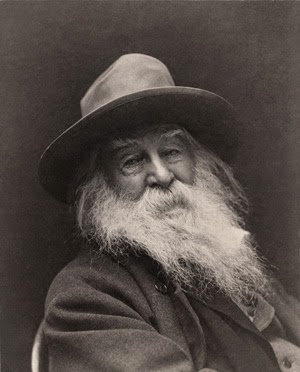 AG: I’m extending this discussion so far because, when considered this way, it does bring up the problem, then, (of), has he (Whitman) given up his self, or is he actually trying to find a way to fit himself in, without sacrificing self? He’s not giving up love at all, he’s not giving up his private parts. And from that point of view, there are a few poems that he wrote in old age that are, like, a funny commentary on this idealism. In “Sands at Seventy” (on page three-hundred-and-ninety-four of the Modern Library book), there are a couple of real interesting short notations in his old age – [Allen reads from Whitman] – “As I sit writing here, sick and grown old,/Not my least burden is that dullness of the years, querilties/ Ungracious glooms, aches, lethargy, constipation, whimpering, ennui,/May filter in my daily songs.” – (There’s another, more realistic, view, imposed by suffering, of old age – and in another – “Queries To My Seventieth Year”) – “Approaching, nearing, curious./Thou dim, uncertain spectra – bringest thou life or death?/Strength, weakness, blindness, more paralysis and heavier?/Or placid skies and sun? Wilt stir the waters yet?/Or haply cut me short for good? Or leave me here as now,/Dull, parrot-like and old, with crack’d voice harping, screeching?” – (I thought it was great that he includes that, when he got old enough, to include that view of self, rather than the noble erotic self, the constipated, screeching, harping.) – So I would say from those old age poems that he was making an accurate record of the phenomena of self as it appeared, when it appeared, and that he was not clinging, necessarily, for any fixed identity for that self, or fixed noble ideal for that self, but was able to include all the variations, or all of the changes, sufficient to make it an ugly self, or to present the ugliness of self-hood as well as the beauty. There’s a kind of prajna or wisdom in that, (and) generosity, certainly a lot of patience. So I would say, basically, he passes the line. He passes and gets an A, or an A-minus, or something, An A-minus in Egolessness. Because there is that frankness and willingness to acknowledge any thought, any change.