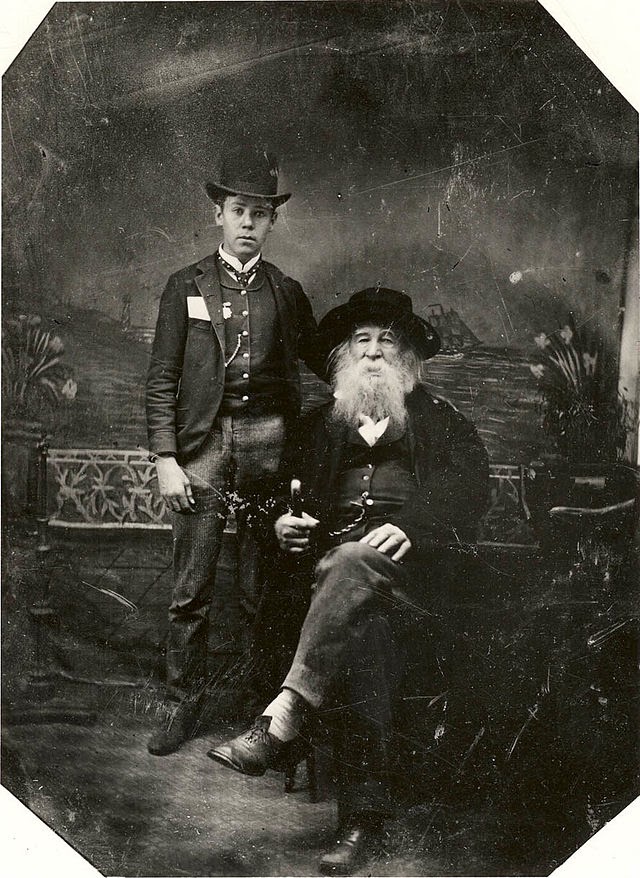 Gregory Corso: Al, excuse me, how did the Russians take that book (Leaves of Grass). They don’t mention his homosexuality, you know, but they..

AG: No, nor in America was that mentioned.

Gregory Corso: He made it with the guy who slept with Whitman.

AG: Under the coverlet. Edward Carpenter explained that Whitman had blown Carpenter when Carpenter was a young man. So that was, I think, the first documentation  (which is kind of interesting, that Whitman had been able to – not hide, but – not assert his gross physical situation – if it were to be considered gross – as it was in those days). I always thought that because he couldn’t assert his gross physical situation, the emotions then had to be generalized, disguised even, but generalized into comradeship, adhesiveness, empathy, sympathy, universal compassion, then he had to include women, (and) then he had to include everybody, if he was going to cover himself as a theorist…

(But) on the other hand, he’s trickier than that. It isn’t just a psychological ploy.And when I use terms like “cover”, “closet”, “psychological ploy”,  I don’t mean to be insulting. I’m just using common, somewhat vulgar, vocabulary for suggesting the directions that Whitman took to resolve a very complicated social problem and artistic problem and psychological problem and balance things out with a good deal of intelligence. Yeah?

Student: So, in a sense, he was writing for a gay (audience)