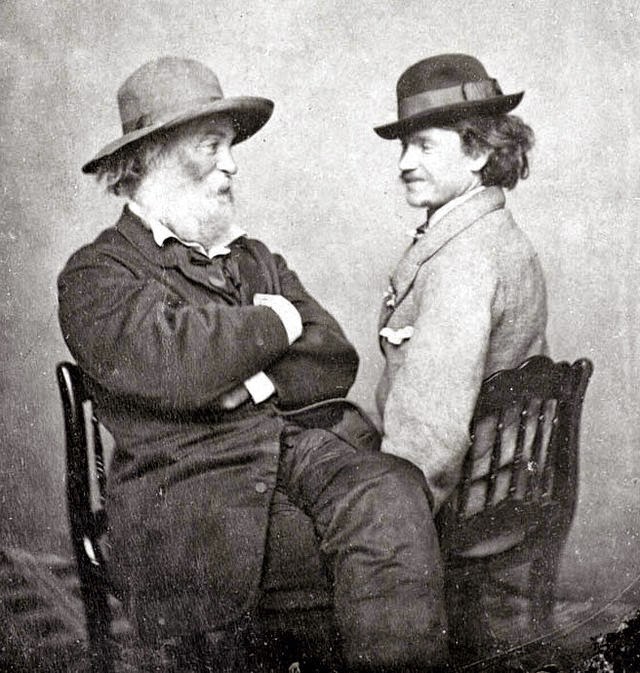 AG: I think he’s just covering himself. He covers himself throughout the book Leaves of Grass)

He has a natural affinity towards women, actually. He had women friends and boasted that he’s had children too, that he had a jolly, boldly, sensual life in New Orleans when he was a young man. I think (Algernon Charles) Swinburne wrote him and said, “Are you gay?) (or queer? or are you homoerotic?” – I forget the word), after reading Leaves of Grass. And he wrote back a long indignant letter, saying that Swinburne had totally misinterpreted his emotions as expressed, that it had nothing to do with material contact, that it was just all comradeship, and that he’d had a vigorous sensual life with women, and had children, illegitimate children.
But my own reading of it is that, of course, he’s enraptured with the idea of extensive sympathy, and, by its very nature, if it would cover a criminal with a bead of sweat on his mustache, it would also have to cover women, it would have to cover mules (in other words, it couldn’t all be young boys,it couldn’t all be young workers glimpsed across a crowded bar, it would have to come.. because he was boasting of universal sympathy, so he has to make it good by applying it to the feminine)

There is a certain hypocrisy in it, I think. As I grow older I think there’s a certain hypocrisy in his attitude, in the sense that, given his time and place, he was still in the closet. There are a lot of declarations and realizations in his writing that he wants to write about men, and he resolved henceforth to write no poems but those of manly affections in some of the earlier poems, but to have a constant empathetic system, a consistent system of inviting his soul to cover the whole universe, he’s got to cover women, it’s logical.. Otherwise he reveals his hypocrisy (if any). So that there’s a constant effort to balance the male and the female in description. And, since he has to attend to it, he begins getting good at it, and, probably out of that ideological desire , (he) probably did, after a while, develop sympathy for women. Because it was just empty if you want to have a giant soul and be the spokesman of the giant universal one soul, which he is doing, saying that his sympathy penetrates everywhere, like William Carlos Williams’ nose, then he really does have to give a display of sympathy.

I don’t know how women read Whitman [to (female) Student] – What does it look like to you?

Student: Are you saying that you think he’s(being hypocritical) in that statement?

Student: I wouldn’t worry about it too much but I haven’t been able to read very much of it yet.
AG: Yeah. It’s an interesting thing to check out when you’re reading. I always wonder.. Yeah?
Student: I always thought (when he’d) mention women he would appreciate them
AG: I think intellectually, absolutely, philosophically, absolutely.
Student: It’s nice that he’s thinking of (them).

AG: Yeah, I think he’s making the gesture!  I think he knows better  – not “better”, I mean, he knows)  – but this section – is this a girl or a boy that “I mind how once we lay a transparent summer morning./How you settled your head athwart my hips and gently turn’d over upon me/And parted the shirt..” – and probably gave him a blow-job?” Doesn’t really matter. Ultimately, the emotion, the height or dearness of the emotion – the penetrancy and dearness of the emotion (is) equal either way. He was the first one to actually be able to display that dearness and completeness, naked and…almost nakedly (it’s slightly clothed). You’ve got to give him credit for that, I mean, an enormous breakthrough into Gay Lib (or, it’s not even Gay Lib, it’s an enormous breakthrough into the personal, into Human Lib, into Emotional Lib, into what other people were afraid to write about – either of men or women, actually). So it’s just an interesting point. Because I’m homosexual and I read Whitman and see where the lines flow and am faced with similar problems of wanting to be universal and at the same time having erotic preferences. So I notice how he goes about his business, his poetry business. It’s an interesting point. I don’t know if it’s much discussed, aside from insulting him. And there are writers, there are critics, that will insult him for being shallower in his emotions towards women than men. I think he made a very good balance, a good try. (He was) basically a good fellow.