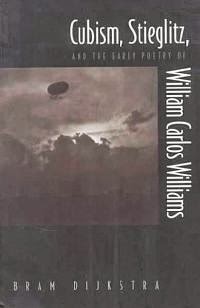 AG: Peter (Orlovsky) and I went and spent a little time (two hours) with her (Georgia O’Keeffe). She gave us raspberry juice from her own garden. Local particulars. She was really proud of home-grown raspberry-juice, and she had enough raspberries (at the age of ninety-one)  that she could actually offer a gallon of raspberry-juice, which was terrific. It’s like that (William Carlos) Williams poem (“A Poem for Norman Macleod”) – “No bull” – You can do a lot with what’s around if you know what’s there” – I read that, didn’t I? – “The revolution/ is accomplished./ noble has been changed to no bull” – The Indian that had gashed open the balsam to get a recipe for constipation for the prospector. “You can do a lot with what’s around you”. So she had raspberries.

[Allen continues reading from Bram Dijkstra’s The Hieroglyphics of a New Speech – Cubism, Stieglitz, and the Early Poetry of William Carlos Williams]

“Thus the artist could do justice to the object without forcing it to function as a metaphor for something else (in photography). The photographer must therefore begin by seeing all things with perfect precision, perfect penetration. If he does so and if he’s closely attuned to the elements of his own subjective experience, he’ll be able to recognize in certain natural objects around him elements hitherto not yet discovered but nonetheless eternally present in them. Hence, the objects in nature are recognized to be the source of our spiritual constitution. The content of our non-rational being as much as of our intellectual existence is shown to be determined by the contents of the physical world.”

In other words, the spiritual life is determined by the physical world presented, if you’re attentive to the spiritual world, to the material world around..

Of course, what I am describing (are) the theories that were operating among a lot of the New York artists coming out of  the Ashcan School, William Carlos Williams, the early Imagists, the people hanging around Stieglitz’s art gallery, Alfred Kreymborg (as well as Williams), anthologists and poets of bohemia, of the New York avant-garde of the (19)10’s and (19)20’s – (Stieglitz) had a series of galleries – 291 Madison Avenue, so Gallery 291, followed, finally, by (the) An American Place gallery, that (I)’ve previously) mentioned  – (the title is significant – An American Place)

So, in other words, the kind of poetry we were examining as representative of samatha-vipassana – that is to say, focus, concentration, simplification, mindfulness, realization of present space, non-imposition of fantasy upon the object in space, but clear perception of sight, sound, smell, taste, touch and thought – the preoccupations of this area of meditative consciousness, or meditative experimentation, and the preoccupations of the early (twentieth) century American artists were, surprisingly, amazingly similar, if not identical. They were similar if not identical breakthroughs back to original mind and natural consciousness.

Historically, the American artist had to go through that de-conditioning from European thought forms in order to discover where he was in space around the turn of the century, with the beginning of the Machine Age, and with the beginning of the Space Age. With the beginning of World War I there was this enormous breakthrough to… what?.. we are here in Newark (New Jersey). It isn’t Milan amd it isn’t Florence. It’s Newark (or Hoboken, or Rutherford, New Jersey, in Williams’ case – or mid-Manhattan, 291 Madison Avenue, to be precise, in Stieglitz’s case). So, 291 Gallery – “An American Place”.