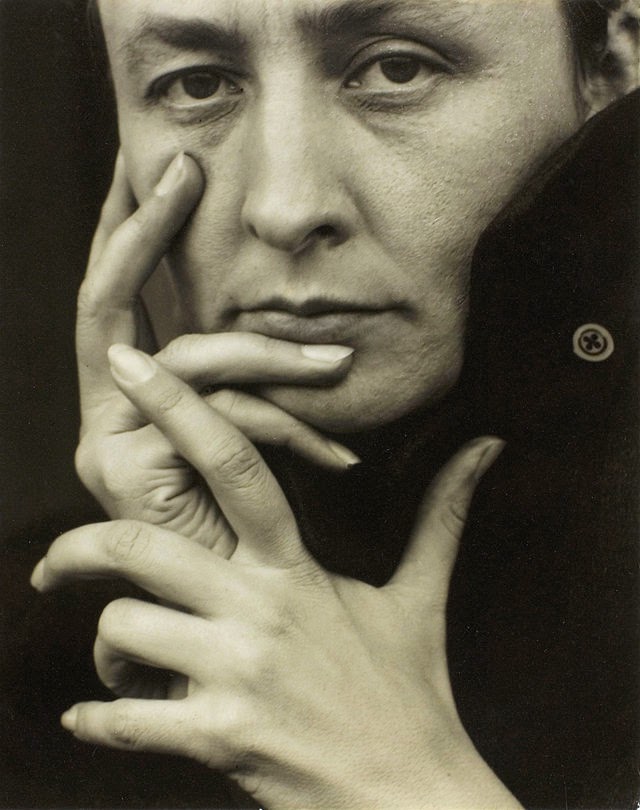 AG: (Who here caught Reginald Ray‘s) presentation on Friday. Can you raise your hands? Raise your hands high. Okay, I won’t go  over it again, though I think he gave a very coherent intellectual outline of stages of Buddhist awareness and penetration of mind. If you can, borrow notes or check it out with some classmates.
At this point, I want to (with a little last look back), wrap up the Samatha–Vipassana–Hinayana area that we’ve been dwelling in so far – the concentration of mind on focused, clear, accurate perception.

Peter (Orlovsky) and I went down to Santa Fe over the weekend, and over the course of that connected with two pioneers in American clarity of mind.  First, we saw Georgia O’Keeffe – went to visit her – she was married to Alfred Stieglitz (and I’d mentioned Alfred Stieglitz, the photographer, whose art scene in New York after the turn of the century was enormously influential on the Imagists and the Objectivists – on (William Carlos) Williams and other poets whose work we’ve been reading).

On the way I studied a little – a book called The Hieroglyphics of New Speech – Cubism, Stieglitz and the Early Poetry of William Carlos Williams – Bram Dijkstra – D-I-J-K-S-T-R-A – which is actually a good historical survey

So, checking through this book, I ran across a few passages which will give you the historical cultural recapitulation of what we’ve been discussing in personal phenomenological terms. Dig? In other words, America went through the same changes around the turn of the century. So, regarding Stieglitz’s idea of photography (Georgia O’Keefe was married to Stieglitz, so she was one of that original group. I’ll get to her painting):

“An unretouched painting is the record of a moment, its image fixed in an instant of time. Stieglitz therefore argued that it is the photographer’s role to seize the moment in terms of its most opportune structure. He must select the single image which will represent the object under his scrutiny most effectively. The photographer therefore, more than any other artist, must be perfectly alert to the materials of the visible world. He is entirely dependent on what exists to the eye. He must see before he can create. He must, before all, in the most literal sense of the world, be a seer.” – he [Dijskstra] said, and then – this is Stieglitz talking now:

“Very early Stieglitz discovered [Dijskstra again] that a photographer must not only be capable of seeing sharply and precisely in order to capture the living moment, but he must be unusually selective as well.”

So, he moved, as Williams did and others, first to an awareness that he’s dealing with a material, visible world (and) that he’s got to see it precisely. But to avoid confusion as to what he’s looking at, he’s got to narrow it down so you see one thing –  one leaf, one rose, or just one scene inter-related.
And it was this selectivity among the sharp, precise images that his wife, Georgia O’Keeffe got to be a specialist in, so that for years she would paint, say, a lily, and for years would paint a cow skull, for years settle, like (the painter Paul) Cezanne, in one area in New Mexico and paint the same mountain over and over….as Cezanne painted Mount Sainte- Victoire over and over again. And also simplifying her image, smoothing everything until it’s just that one shape or form that she was trying to bring out to the eye. Most of you are familiar with her work. It’s been in Life magazine when you were ten!

So that was interesting. First, precision, and then the need for some kind of simplification, or reduction, or selection, so that you actually look carefully at one thing. Just like the.. it’s a similar process of precision about being here in the material world and then simplifying it down to begin the examination just with the breath. Beginning with a breath, like she began with a skull, or a flower, or the red rock canyon behind her home.