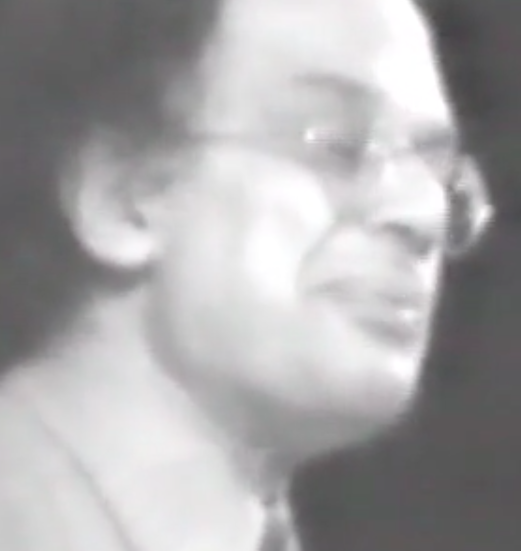 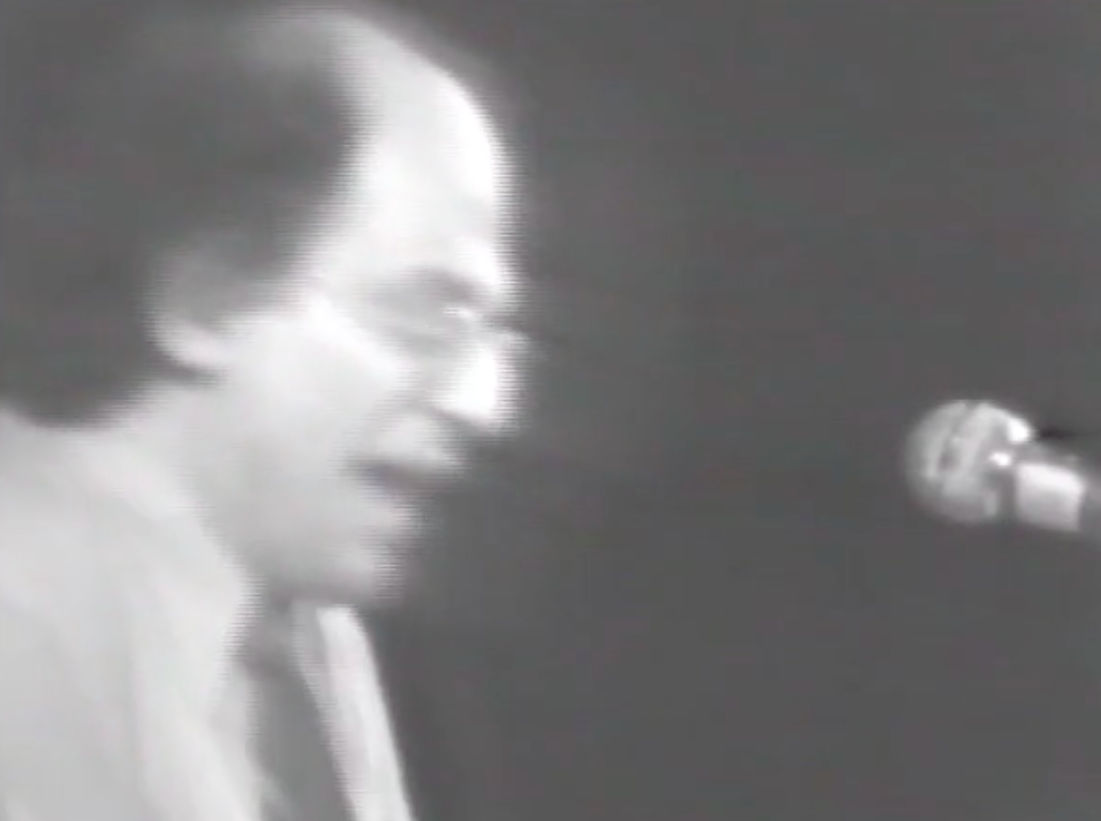 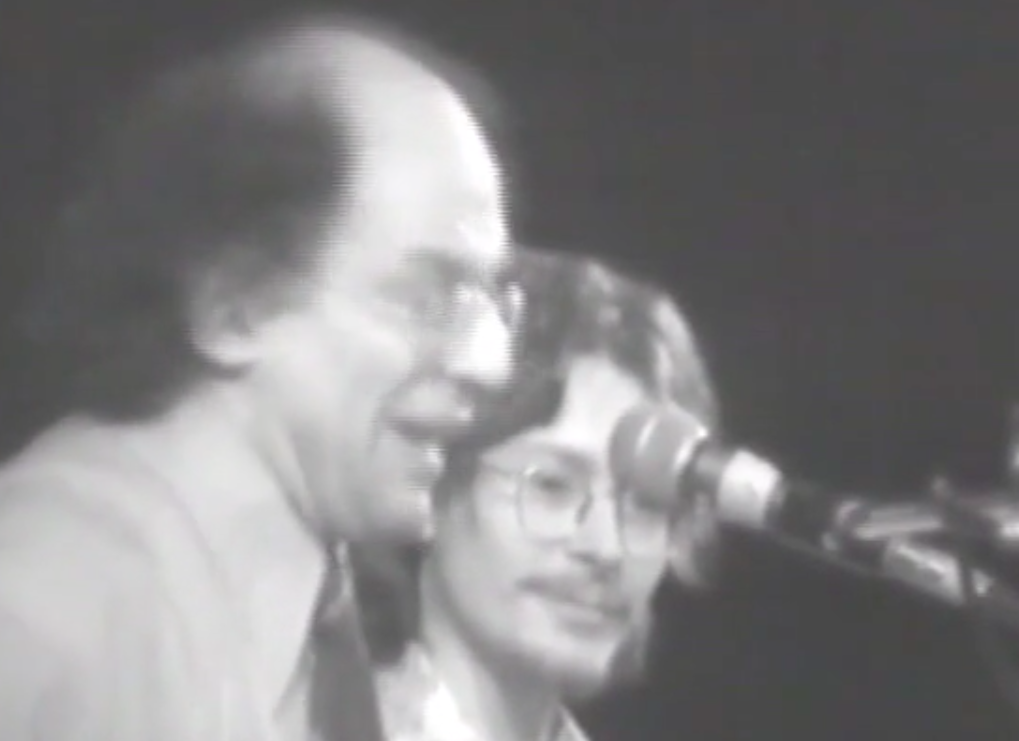 More vintage footage this weekend (courtesy Don Rothenberg)  – Allen Ginsberg (with Steven Taylor) in Toronto, in April 1979, on the occasion of the World Symposium on Humanity event there. The main feature – (following some brief explication) – a reading, in its entirety, by Allen, of his recently-composed “Plutonian Ode”

The footage can be viewed here 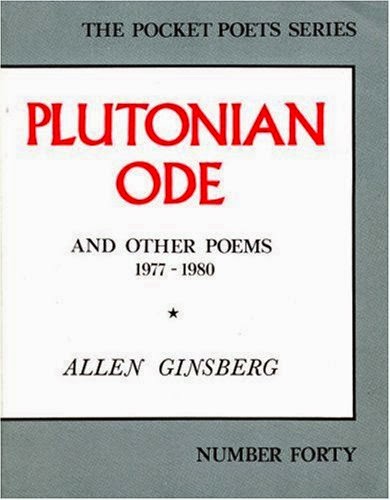 The  tape begins in media res with Steven Taylor on guitar accompanying Allen (on aboriginal songsticks) in a version of “Put Down Your Cigarette Rag“. This is followed, at approximately three-and-three-quarter minutes in, (“for loud voice, oratorical “), by Allen reading “Punk Rock Yr My Big Crybaby”, then, approximately five minutes in, (“in honour of the guru”), “Father Guru”  (“Father Guru  unforlorn/ Heart beat Guru whom I scorn..”)  and,  (“for voice, heart-voice, voice in the center of the body”), “two love poems, or several love poems” – “Love Replied”  (“Love came up to me/& got down on his knee/& said I am here to serve/you what you deserve”) and “Love Returned” (“Love  returned with smiles/three thousand miles/to keep a year’s promise/Anonymous, honest”)

At approximately ten minutes in, Allen introduces a sequence of poems – (“poetry in the voice of ordinary speech”) – ‘My father died several years ago, 1976. These are poems that I wrote as he ws dying, attending him in Paterson, New Jersey. Peter Orlovsky was with me, the poet. So these are from  a series of poems called “Don’t Grow Old”– conversations with my father as he died, of cancer, not in pain particularly, philosophically, but lethargic and weak, without force. (“Wasted arms, feeble knees/eighty years old, hair thin and w hite/cheek bonier than I’d remembered’)

The sequence concludes (at approximately eleven-and-three-quarter minutes in) with “Father Death Blues” )  – “..then my father died and, flying home from Naropa Institute where I was teaching and studying meditation with Chogyam Trungpa, (I)  wrote “Father Death Blues”)

At approximately sixteen-and-a-quarter minutes in, having enquired of the audience about the time, Allen begins his introductory remarks to “Plutonian Ode”

“In the poem “Howl”, I had a section called “Moloch”, pointing to the Urizen-ic, extra-rational solidification of  thought-forms that have created a giant skyscraper mechanical machine teaching instrument (father, boss and uncle) around us) and there is a line in there which is, “Moloch whose fate is a cloud of sexless hydrogen!” In this, relating, I guess, you could say, to the hydrogen bubble of Harrisburg. (Three Mile Island)  This poem was written last summer when I was working with Daniel Ellsberg and the Rocky Flats Truth Force doing sitting meditation at the Rocky Flats Rockwell Corporation Plutonium Bomb Trigger Factory, twelve miles south of Boulder, Colorado, where I was teaching at the Jack Kerouac School of Disembodied Poetics at Naropa Institute under the meditation instruction of Chogyam Trungpa, who, incidentally, will be here in Toronto, actually… [in 1979]. I have some leaflets here.. his meditation is excellent . He will be doing intensive training sessions and a public talk in this hall on Sunday May 27th at eight o’clock (cheap, two bucks), and then there’ll be, from May 28th to June 3rd, intensive training sessions, which involve sitting practice plus evening’s conversation, evening’s talk and instruction – for that entire thing, seventy-five bucks – it takes you a whole day, from May 30th to June 3rd, sitting eight, nine, hours a day, with instruction how to do samatha meditation.. classical vipassana style..from the Vajrayana ..  by the meditation teacher who is one of the inheritors of the whispered transmission of Crazy Wisdom teachings of the Tibetan Book of the Dead [Bardo Thodol], and the Kagyu lineage of Buddhism that goes back to Naropa</a

So from that circumstance, we went and did some sitting meditation on the railroad tracks outside of the Rocky Flats plant, (decided to) sit with the problem, rather than scream at the problem, (I think the problem’s, actually, insoluable), so we’re just going to sit with it – but the night before, I had written this long poem that..(and) a student from the Truth Force came up and said that there was going to be a train coming in bearing missile materials. and did I want to join them and sit? And so the morning after writing this. I wound up getting arrested for (sitting on the) railroad tracks 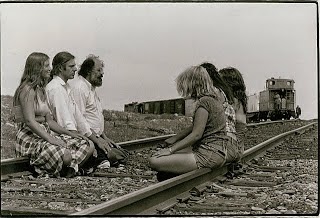 Then there are some footnotes to the poem but I think I’ll just go through without footnotes, except to.. to tell you.. that the twenty-four-thousand year period, the Great Year, is also, precisely, the twenty-four-thousand year half-life of plutonium, a new element created by Man..(named after the planet Pluto, I think – what is it ? there’s, Neptune, Uranus, and Pluto – the order of the planets,  Neptune’s ocean, Pluto, Hades..) – Pluto was the father of the Eumenides that come back and punish you if you do mindless things, so that Pluto is the father of this karmic cause-and-effect feedback. So, he had stolen Earth-Mother’s daughter Persephone and taken her down to Hades to throw her in the salt mines for thousands of years, and then Persephone got some Spring time..
His mother-in-law was Demeter, Earth goddess, and she was worshipped at the temple of  Eleusis (and that was the only temple in the ancient world where Hades was.. worshipped with the sacrificing of sheep..rack of lamb..throats cut and pouring of honey and water on the floor (as the) libation to Pluto. The cities I name are the cities where we have plutonium plants, where they fabricate plutonium, where they make it, where they fabricate it to three-pound  bomb triggers. Each bomb trigger has the intensive explosive force of a Nagasaki bomb and that sets off an explosion ten thousand times larger than that.. We have thirty-thousand such bombs in our possession,  in our arsenal, the Russians have twenty-thousand such bombs now – so it’s hopeless, don’t figure we can get out of that one!  The age of the earth is supposed to be four billion years and every year…

I mention in it Jehova.. Ialdabaoth, Iao, Elohim. Jehova.. those are the Aeons or Archons of the Aeons, sprung from Sophia‘s Imagination (Sophia, being the first word for Wisdom, or first reflections in the Abyss of Light, which would correspond to the Buddhist sunyata, I suppose, the dharmakaya –  the Abyss of Light, an old Gnostic notion – There was a reflection and it was Sophia (Wisdom) and she had a reflection that was Ialdabaoth and then he had a reflection that was Iao – and his thought was the Aeon Elohim and his thought was the Aeon in Jehova – Sophie saw that these egocentric Gods were imprisoning sparks of light in the Garden of Eden, and so she sent the call or the great call, the Messenger, the Serpent, to tell them to eat that Apple of Knowledge, so they’d realize that Jehova was a thought of a thought of a thought, was only a reflection, an Abyss of Light..

There are three hundred tons of plutonium around now. Estimated world military budget [1978] is five hundred billion, US share was one hundred and sixty billion dollars.

(The) four (sic) characteristics of Buddha activity are – to pacify, to enrich, to magnetize (bring and collect together) and then destroy what needs destruction.  And the poem ends with an American-ese approximation  of the Prajnaparamita mantra, the Highest Perfect Wisdom mantra – “gate gate paragate parasamgate, bodhi svaha” ( “Gone gone – all gone to the other shore gone – Wakened mind salutations”) – so Ah! – like Amen – (in Sanskrit, svaha – salutation – in Tibetan – soha – in Japanese – sowaka – so it ends “…so Ah!” , the poem.”