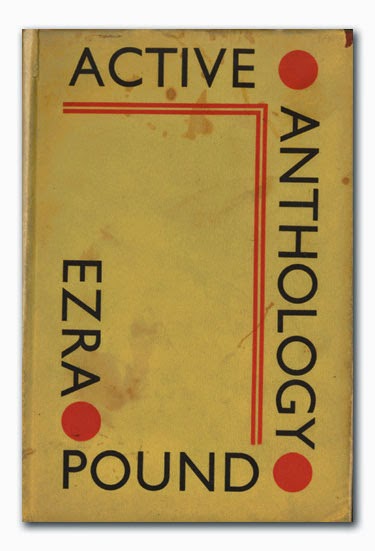 AG: I was, I think, mentioning (Ezra) Pound‘s distinction between presentation and reference.  [to Students] Did I do that here with you?

AG: Okay. Pound was saying (that) if you want to present your image do it as directly as possible. You present the details, you present the minute particulars, you don’t just refer to them. Like, not “lady” walking down the street”, but “middle-aged lady with a large flower-hat and a purple dress” walking down the street. That is, you present her a little bit, you present a little bit of the detail. You don’t settle for a total abstraction. You remember what you saw and present it. With the poets I’ve been working through individually I’ve gone through this so often that I get confused whether I’ve done it in class..

But.. so.. (William Carlos) Williams’  “parsley-/ crisped green” is presented. He doesn’t say there was “a vegetable” in the kitchen. He says that there was a water-glass filled with “parsley-/ crisped green” on the grooved draining-board. He doesn’t say “In the house there was some green vegetables”. He actually delineates it. He delineates it in sufficient detail so it gives you a mind’s eye picture. So that’s presenting.
Reference would be not presenting it but just saying that there was a vegetable in there.Or, “I came down and I saw the vegetables, and then my mind went off to the ballet, and then I came down and saw the vegetables again”. So he actually presented the “crisped green” parsley. So that’s presentation.

When I first sent my own poems to Williams (a book called Empty Mirror,  or poems from Empty Mirror), he said, “These are good” and “This is it” and “Have you got any more like this?”. And then (for) a couple of poems, he said, “However, a couple of these are long. You can’t tell the active material from the inert. And it’s better to have one active phrase or one active line than pages of inert, inactive material”. And by “active”, I interpreted him to mean (“(parsley-/) crisped green”) – presented.

And I thought that word – “activist” – like The Active Anthology – has to do with that. active language – that is to say, language that actually does present a picture in the mind’s eye that’s clear enough to see with the mind’s eye.