Audio: March 21 1974 at SFSU (San Francisco State University – Charles Reznikoff reads a selection of his poetry (introduced by George Oppen) – in front of “a whole crowd of poets in San Francisco who knew something”

AG: (So)  (Charles) Reznikoff starting down into the subway (on page 110, Volume 1)
– (15) “In the street I have just left/the small leaves of the trees along the gutter/were steadfast/ in the blue heavens./Now the subway/express/picks up speed/and a wind/blows through the car/blows dust/on the passengers/and along the floor/bits of paper-/ wrappers of candy,/of gum,/tinfoil/pieces of newspaper…” – (Well, it was just a little something he noticed – “bits of paper-/ wrappers of candy,/of gum,/tinfoil/pieces of newspaper…” It could have gone  on into some big rhapsody but he realized that was about all he saw, so he cut it off and put three dots there (which reminds me of what (William Carlos) Williams said, which I repeated – bettter to have just one active phrase, or some active language, or some active perception, than try and build a lot of bullshit on it. I mean,  there’s no need to write a big long poem. You just had that one glimpse, then leave it there. Don’t cling to it. You don’t have to develop it any further. It’s there, self-existent, unborn, undevelopable, just hanging there in the air).

Student: Did Reznikoff try to publish before (that New Directions book)?

AG: Yes, he published his own work. And New Directions published.. I’ve forgotten when, but look at the New Direction book(s). Well, actually, in this, there’s Rhythms 1918, which he published himself, Rhythms 1919, self-published, Poems 1920, Uriel Accosta, 1922 -(Plays), all done by himself. Then probably something done by the Objectivist Press (I mentioned it yesterday) in the (19)30’s.

AG: Yes. Samuel Roth. Then By The Waters of Manhattan – Selected Verse, 1962 -that’s the date of the New Directions book, I guess

Student: Was he very well known during his time? 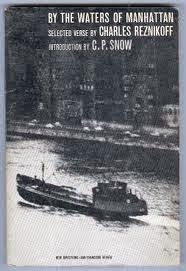 AG: No, totally unknown. Poets knew him. Ezra Pound read every book he ever wrote. Basil Bunting knew him. Louis Zukofsky knew him. These are the Objectivists. George Oppen knew him. Carl Rakosi knew him. Robert Duncan knew him. I didn’t know him very well until, I’d say, about 1970, (19)65-(19)70.  I went to see Ezra Pound in 1965 and asked him what he read, and, apparently, he was doing the I Ching, and the only time I got a rise out of him, I said, “Did you see Basil Bunting‘s new book?”, and he wouldn’t talk but gave a big head-shake (he was really alert to that, and he would be alert to Bunting and he would be alert to Zukofsky and he’d be alert to Reznikoff and a few other poets, Williams, anything they’d put out – his old friends, naturally).

Reznikoff was hadly known. Anne Waldman and the New York St Marks Poetry Project used to invite him to read and he’d give readings. I gave a reading there and the church would be full, Reznikoff would give a reading and maybe they’d be thirty people, twenty people, me and Peter (Orlovsky) and fifteen other people. Ron Padgett. He’d read this stuff that was so pure that we’d weep, and there was nobody there. This old man, this seventy-eight-year-old man. Very humble. Reading it, like he had these old poems, that he took out, and very carefully marked, which ones he was going to read, and worried whether people would listen to him, and was he talking loud enough?, and not wanting to bore anybody

AG: When was that?

Student: It was very well attended. A huge crowd and he.

AG: A whole crowd of poets in San Francisco that knew something.