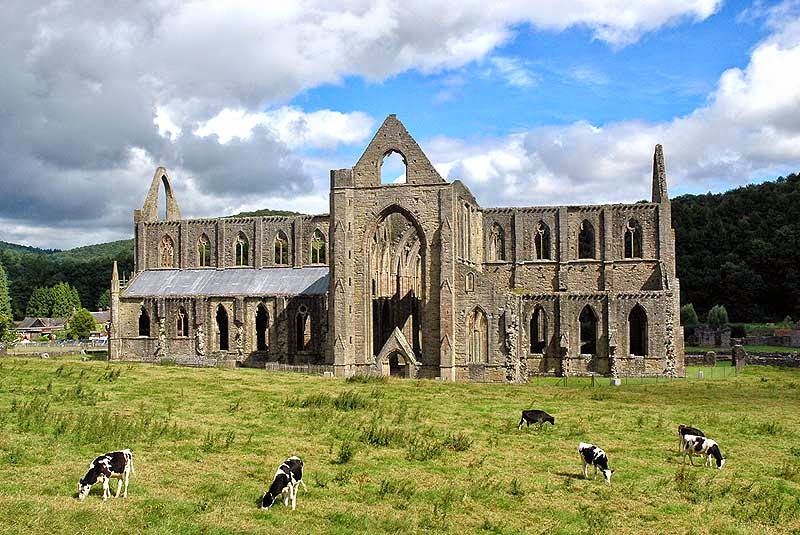 [Poetry and Meditation – Allen Ginsberg (from the Summer of 1978, lecturing at Naropa (then Institute, now University) continues:]

(William Wordsworth). (That’s) a little earlier than Percy Bysshe Shelley. William Wordsworth’s “Lines  Composed A Few Miles Above Tintern Abbey On Revisiting the Banks of the (River) Wye During a Tour, July 13, 1798” – that’s, I guess, when Shelley was a kid. (William) Blake was just publishing “Songs of Innocence” (not “..Experience”). Wordsworth was a mature poet (who was) already practicing, already gone down into his art, already into his own practice, already looking back a little, in fact. He had visited this place, I think, before with his sister – [Allen proceeds to read, in its entirety, Wordsworth’s “..Tintern Abbey”] – “Five years have passed, five summers,  with the length/Of five long winters; and again I hear/These waters, rolling from their mountain-springs…”…”That after many wanderings, many years/Of absence these steep woods and lofty cliffs,/ And this green pastoral landscape were to me/More dear both for themselves and for thy sake!”

So, in the beginning he’s talking basically about, again, ordinary mind and the qualities of ordinary mind and calming the passions, but the really remarkable thing is that, at the very beginning, the sketching of the external universe, or the external world (actually, the pastoral world) is so exact it’s almost uncanny. There are a couple of phrases in here that have stuck in people’s minds as really workable descriptions of wild nature – like “These hedgerows, hardly hedgerows, little lines/Of sportive wood run wild” – like a fast sketch, it’s almost like, you know, a fast Van Gogh brushstroke to get that line. – “Of sportive wood run wild”

And then, “these pastoral farms/Green to the very door” – which, I think, is one of the greatest lines in English -Green to the very door” (on account of it means that those people who have lived there so long and are so much aware of the landscaping and their own door and their own pasture, and so delicately protective of it, so dignified with it, that, actually, they haven’t messed it up. As you can find it in Wales (sic) and other places in England, the field comes “to the very door” and is “(g)reen to the very door”. You walk on a carpet of green, perfectly cut and cultivated, grass. Grass is cultivated for centuries right up to the very stone, the lintel of the door, or the step – “Green to the very door” – With that one phrase, you have a whole mind, a whole society, a whole social existence,  a whole relationship with nature projected. That always struck me as being in Wordsworth one of the sharpest pieces of eyeball noticing ever written down (either by Wordsworth or anyone). I would say Vipassana there – insight into sort of luminous fact, or a luminous insight  into a luminous fact, or clear insight into a luminous fact that is so factual that it goes beyond itself and actually tells you the whole story of the whole society. There are, actually, in this town, (Boulder, Colorado) a few lawns that are “green to the very door”. I check them out, whenever…. It’s like “water freshening”, you can tell how much attention is actually paid to lawn and human habitation and door-sill, if you  check out that how stomped with mud is the approach to the door. Or, it takes a special pastoral aesthetic to want that “green to the very door”. You can walk out bare-foot..

With Wordsworth, however, it  does lead.. where the quietness and attention comes from when he begins to describe it, it, finally, again, does come, as with Shelley, back to the breath (or the word “spirit”, used almost interchangeably with “breath”, and almost like a quietening of breath, or (see, as he’s talking here), almost a suspension of breath) – “that serene and blessed mood,/in which the affections gently lead us on – /Until the breath of this corporeal frame/And even the motion of our human blood/Almost suspended..” – “Almost suspended” – Well, that’s an experience that we’ve all had. Particularly (with) sitting. Not that you stop. It’s just that the breath becomes even and the calm becomes so clear and unruffled, there’s that suspension of mental activity.”

[Audio for the above can be heard here, beginning at the start of the tape and concluding at approximately fifteen minutes in]