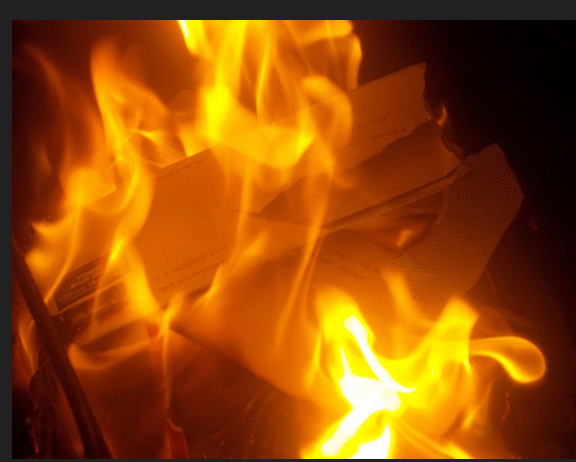 Our transcription of Allen Ginsberg on Charles Reznikoff  (from 1978) continues

(12)  The house was pitch-dark./ He entered his room. Books and papers were heaped over the/floor./He stuck a candle in a corner, and on his knees began to go through the papers./He must finish that night: the next night the others would move in./ Yes, here was the bold handwriting, the bundle of letters tied together,/ He took these into the kitchen. He did not need a light:/ he ought to know the way, had walked it so often./ He crammed all into the stove and lit a match./The fire ran over the surface and died out..” – (That’s all a pretty good piece of observation – “The fire ran over the surface and died out”) – “He tore the letters into bits and lit match after match” – (That’s also good –  it’s so real) – “until nothing was left but brown pieces with black, crumbled edges.As the papers twisted and opened, tormented by fire,/Darling had stood out in the writing against the flame/ for a moment before the ink was grey on black ash that fell apart./ Here was the bedroom where she had been sick./Her teeth fell out; before the end her nose rotted off./ He uncovered a bunch of dried flowers and white gauze -/ her bridal veil and bouquet left in the rubbish./He went back to the kichen stove. The gauze flew up in a great flame, but the flowers remained – blackened stalks./ Now he was through. He closed door after door softly behind him.”

What other poet is so interested in reality? I don’t know any other poet who’s so interested in what actually happened as Reznikoff. (William Carlos) Williams is interested in it, in certain fragments of what happened, but Reznikoff has a funny kind of beginning of an empathy, appreciating the nose rotting off in a way that very few people are able to include as part of their poetic mentality.