AG: Did I read any (Charles)  Reznikoff yet? 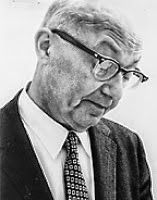 AG: Here. Okay. so on page 14 – “(7) – On Brooklyn Bridge I saw a man drop dead/It meant no more than if he were a sparrow./ Above us rose Manhattan/below, the river spread to meet sea and sky”

These are a series of little sketches, mostly the city. He hung around New York City, working as a legal researcher

This is page 17:
(19) –  “My work done, I lean on the window-sill/watching the dripping trees./The rain is over, the wet pavement shines,/From the bare twigs/rows of drops like shining buds are hanging”
– That’s a very clear picture, almost like a photograph almost, in this case.

Student: (I thought of the early ones (of Ezra Pound‘s))

AG: Yes. (Ezra) Pound was, at the time, dealing with that.

Student: And Reznikoff too?