Meditation and Poetics – (Make It New) 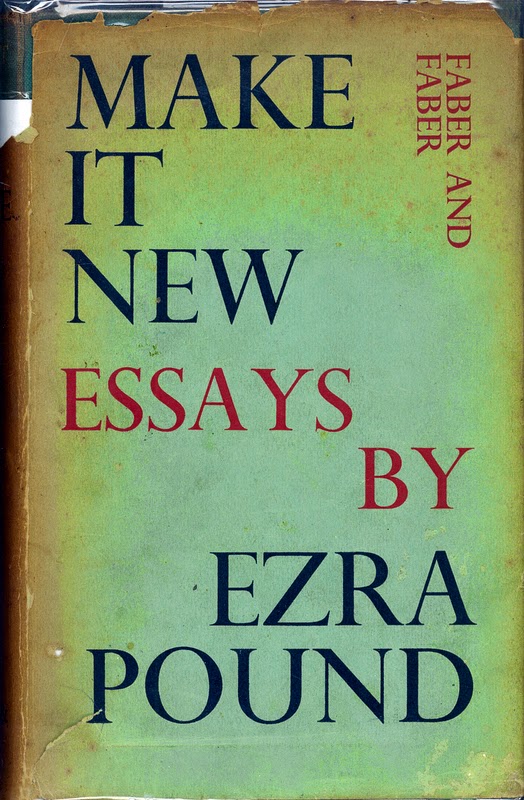 Our serialization of Allen’s 1978 Naropa Institute lecture series, Meditation and Poetics continues with this class from July 24 1978

AG: So, heroic days, the (19)20’s and (19)30’s, with heroic figures making movements which are based on real philosophic ideas, which were themselves based on new notions of sense perception, sharpening and focusing of sense perception. Oddly enough, in the twentieth-century, there was this breakthrough . Maybe because everything was so confusing, so relative, the Industrial Revolution had gone so far and everything began changing so much that there was no intellectual standard, no God to appeal to anymore, nor any State to appeal to, nor any dignity to appeal to (especially after World War I), no stable social environment to rely on, no family ((the family structure) breaking up with all modern transportation and communication). So finally, people began saying, “What’s going on? What is the reference point? What is the standard?” So finally they had to… Especially in America, where everyone had to invent their own culture, especially after (Walt) Whitman. European culture (was) kind of worn out, and there was this new American industrial scene, with no previous history, just stuck there on a new continent, with the original natives killed off and a bunch of European people melted together in a melting pot, with strands of different cultures, but all of them contradictory, like old Jews in fur hats and old Spanish ladies with rosaries and (Greenwich) Village atheists cursing everybody. So what do you have to rely on?

So what you’ve got to rely on, finally, is what’s close to the nose, some pragmatic William James matter of what-you-can-actually-see-yourself? What can you contact with your eyes, nose, tongue, skin, ear and mind?

So the Imagists’ and Objectivists‘ poetic practice rose out of that chaos, actually, as people began to define their universe through what they could perceive themselves directly,without recourse to large abstractions that had been handed down before. Particularly, abstractions of God and country. You see, God was exploded, country was exploded, by World War I. God was exploded by World War I or World War II, in a way. Everybody got the idea that there ain’t no just God around, it’s just a lot of implacable atoms floating in space.  So.. Finally, people, actually, had to make it all up by themselves. And that was (William Carlos) Williams‘ whole point too – that he had to make up his prosody, his language, his perceptions, his whole poetic world, by himself, with no help, no recourse to any previous tradition. It all had to be done, (be) composed, out of the raw materials of the speech he heard around him and out of the direct perceptions he had with his own senses.

Now this fitted in with earlier American philosophies, like William James’ pragmatic studies. It was actually a kind of pragmatism – an abandonment of everything known and a testing of senses and direct contact. It got to be that later Charles Olson would theorize that history is just what we know, it’s our gossip. The only real true history is like Herodotus or our own gossip. (Herodotus wrote a lot of gossip down, but at least it was what he heard directly from other people not what he read in books. So it was all a human universe, with direct personal contact, and had a kind of emotional reality, and probably (just) as much accuracy as any scholarly text)

So Olson was seeing that history is, well, our own behavior, in a sense, our own behavior and what we know of our friends’ behavior. And, in a way, you get that in Frank O’Hara too, in his poetry – history (or poetic history) is just what he had for lunch (it’s the only thing you can know, and it’s the most romantic thing – the most important thing in the world is what did you have for lunch, because, at least that was real, it wasn’t like the.. (President, Jimmy) Carter refusing to go on with the reduction of atomic armaments on account of he’s mad at what the Russians are doing to [Soviet dissident] Alexei Ginzburg< (a piece of jerry-built logic – that’s all irrational anyway – that particular newspaper history is completely empty and irrational). So what Frank O’Hara had for lunch is, actually, a solid fact that you could rely on, as a piece of history.