“Baby-faced Allen Ginsberg revealed” is the headline. At the end of last year, staff archivist Steve Cooney went looking through the voluminous archives of the San Francisco Chronicle and came up with this shot (see above) from a series of photo-negatives that had been maintained but had never actually run in the paper – “I struck gold”, he declared. “The contrast between the cleanshaven Ginsberg with a full head of hair quite conservative in length and his more familiar rabbinical hippie image shined a light on the changes in social mores that the Beat Generation helped to ignite.”

The “more familiar rabbinical hippie image”?- something like this, perhaps? 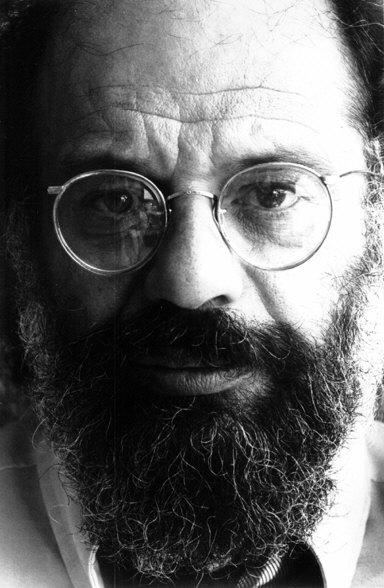 Ginsberg on Blake. We’ve drawn attention, on numerous occasions, to the remarkable 1969-70 MGM recordings. Our good friends at Open Culture recently did the same to those materials – here

and Ginsberg-on-the-web – Ginsberg on Whitman – Allen’s essay, “Taking A Walk Through Leaves of Grass“ (that was originally published in 1991 in The Teachers and Writers Guide to Walt Whitman) was recently re-published on the Academy for American Poets site

Caught in a somewhat noisy Wisconsin diner [2019 update this video is no longer available], Ginsberg biographer Michael Schumacher holds forth with some book news (he also speaks of his memories of waking up in New York City in Allen’s apartment next to a  larger-than-life David Cronenberg mugwump, and some recollected Allen Ginsberg-William Burroughs banter over Allen’s depiction in Cronenberg’s filmed version of  Burroughs’ Naked Lunch) 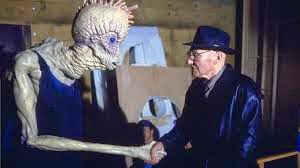 “I’ve just finished editing a “greatest hits” collection, so to speak, the best of his poetry, the best of his essays, interviews, just about everything, even his photographs, and it was a great project, I was happy to do it, and it’ll be out by his publisher,HarperCollins here pretty soon, a couple of months [The Essential Ginsberg– a brand new trade paperback, will be published by HarperCollins under their Harper Perennial imprint, publication date has been announced as May 25]