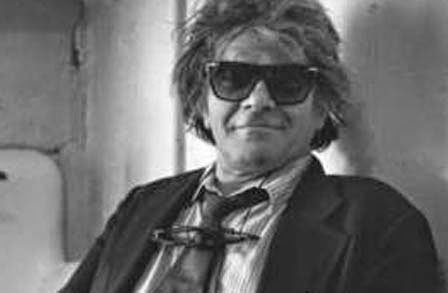 An addenda to our yesterday’s Gregory Corso posting. We didn’t quite finish the transcription. Here’s Gregory’s account of his prison background and his reading  and commentary on the final poem of the evening –  “Feelings on Getting Older“

Did you ask me what I did? That’s a question people always ask, what I did?

Alright, there was this three [sic] year-old girl and I had the hots for her, so I got her in this room (beer cans all over the room, right?) and I fucked her in the ass – right? – are you learning? – We’re human-beings too. What do you think a man like me would do? – to get anything. No no no no no, oh, no no no no (that story’s (obviously) untrue). They put me (in) for three years for doing a sharp shot. World War II was over, Army & Navy stores were selling walkie-talkies – bam bam bam – I have no home, I’m all alone, I meet two Irish guys and I say, “hey, let’s get these walkie-talkies. One guy would be in a car, saying “No cops are coming”, one would be on a stairway to relate it to the guy breaking the file safe of  household finance (the fuckers who lend out money!) and I got twenty-six thou (and that was 1946!)
I was sixteen years old, I was still dumb. I gave them my name, these kids, Never do that!  When you’re committing a crime never give your name. That was my dumb shot.

So look how I was saved – I was saved this way. I went down to Florida with my share of the twenty-six thou. I bought zoot suits (with winged tips…). The other two guys are Irish. They open up a big hall at Ninety-ninth Street and Lexington Avenue and invite the whole neighborhood in! – So, the cops say, “Well, boy, where did you get the fuckin’ money, man?”, you know, and they asked some questions. And, of course, they knew my name (but there was the fourth guy, they didn’t know his name, and, blessed be, I didn’t know his name). They beat the shit out of me, the cops, man (but the other kids gave my name, they’re spared). Now I’ve got to give the name of the other. The worst thing that you can do on this planet is to fink (on someone).  (Then) life is over. So I was blessed. I didn’t give the name (because I didn’t know it!). I played the game (I don’t know how I would have been if I knew it, but I was raised Italian and you don’t tell on others, ok?). So I had three years, from seventeen to nineteen years old, in the school of hard knocks (where people were going  to the electric chair and all that shit), and, boy, did I learn!

Three things were laid on me..

Dannemora, Plattsburgh – dig the game – three things were laid on me (I was a very good-looking young Italian boy, seventeen years old).
First thing they tell me was “don’t take your shoes off”. You’re walking right out,right? Three years don’t mean shit.
Second thing – “don’t you serve time, let time serve you” – I read all the books, I ate up all the dictionaries. I got it. I got the fucker. See? – but I also had this, see, see? – I had the spirit. And I learned in that three years, and also, you know what I learned? – how to ski!

Dig the game  – you’ve got the field down there and then you’ve got courts where the mafiosos cook their foods from outside..(they buy their own food). In winter time the snow is getting into it. So I worked on the..gangs to keep helping, and all that, so you built the ski-track…and they rent.. – they got the skis (or buy it (them) from Sears Roebucks)

So I took my first shot. Do you know how I did it? They’re waiting in line, all going to eat (it must have been about five-thirty), I went and I went like this…   I learned to ski in prison.

I want to see how you feel about this poem that I’ll end with tonight, alright? This is the one I don’t know about. Help me out with it, because I can probably check this fucker out, it’s a good one. It’s coming aware of what they call “the age of crisis”. I got a lot of kid in me, right? I know it. I got a lot of kid in me, (makes you want to carry it around, right, like an albatross, or some shit). How do you use… So, here it goes:

“Feelings on Getting Older” – “When I was young/I knew/but one Pope/one President/one Emperor of Japan/When I was young nobody ever grew old/ or died/The movie I saw when I was ten/is an old movie now/and all its stars/are stars no more/ It’s happening… As I age/the celebrated unchanging faces of yesterday/are changing drastically/Popes and Presidents come and go/Rock stars too/So suddenly have matinee idols grown old/And those starlets/now grandmothering starlets/And as long as I live/movie-stars keep on dying./ What to stem the tide?/Cease reading newspapers?/Cease myself?/ Yes, when I was young/the old always seemed old/as though they were born that way/and the likes of Clark Gable, Vivien Leigh/ seemed forever/Yes, now that I’m older/the old of my youth are dead/and the young of my youth are old/ Wasn’t long ago/in the company of peers/ poets and convicts/I was the youngest for years” – (Yeah, when I went to Dannemora  (seventeen, left nineteen, I entered the youngest guy and I left the youngest guy – alright..)- “Wasn’t long ago/in the company of peers/ poets and convicts/I was the youngest for years/I entered prison the youngest and I left the youngest/Of Ginsberg, Kerouac and Burroughs… the youngest/And I was young when I began to be the oldest/At Harvard, a twenty-three-year-old amongst twenty-year-olds/ Alive, Kerouac was older than me/Now I’m a year older than he/and fifteen years older than Christ/ In the Catholic sense/ I am fifteen years older than God/ and getting older” – [Well, I had to play that one, alright?, had to play that shot, alright?] – “Women…” – (aw, this is so nice on the women) – “Women… the women of my youth!/ To think that once I wanted to give undying/ love to the beauty &  form of a lady of forty in nineteen fifty /I beheld her recently she, in her seventies/in a long black dress/her once magnificent ass/ all sunken flat!/How cruel the ephemera of fleshed proportion!/Poor Marilyn Monroe! /No mortal goddess, she/The mortal goddess/ is but a hairy bag of water/ – and so are we all/And stone goddesses even with all their amputations/maintain beauty in their ruin/ Strange too:/ When I was twenty my father was forty/and he looked & behaved like he did/ when I was five and he was twenty-five/And now that in two years I’ll be fifty/a half-century old!/and he, seventy/it’s me not him/ always getting & looking older/Yes, the old, if they live, remain old/but the young, never remain/…they’re the stuff what becomes old/ No, I don’t know what it’s like to be old… yet/I’ve a wife in her early twenties/ and I’ve a son just two-and-a-half/In twenty years, I’ll be seventy, she’ll be in her early forties/and he in his early twenties/And it’ll be in the year two thousand!/and everybody will celebrate & drink & love and have fun/while me poor me/ will be even more toothless/ and bony-assed/and inevitably stained with pee/ And yet, yet shall planes crash/Popes, matinee idols, Presidents, yet shall they die/And somehow with all this oldingness/I see with vintage eyes, Life: Spiritus eterne!/With all the comings come/ and the goings gone”.