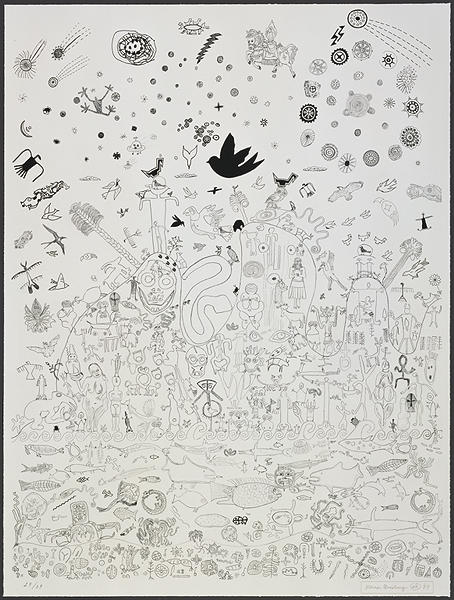 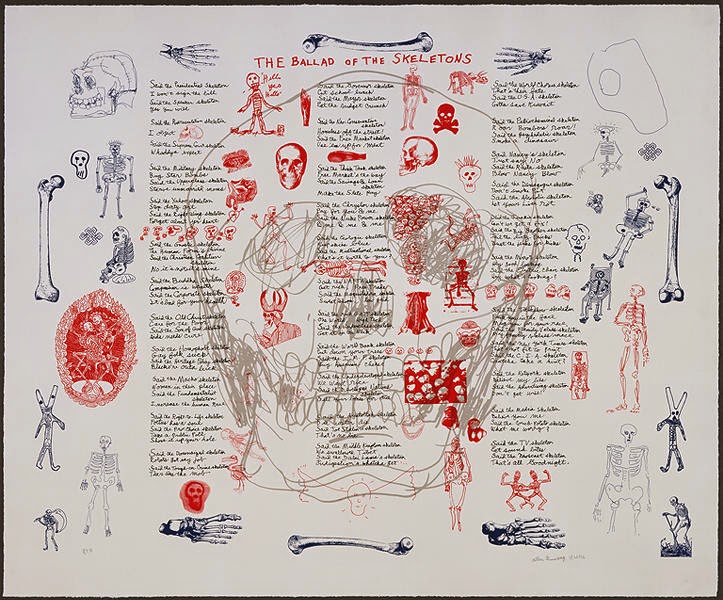 from an interview with Steve Silberman, 1996

..And (then)  a series of lithographs I did at the Gemini G.E.L – a great, very elegant printing establishment in Los Angeles. I was there in residence for about a month-and-a-half this year, and produced six images which they’ll make into a portfolio. One of them was an illustrated “Ballad of the Skeletons,” which they made a special edition of 100. They cost $1,500 each, on this really good paper, with a signed edition and what not. So those are out, and there are five other images.

from an interview with William Turner

WT: You have just completed six prints for Gemini G.E.L. I don’t recall having seen any graphic work before. Is this a new endeavor for you?
AG: I have done prints twice before. A portfolio with Nam June Paik, John Cage and two others, a portfolio to raise money for Nam June Paik’s world broadcast of 1984 (“Good Morning, Mr Orwell’), and I did another through Nam June again, just one, with many artists. Nam June introduced to someone in Paris who liked my little Buddha sketches, so I did one.

Here I began getting a little more technical with collage, etc. The next thing I might do would be to make a photo-collage, like (Robert) Rauschenberg‘s, using my own photos [Editorial note – sadly, never completed]. Maybe making a big assemblage of everybody connected and semi-connected with the various generations of the Beat Generation, using my own photos, collaging them together. I’ve seen a lot of assemblages like that, though usually they’ve got a lot of bad poets and they’re not accurate.

Sid (Sidney Felsen, director of Gemini) mentioned that he had been making some prints with Rauschenberg now composed only of photographs. I’ve done some collages before  but always overly orderly things with (William S) Burroughs popping up large.
WT: You obviously love to draw as well, and were intensely focused on your printmaking at Gemini, is another artistic career blossoming?
AG: I like writing better. It got a bit much between photography and music and operas and rock n’ roll, (but) it’s like a vacation. I can do it and not have to be around New York.

“The Ballad of the Skeletons”, it should be pointed out, represents not only a triumph by Allen Ginsberg but a triumph of collaboration. As Ruth Fine in  the National Gallery’sCatalogue Raisonné has noted – “”The Ballad of the Skeletons” represents a complex and multifaceted world through a presentation of interwoven text and image. The handwritten poem gathers many polar viewpoints and is illustrate with an aggregate of drawings contributed by nine artists representing many different styles. This collective spirit, celebrating art as the product of multiple imaginations, viewpoints and sensibilities revealed in the same entity, ehoes the spirit and substance of the Gemini workshop.”
Contributers to “The Ballad of the Skeletons” include George Condo, Julian Schnabel, Hiro Yamagata,Wim Wenders, David Hockney, Ed Ruscha, John Giorno,Steven Taylor and Raymond Foye.