The Lion For Real – (Three Renditions) 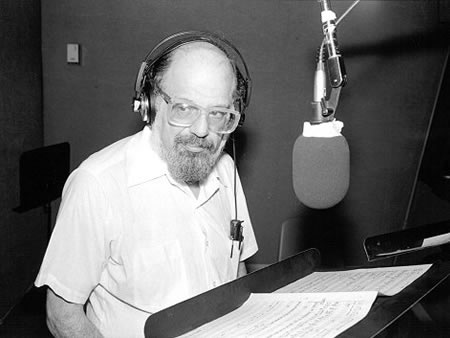 The Lion For Real

I came home and found a lion in my living room
Rushed out on the fire escape screaming Lion! Lion!
Two stenographers pulled their brunnette hair and banged the window shutI hurried home to Patterson and stayed two daysCalled up old Reichian analystwho’d kicked me out of therapy for smoking marijuana‘It’s happened’ I panted ‘There’s a Lion in my living room’‘I’m afraid any discussion would have no value’ he hung upI went to my old boyfriend we got drunk with his girlfriendI kissed him and announced I had a lion with a mad gleam in my eyeWe wound up fighting on the floor I bit his eyebrow he kicked me outI ended up masturbating in his jeep parked in the street moaning ‘Lion.’Found Joey my novelist friend and roared at him ‘Lion!’He looked at me interested and read me his spontaneous ignu high poetriesI listened for lions all I heard was Elephant Tiglon Hippogriff UnicornAntsBut figured he really understood me when we made it in Ignaz Wisdom’sbathroom.But next day he sent me a leaf from his Smoky Mountain retreat‘I love you little Bo-Bo with your delicate golden lionsBut there being no Self and No Bars therefore the Zoo of your dear Fatherhath no lionYou said your mother was mad don’t expect me to produce the Monster foryour Bridegroom.’Confused dazed and exalted bethought me of real lion starved in his stinkin HarlemOpened the door the room was filled with the bomb blast of his angerHe roaring hungrily at the plaster walls but nobody could hear outsidethru the windowMy eye caught the edge of the red neighbor apartment building standing indeafening stillnessWe gazed at each other his implacable yellow eye in the red halo of furWaxed rhuemy on my own but he stopped roaring and bared a fanggreeting.I turned my back and cooked broccoli for supper on an iron gas stoveboilt water and took a hot bath in the old tup under the sink board.He didn’t eat me, tho I regretted him starving in my presence.Next week he wasted away a sick rug full of bones wheaten hair falling outenraged and reddening eye as he lay aching huge hairy head on his pawsby the egg-crate bookcase filled up with thin volumes of Plato, & Buddha.Sat by his side every night averting my eyes from his hungry motheatenfacestopped eating myself he got weaker and roared at night while I hadnightmaresEaten by lion in bookstore on Cosmic Campus, a lion myself starved byProfessor Kandisky, dying in a lion’s flophouse circus,I woke up mornings the lion still added dying on the floor–‘TerriblePresence!’I cried’Eat me or die!’It got up that afternoon–walked to the door with its paw on the south wall tosteady its trembling bodyLet out a soul-rending creak from the bottomless roof of his mouththundering from my floor to heaven heavier than a volcano at night inMexicoPushed the door open and said in a gravelly voice “Not this time Baby–but I will be back again.”Lion that eats my mind now for a decade knowing only your hungerNot the bliss of your satisfaction O roar of the universe how am I chosenIn this life I have heard your promise I am ready to die I have servedYour starved and ancient Presence O Lord I wait in my room at your
Mercy

Eric Drooker – illustration of “The Lion For Real” from “Illuminated Poems”

A few months before, Allen had read the poem at Columbia, his alma mater, dedicating the poem to his old professor, Lionel Trilling. This was the occasion that produced the derisive (and misguided)  contemporaneous report by Trilling’s wife, Diana, “The Other Night At Columbia: A Report from the Academy”, published in the Spring 1959 issue of the Partisan Review –

From that notorious essay – “Clearly I am no judge of his poem “Lion in the Room”[sic], which he announced was dedicated to Lionel Trilling; I heard it through too much sympathy and also self-consciousness. The poem was addressed as well as dedicated to Lionel; it was about a lion in the room with the poet, a lion that was hungry but refused to eat him; I heard it as a passionate love poem…”

She, of course, heard it wrong. As Allen explained (in a May 12, 1959 letter to his father),     “I dedicated it to him as a sort of ironic gesture since he’s the Analyst or Professor who sees “no value” in the experiences of the Lion which is supposed to be God, not Lionel Trilling as (Diana) apparently mistook it. Rather (an) ugly mistake, I must say”.

Here’s a third (1973) rendition a Salem State College’s prescient Jack Kerouac Conference (Allen points out that the poem is addressed to Kerouac). More on that conference here and here