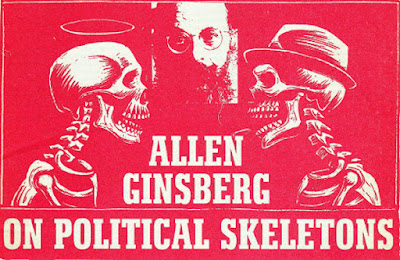 Eric Drooker – illustration for The Ballad of the Skeletons, as it appeared in The Nation, October 23, 2012

Sleeve note:
“Among the earliest writings in this suite, echoing late Yeats‘ style. “Shadow changes into bone,” was my Kerouackian motto, 1948, intending to say that eternal prophetic poetic intuition (shadow) will turn out to be real (bone). Having heard William) Blake‘s voice I was headed for the booby-hatch for a season. Michael Blair’s arrangement’s midnight reflectiveness fits this rhyme’s mood and meter”

The air is dark, the night is sad,
I lie sleepless and I groan.
Nobody cares when a man goes mad:
He is sorry, God is glad
Shadow changes into bone

Every shadow has a name
When I think of mine I moan,
I hear rumors of such fame
Not for pride, but only shame,
Shadow changes into bone.

When I blush I weep for joy,
And laughter drops from me like a stone:
The aging laughter of the boy
To see ageless death so coy.
Shadow changes into bone.

“Shadow changes into bone”, we might also mentioned here, was the name of the very first “Clearing House For All Things Ginsberg”, the Ginsberg site, in the early days of the internet, before The Allen Ginsberg Project. Tip of the hat to the prescient “Mongo BearWolf”, the site’s administrator (the site’s long down but are you still out there?)