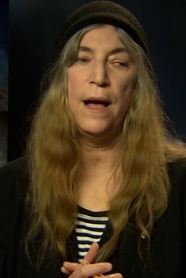 Patti Smith‘s birthday today. Patti Smith, who has done so much to spread the word about Allen.

For starters see here and  here

Here’s our note on her last year’s birthday – here

A “renaissance woman”, as Variety recently described her.

Tonight sees the second night of her annual New York City date (a second night – sold out, naturally) – in the East Village at Webster Hall

Fresh back from a meeting with…

tho’, of course, this wasn’t the first time – she did the very same gig last year

Here’s Patti speaking on spirituality.
No, she’s not a Catholic, but..
“But the imagination and the mind of man is so interesting and captivating. So I am attracted to religious arts from all faiths, from the poetry that comes from it. I’m attracted to the prayers and the vestments that people wear, but I don’t mistake these things for the absolute principal..”
“I look at these things as the beauty of man’s imagination. However, no matter how many times it’s said, or (how) simplistic it sounds, everything stems from love. If someone wanted to understand Christ’s teachings for instance, it’s based on love and to love one another. Everything else could fall away – the dogma, the art, the churches, everything. It’s basically to love one’s self, to love one another, to love the earth..”

The Variety article highlights her crucial (and similarly spiritual) involvement in Darren Aronofsky‘s 2014 Biblical epic, “Noah”. Mercy Is“her song,(which appears on at least three different occasions in the film – in the end, in a stunning arrangement performed by Patti with The Kronos Quartet) is up for consideration (and may very well win) an Oscar in 2015 in the Best Original Song category

Here’s more on Patti and that “Noah song”

Hear a beautiful accapella version of the song here. 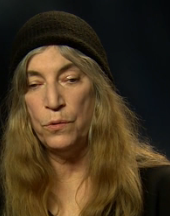 2015, by the way, will be the 40th anniversary of Horses and plans are afoot for big celebration 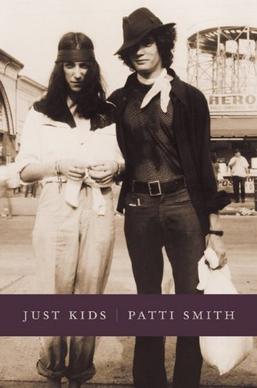 and a possible follow-up – “sort of in present tense”..”I wanted to write a contemporary book”, she tells Rolling Stone, “or write just whatever I felt like writing about, and it’s things going from literature to coffee to memories of Fred (Sonic Smith) in Michigan.”.. “It’s whatever I felt. I hopped on a train and kept going”

and there’s the new fiction (here’s a snippet):

and, while we’re at it, some old non-fiction 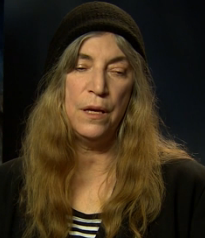