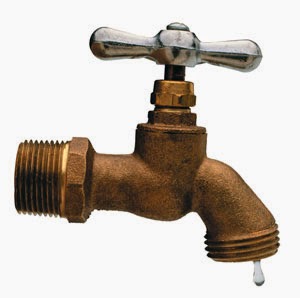 AG: There are two things I wanted to do today.  One is go through some more (William Carlos) Williams, to extend from his breath out into the room, to see how he observed the room itself, things going on in the room. I’ve run over some of these poems before in previous years, for those of you who were in the class.  It’s not too many, I guess, now.  So….“Good Night”

Nobody understood why he was writing about standing in his shoes in 1920.  It simply was ridiculous.  It had nothing to do with poetry.  So Williams wasn’t so much interested in poetry, he was interested in perception and in accuracy, truth, in a sense, if you wanted to use so abstract a word to refer to (a) very specific situation in art.  “Good Night” – (that’s the) title.

“In brilliant gas light/I turn the kitchen spigot/and watch the water plash/into the clean white sink,/ On the grooved drain-board/to one side is/a glass filled with parsley -/crisped green./ Waiting/for the water to freshen -/I glance at the spotless floor -/a pair of rubber sandals/lie side by side/under the wall-table/all is in order for the night/ Waiting, with a glass in my hand -/three girls in crimson satin/pass close before me on/the murmurous background of/the crowded opera -/it is memory playing the clown-/three vaue, meaningless girls/full of smells and/the rustling sounds of/cloth rubbing on cloth and/little slippers on carpet -/high-school French/spoken in a loud voice!/ Parsley in a glass,/still and shining,/brings me back. I take a drink/and yawn deliciously./I am ready for bed.”

AG:  Well, then, that’s a perfect example of a zazen reverie of the gap between thoughts, the luminosity of perception when perception is clearly focused:  “In brilliant gas light/I turn the kitchen spigot” – and the luminosity of the language and the sense of the language is actually correct – “the spigot”.  It’s a spigot.  That’s probably the first time the word “spigot” came into American poetics.  Somebody wrote about a spigot.  (He used “spigot”) instead of (a) “fountain”,  instead of a mossy fountain – a kitchen spigot.

Which satisfies what Walt Whitman also called for when he said to the Muse, “We’ve already paid those immensely overpaid accounts to Greece and Rome and the classics..Now (it’s) time for the Muse to come into the kitchen”. [Editorial note – the allusion presumably here is to Whitman’s “Song of the Exposition” – “Come Muse migrate from Greece and Ionia”..”Smiling and pleas’d with palpable intent to stay,/She’s here, install’d among the kitchen ware”] – So here the Muse is here, literally, in the kitchen, with William Carlos Williams and he’s turning on the spigot

Peter Orlovsky [in attendance in the class]: The spigot, though is a wooden, a wooden..

AG: Well, it would be a spigot in a wooden barrel but I think also a spigot is used for..
Student 1 : Faucet
Student 2: Same thing
AG: Well, we gotta look it up in the dictionary.  In those days I bet the spigot was more used.  ..because he’s got a gaslight.  But spigot is … what is a spigot, actually, come to think of it..?
Student 1:  A faucet.
Student 2:  A wooden….
AG:  But is it the handle or is it the nozzle?
Student 1:  It’s the entire thing.
Peter Orlovsky: A wooden spout, a wooden stick that’s on top of the….
AG:  You’re thinking of a cider apple barrels only, I guess.
Student 1:  Yes.
AG:  I don’t think (that)…
Student 1:  In the West it’s known as a faucet,  East it’s probably spigot.

AG:  But he uses spigot.

Okay, next – “(A)nd watch the water plash”. He didn’t (use) “splash:. He had his own sound of water falling into the sink – “plash”. That was a regular word in those days. “(I)n the clean white sink”.Well, “On the grooved drain-board” – that’s really exact. The grooved drain-board, “To one side is/a glass filed with parsley” – and then, not only that (but) “crisped green,” So it’s really luminous in a sense of all that element of crisped green of parsley that we’ve seen in a fresh glass. It’s presented to your eyeball, to your eyeball, as a visible image. Clear, spare. clean, exact, sticking in the mind. You’re actually there present, or he is there present. You know that he is there and actually present in that he sees the elements, can sketch the elements, or pick out those elements which will reconstitute the same little sensation (petit sensation) in other peoples’ minds, or eyes – Mind’s eye.

“Waiting/for the water to freshen-” – that I found a great miracle of this poem, because I had stood by a kitchen sink with the water on, waiting for the water to get colder, but (for) years I had never known that I was waiting for the water to freshen.  It’s kind of an old-fashioned way of putting it – “to freshen.”  It’s really quite right- “to freshen.”  It’s not that it gets cold, it’s that you don’t want that old dirty pipewater, you want the running, fresher, fresh water.  And at the same time, that sense of freshen, oxygenate, chill out. I’d never heard (“to freshen”), but it’s old country talk, too. I’m sure old grandmothers (said), “Oh, wait a minute – the water’ll freshen in a minute, keeping running it.”

Except the mind does.  He’s waiting for the water to freshen – “I glance at the spotless floor–:/a pair of rubber sandals/lie side by side” – I guess his wife’s?, or maybe a little girl’s, his daughter’s? – “under the wall-table/all is in order for the night.”  Coming back – “Waiting, with a glass in my hand.”

So he’s back to himself, again.  Like back to the breath – “three girls in crimson satin/pass close before me on/the murmurous background of/the crowded opera-” – So he’s spaced out completely into it. Then he comes back –  “(I)t is memory playing the clown-” – So he’s aware of it.  So he awakens.

So actually he was there, still there waiting for the water to freshen, still there, Vipassina -insight into detail –  “a pair of rubber sandals/… side by side/under the wall-table” — so everything’s still clear, precise –  “Waiting, with a glass in … hand” – Then he goes out –  “-three girls in crimson satin/pass close…” –  but still notating quite clearly what was going on in his mind – “the murmurous background of/the crowded opera- ” …and “crimson satin” – So even his daydreams are precise.  He’s just used to that precision.

“On the murmurous background of/the crowded opera – dash- /it is/memory playing the clown-”  So he is aware that he’s spaced out.  Or he’s aware of the operation of his mind.  that he was there in the complete presence of the gaslight in the kitchen, and has gone off into a thought form.  A thought form has risen unborn.

“(T)hree vague, meaningless girls/full of smells and/the rustling sounds of/cloth rubbing on cloth” –  You know what we’re talking about?  He’s talking about little ballet tutus rubbing on – “(L)ittle slippers on carpet-” – I guess at the Rutherford dance class, run by Professor Federici.  “(H)igh-school French/spoken in a loud voice!”  There was a professor,  Gaetano Federici who taught music and dance and oratory in North Jersey in those days.  (grew a beard)…