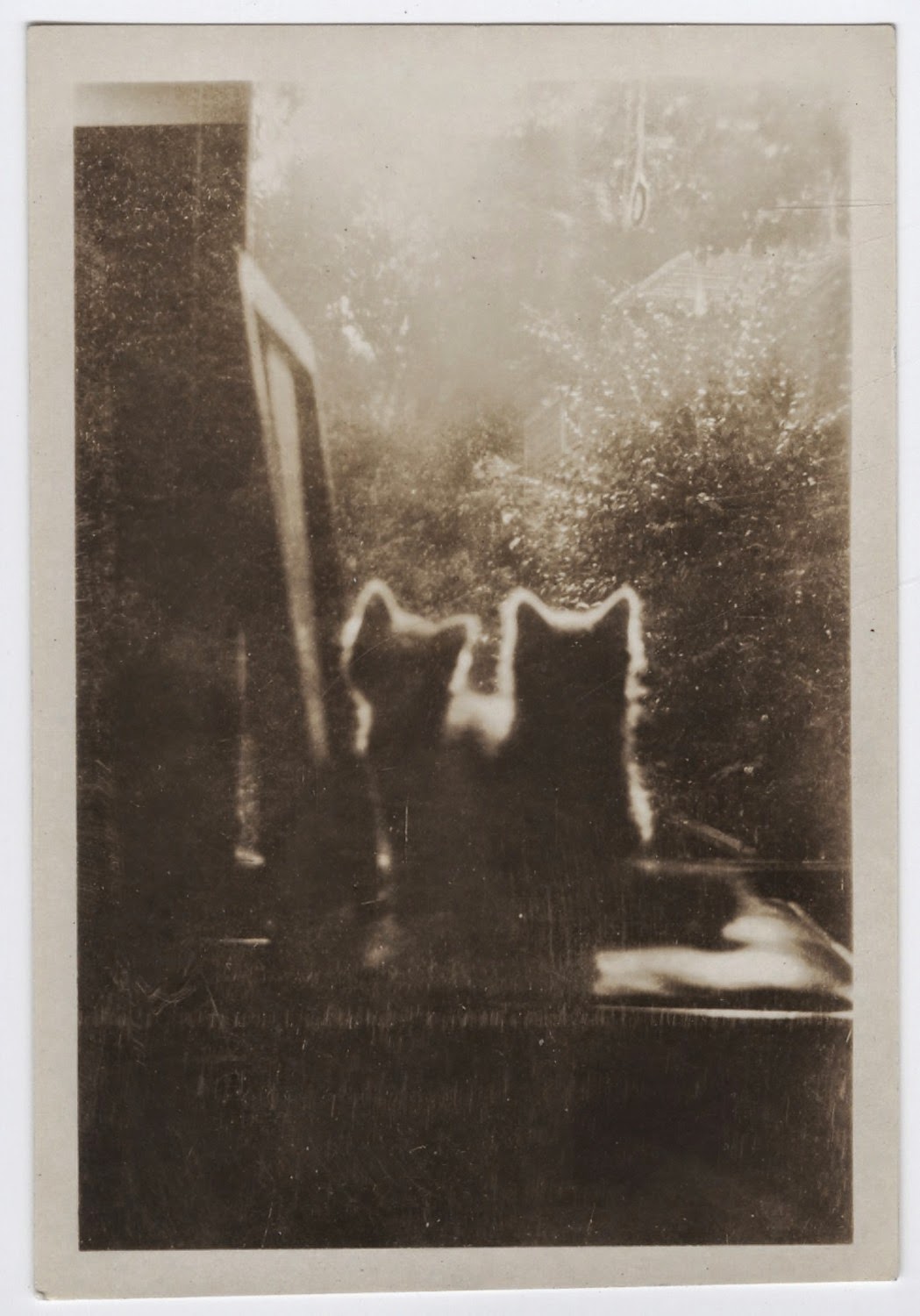 Two Kittens in Silhouette – a snapshot circa 1926, by, presumably, William Carlos Williams (included in his papers at the Yale Collection of American Literature Beinecke Rare Book and Manuscript Library

AG:  The next stage, classically, in Buddhist thought, in Buddhist structure, is Vipassina.  Does everybody know what that is?  From Samatha to Vipassina.  Raise your hand if you do. Raise them.  Come on.  If you don’t, raise your hand.  Okay.  So the majority don’t know that Samatha-Vipassana philosophy distinction, which is like a great subtle, very interesting shot.

Vipassina means insight. Samatha means quietening. Vipassana means insight. So what’s the relation? Well, the whole point is you shut up, you’re not pushing, you’re not trying to make up a poem, you’re not trying to make up a universe. You’re open, attentive, awake, drifting off occasionally and then coming back into this space, because the breath is leading you out into the space. So, after sitting for some time, or after paying attention for some time, pretty soon the noise of the traffic would begin to present itself in all its empty fury – the sounds (I was beginning to get into this last time), sounds would begin to present themselves with a clarity and sharpness of their own nature. Since you wouldn’t be trying to interpret the sounds but they would simply be rising, flowering and disappearing, they would have that quality of completeness. Because if you’re not trying to complete the sound by interpreting it or figuring out what it means particularly, beyond what it represents, it has a funny kind of roundness and sharpness.

That quality is called, in Buddhist terminology, the “unborn” quality. “Unborn” in that you’re not trying to trace its roots. It’s just there, like a flower in the air. So, in that sense, the whole universe is unborn. That… It isn’t that the universe is called “unborn”, not because it’s unborn. It’s just that if you tried to figure out where it got born from, you’d be like a ten-year-old kid walking down the block, saying, “Well, now God created it,, but who created God? And who created God before God created God? Or, if there was no God, then it must have been the first atom. Well, but who created the first atom? the first wave that went all the way back down?”. You’d never get to the end of it. So you finally wind up being in the middle of something which, in the twentieth-century they called “Existential“. It was just hanging there, just hanging there.

So that quality of “hanging there” with no qualifications, no explanations, no ancestry, no root to trace, no way of tracing it back, is a quality which is poetically called the unborn quality of sounds of the universe, of sights, and of thought forms, as well. Thought forms are referred to sometimes as “unborn” because you couldn’t figure out where (they) came from. Even if you were a microbiologist looking through a Freudian eyeball you still would wind up with waves somewhere at the bottom, with indeterminate waves The unborn.

So, actually, to a certain extent, the quality of unborn, fresh, completely clear presence has always been a quality of poetic imagery. If you realize that it’s unborn it’s a lot easier to arrive at than if you think you can make it up by fucking your mind with words over and over  to synthesize to. Once you realize that it’s a magical operation that just appears in the air, or appears in your mind in terms of phrasing – like turning on the water (tap) to freshen the water, turning on the spigot and waiting for the water to freshen, is a line of (William Carlos) Williams. Where does the word “freshen” come from? It’s a very accurate word. It’s another poem (that) I’ll get to.

So, from emptying, and not grabbing to thoughts and impressions, many rise, unobstructed, disappear unobstructedly, maybe some gap in between them and then another thought rises. Then, maybe, in between the gaps, where there’s no particular thought being pushed, you might hearm see, smell, and taste, and think, more sharply. Your sight, sound, smell, taste, touch, might become clearer to the moment, or (you’ll) get a profile of it, you get a profile of mental activities, and you’re constant waking up from these unborn thoughts. And as you wake up.. you’ll remember.Unlike a dream, where you go into the dream and you go from room to room in the dream and it takes hours, and when you wake up all you remember is you said goodbyeto the dragon but forgot what was going on in Turkey in the previous scene or where you were in China before that, or how it started in childhood – All in one dream. Because you didn’t wake up in the different scenes. You could only remember the tail-end of the dream. So maybe you go through fantasy – sexual fantasies, say – go through twenty-five people before you realize you’re in the middle of a sexual fantasy but you can only remember the last one. So if you’re constantly waking up from your thought forms then you have, actually, more access to what it was you were thinking. So the mindfulness cultivated then, is a mindfulness of what your thought forms were, as well as some mindfulness of the sights, sounds, smells, tastes, and touches  outside you. Your five senses plus the mind become somewhat clarified if you shut up and observe. So all this is just saying, “Shut up, listen, and observe”.

The Vipassana part, the inside part, comes when you’ve sunk deep enough into shut-up silence that you hear things sharply outside. So the great exponent of Vipassana (if you call it that – I’m putting a labl on it now – of American Vipassana, or insight detail accuracy) is William Carlos Williams (and his brother Imagist Objectivist poet, Charles Reznikoff.