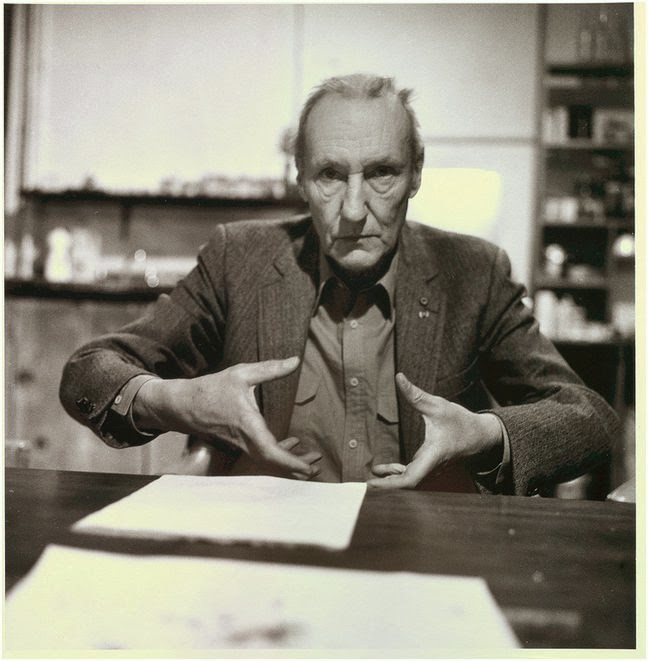 Ken Kesey: This is a piece called “Abdul the Bulbul”. [Editorial note –  published as “Abdul and Ebenezer”] It was published a while back [March 1976] in Esquire. It’s a piece from a work that I’ve been doing for some time called The Demon Box. The Demon Box is a way of trying to write a novel, and keep your mind scattered upon raising four teenage kids, and whatever else you have to do. I conceive of the novel as not being bound like a novel but in the form of pamphlets in a box that are about the same people, and, to some extent, about the same theme, which is the demon that is in us, and in the United States,and just in the dark. It’s called “Abdul the Bulbul”

(Kesey also points out that the “Stewart” in the story, “is not Stewart Brand”. “Often people think that.. no, it’s my dog, Stewart”)

[The text of “Abdul and Ebenezer” may be accessed here]

(Following Ken Kesey’s reading, there is a brief silence before Allen comes on (at approximately forty-three-and-a-half minutes in – recorded in media res), to introduce William S Burroughs)

AG: …on this charmingly historic full house at..the Jack Kerouac School of Disembodied Poetics series of poetry readings at the Naropa Institute… is the older writer, William Seward Burroughs, who, like Ken (Kesey), is compassionately lending his name, his power, and his intelligence, genius, to our school of poetics. William Burroughs lives here all year round (as does his son, the author, William Seward Burroughs Jr who lives at Yeshe House. It is appropriate that William Burroughs read here, he being a co-writer and friend to Jack Kerouac Kerouac and William Burroughs wrote an unpublished novel back in the early.. in the late (19)40’s And The Hippos Were Boiled In Their Tanks, each one contributing alternative chapters, on the basis, I think, of a news-broadcast that Burroughs had heard and told Kerouac (about), or heard when he was younger maybe, which was that a..there’s a fire in the St Louis Zoo (which is where Burroughs comes from) and the news announcer ended the account of the fire in the zoo with the (announcement)..and the hippos were boiled in their tanks”! Burroughs’ next major work was Junkie. written in (19)49-1950-(19)51, published under the pseudonym William Lee, and that was the inaugeration of his formal career as a man of letters (in this case, anonymously, because, in those days, it was actually dangerous to publish a book with the title Junkie” – at least the publisher thought so and I think authors and friends thought (it was) best to be anonymous on this one), followed by Yage Letters (correspondence with myself, a manuscript put together in New York in 1953), followed by the grand book Naked Lunch (which made an immediate impression world-wide and caused Norman Mailer to admire Burroughs with the praise that he was, if anyone, showing signs of genius in American prose, the one unique person as a novelist, Burroughs was the one person that Mailer could see directly, with a fire of that much intelligence, (as Kerouac had thought that..had said often that Burroughs was “the most intelligent person he knew on earth”). Soft Machine, Nova Express Ticket That Exploded. followed (written..begun in Europe, using part of cut-up. meditation process, cut-up of your own prose work, or mixed, peppered in, salted, sugared with New York Times or Time magazine or Arthur Rimbaud or Shakespeare’s Tempest as a way of putting your mind out on the page, cutting it up, as you might have a gap between thoughts and a reshuffling if you were letting go of thoughts in formal Buddhist meditation style. Burroughs’ prophetic and practical Yankee ingenuity had found a way of putting his mind out on the table to cut it up. That was a trilogy of novels. There was a long interview which many of you may not know about called The Job (which is a giant book-length interview with all of Burroughs’ opinions on.. (everything), from Heaven to Earth, Exterminator!, a novel,  Wild Boys, another novel – all of these, The Job, Ticket That Exploded, Soft Machine, Wild Boys, all provided all sorts of cultural imagery which was picked up by the younger more sensitive rock people, and so, they were actually, in England, bands called Soft Machine (and) Wild Boys (There’s) enormous satire in his work, tremendous clear solitary meditation, and, because of that, prophecy. He’s just finished his magnum opus of the last decade, Cities of the Red Night, a book which those who have seen have said is his most powerful work of his life (so) showing that one grows wiser, greater, and more powerful in age (rather than the current CIA-FBI rumor that people just get punkier when they get older) Cities of The Red Night is now being typed for publication. So, I hope you’ll welcome William Seward Burroughs 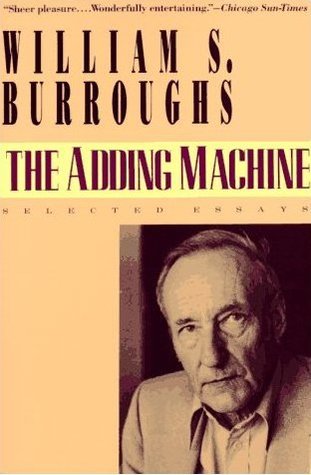 William Burroughs (beginning at approximately forty-eight-and-a-half minutes in): Can you all hear me? – I will start with my panacea for the world’s ills

“The trouble in this world is caused by about ten to fifteen percent of the inhabitants and getting rid of these fuckers would precipitate a paradise. Yes, if everybody could just mind his own business”…”what we call evil is quite literally a virus parasite…(and)  “hell hath no more vociferous fury than an endangered parasite”…”Probably the most effective tactic is to alter the conditions on which the virus subsists”..”I was on the panel with some old fuck called Magnus Pyke

At approximately sixty-one-and-a-quarter minutes in, Burroughs presents another selection (also later included in The Adding Machine, “Bugger The Queen”  “This piece that I’m about to read could not be published in England. I talked to the man who organized the festival and he said “no I’d never get another cent from the Arts Council” – [Burroughs begins]

“I guess you all read about the trouble the Sex Pistols had over there in England over their song “God Save The Queen (It’s a Fascist regime)”. Johnny Rotten got hit by an iron bar wielded by HER loyal subjects. It’s almost treason in England to say anything against what they call  “OUR Queen” – I don’t think of  (President Jimmy) Carter as “our President”, do you? – he’s just the one we happen to be stuck with at the moment. So in memory of the years I spent in England and in this connection I’m reminded of an old Dwight Fiske song, a sort of a bread-and-butter letter, “Thank you a lot Mrs Lousberry-Goodberry for an infinite weekend with you… (five years that weekend lasted)…For your cocktails that were hot and your baths that were not..” – (cocktails and baths gravitate towards a room-temperature in England) – So, in fond memory of those five years, I’ve composed this lyric which I hope someday,someone will sing in England. It’s entitled “Bugger The Queen” – “My husband and I” (the Queen always starts her spiel that way) – My husband and I/ the old school tie/ Hyphenated names/ Tired old games/ It belongs in the bog/ With the rest of the sog (“bog” is punk for the W.C.) – Pull a chain on Buckingham/ The drain calls you”MA’AM” (you have to call the Queen, “Ma’am”, you know).” – “The audience takes up the refrain as they surge into the streets singing “BUGGER THE QUEEN”!  Suddenly a retired major sticks his head out of a window showing his great yellow horse-teeth as he clips out “Buggah  the Queen”. A vast dam has broken. It’s like in Ireland where they have a form of life known as The Gombeen Man. Now a Gombeen Man is a blackmailer, police informer, receiver, money-lender. In small villages, he often runs a shop and leans on the scale when he comes to the punch line..”Well now, Lord Brambletie, I always say that what a gentleman does in his own house is a gentleman’s business, but there are those as thinks otherwise…”  (Lean…lean..lean)…..for an Englishman, making it in front of the Queen’s picture is like trying to have it off with a Gombeen Man at the foot of your bed…”Don’t mind me – like a spot of fun meself you know””..”Now to come right out and say someone is a Gombeen Man is admitting you have something to hide, some reason you can be blackmailed, and so a good Gombeen Man may string it out for years before the moment of truth, when everybody looks into his neighbor’s eyes, and says… “Did he lean on you?”” The Queen is the fountainhead and motherlode of a snobbery that poisons the dank air of England with a smell of brussels sprouts cooking to a soggy green paste”…”Prince Philip comes out to say that after years of being the Royal Consort like a bloody stud horse, all he has to say is, “BUGGER THE QUEEN!”” … “It’s like a re-make of the Magna Carta. Owing to a power-shortage the Queen signs her abdication by flickering torchlight…and “good riddance to the Gombeen Woman”

The third selection (beginning at approximately seventy-one minutes in) is introduced by Burroughs “This short unpublished piece [Editorial note, later incorporated into The Place of Dead Roads – “The Count de Vile”]  is based on actual experience. I once was stranded on an island near Venice and had to wait five hours for dinner because the servants always eat first. I did actually know an Italian Count named the Count de Ville in the diplomatic service and when I asked him if he was going to have another appointment, he said that “I do not know if they will give me another assignation” – “An old gentleman was standing by the fire-place. At the sight of me, his thin face lit up and glowed with incandescent charm”. ..”the old chateau crumbled into the oily waters, jugged hare, portrait galleries, the lot, erased like an error”

At approximately seventy-eight minutes in, Burroughs reads his final piece – “Now this last piece is derived from a rather enigmatic phrase that I heard in a dream – “Where Naked Troubadors Shoot Snotty Baboons” – so I elaborated this little piece here – “Boys in cod-pieces and leather jerkins carrying musical instruments from the Middle Ages invade…”…”If these walls could speak what tales they could tell”

As an encore  (approximately eighty-one-and-a-half minutes in), Burroughs] “a short piece from Cobble Stone Gardens, “American Express” – ( BJ? – that frantic character was drummed out of the industry. He invites Nick Shanker of World Films and Philip Granger of Amalgamated over for a possum dinner and he is boiling a yellow tom cat in a bidet full of piss heated by two leaky blowtorches…”…. “North wind across the wreckage weed grown tracks iron stairways rusted through a maze of canals and swamps overgrown dams and locks flaking stucco houses vast hot dogs and ice cream cones covered with vines…”).