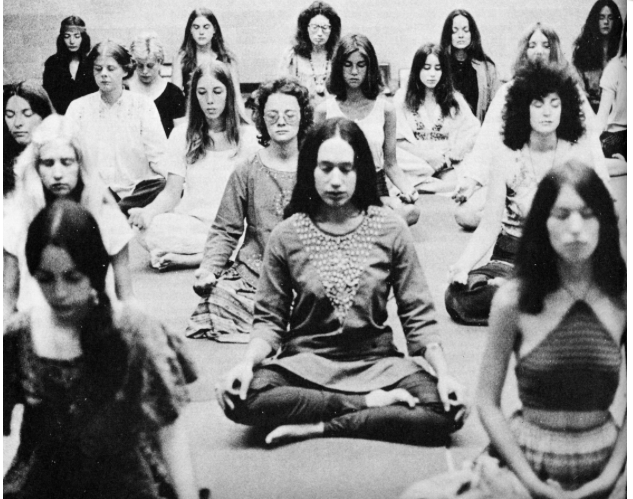 Starting today, transcription from another of Allen’s Naropa Institute classes – Meditation and Poetics. These lectures took place in Boulder in the Summer of 1978. This first, on July 17.

For those of you who are somewhat familiar with (Jack) Kerouac‘s poetry, or mine, or (William) Burroughs’or Gregory Corso‘s, or a lot of the poetry from San Francisco, one of the main motifs, thoughts, ambitions, themes, bullshit, propositions, was expansion of consciousness, alteration of consciousness, widening the area of consciousness, “Supreme Reality”, any number of a series of phrases invented from the age of eighteen to the age of fiftyBut the basic idea was some psychedelic, or mind-manifesting, or mind-expanding perception, or search So the logical culmination of a number of years’ practice is this course – “Meditation and Poetics”, finally trying to put together the poetic practice of the last twenty-five years….[tape breaks here and then resumes in media res] … developments in that, in poeticizing, (in) how you go about writing a poem.

(And), at the same time, there was always the Dharma Bums element out of Kerouac. That is to say, seekers, people acquainted with meditation, or getting into meditation, or making jokes like Zen lunatics – faking it – faking some knowledge of Eastern wisdom, faking it accurately enough to actually get into it. Just like, as they say, when you meditate you just simply fake the meditation. You make-believe that you are meditating amd after a while you find yourself sitting there. I think that was (Chogyam) Trungpa‘s analysis.

So we have a unique opportunity here to get together those two traditions — poetics and meditation.Because you’ve got a background of Zen masters (and) Tibetan lamas in this scene, and, at the same time, you’ve got a background of practicing poets, all of whom have specialized in mind consciousness – examination of mind consciousness. (And that’s been the big theme in twentieth-century American poetry, (and) international poetry), yes. I’ve been sitting for about five years steadily – well, steadily enough. Not every day, but steadily.And I’ve been writing poetry for twenty-five, so I’ll be speaking directly out of my own experience, yes.  But for all that to make any sense we’d all have to be involved in writing poetry, (which I hope we are), and all involved in some form of meditation, (which I hope we are).Now in very casual and irritable conversation with people who were signing up for the course, I said, “Get your ass over to the meditation-instructor and find out about that as homework.”(Some people (had) asked (me) what we should be doing?) First of all, can you hear me?

Yes? – Some people (had) asked me in advance what the homework was, so I suggested starting with William Carlos Williams’ Collected Early Poems, and with Charles Reznikoff’s Volume I of his Complete Poems, Black Sparrow Press. [Editorial note, Reznikoff’s poems are now available as a single volume]. I suggested that because, as the course description says, I’ll be trying to structure the course as Hinayana, Mahayana and Vajrayana styles of poetry.That is, trying to find samples of poetry that fit into those different styles, and I’ll be trying to explain what those different styles are, and find samples of poems that fit into the styles, and also explain what the difference is. Are there any Vajrayana practitioners here? So there are some. So those of you who are Mahayana practitioners here? Okay. So the Mahayana and Vajrayana practitioners. And how many Shamatha Vipassana  practitioners are here already? Okay. So those of you who are already acquainted with Mahayana and Vajrayana styles will have to help me along in the correct analysis part and in the structure because my mind is dim. It goes in and out.I taught this, actually, at a seminary where everybody was a Vajrayana expert, or was at least studying.  I was a Vajrayana beginner and so actually it was a collaborative thing, and to the extent that you can collaborate, those of you who have specialized knowledge of meditation, that would be great. Because we actually would have a real solid thing to work with, here.  Trying to find the equivalent states of mind or attitudes expressed in poetry as they are manifested in different kinds of meditation practice.

[ Audio for the above may be heard here, beginning at the beginning and concluding at approximately six-and-a-quarter minutes in ]