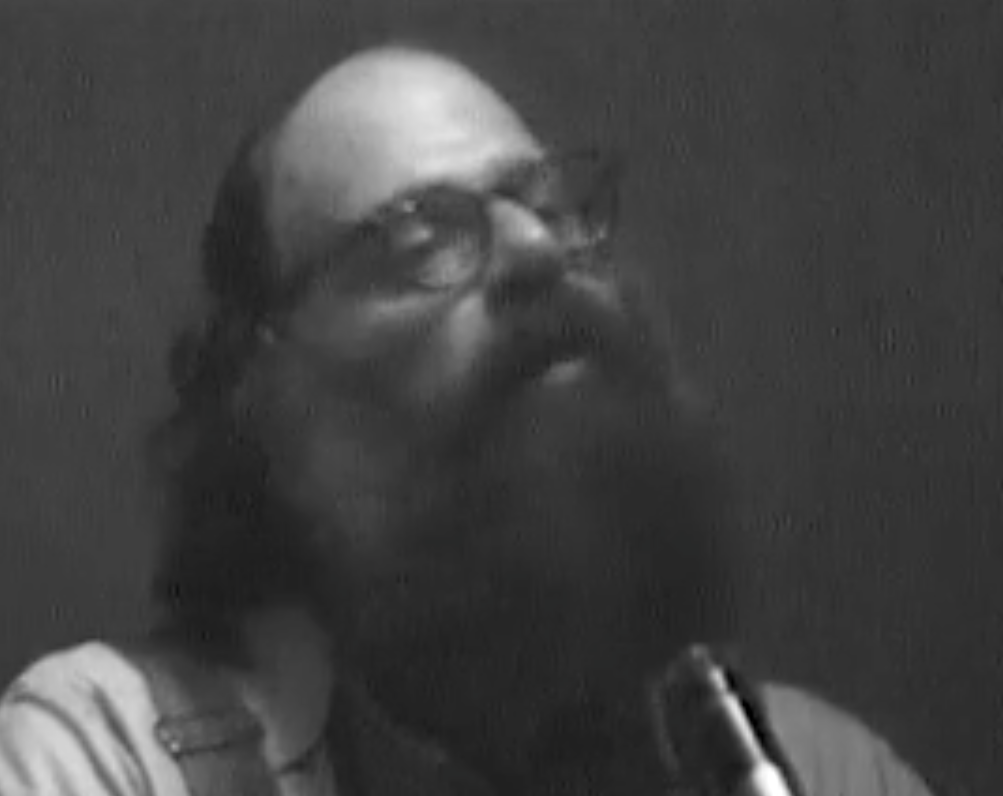 Part One – [Be aware of the technical difficulties at the very beginning (for approximately the first minute), but audio and video soon emerge] and Allen is seen close-up, in mid-song, ecstatic joyful, playing the harmonium, accompanied by two young Scottish guitarists, (Allan and Victor), and repeating the refrain from William Blake’s “Spring” poem (from “Songs of Innocence“) – “Merrily, merrily, we welcome in the year” (Allen, at one point, slyly changing the lyric – “Merrily, merrily, we welcome in the apocalypse”). This rendition goes on until approximately three-and-a-half minutes in, after which, Allen introduces several further settings of verses from that volume, starting with  “On Another’s Sorrow”

(“Can I see another’s woe,/And not be in sorrow too?/Can I see another’s grief,/And not seek for kind relief?”….”O! He gives to us His joy/That our grief He may destroy;/Till our grief is fled and gone/He doth sit by us and moan”), “Infant Joy” (“I have no name/I am but two days old/ What shall I call thee?”…”..I sing the while/Sweet joy befall thee”), “a version of “The Lamb”” (“also turned into mantra at the end, because some of the lines in Blake are suitable for that”…) – (“Little lamb, who made thee/Dost thou know who made thee”…”Little Lamb, God bless thee/Little Lamb, God bless thee”) – and (starting at approximately twenty minutes in) – “Night” (“The sun descending in the west,/ the evening star does shine,/The birds are silent in their nest,/And I must seek for mine…”…”..For, washed in life’s river,/My bright mane for ever/Shall shine like the gold,/As I guard o’er the fold”) – “I have tuned a lot of these songs and try to vary the ones I sing, so sometimes I’ll improvise on them, and so sometimes make mistakes, but rather than a fixed mode, (I’ll) try something a little more dangerous”.

Allen next turns to reading his own poetry, beginning (at approximately twenty-six minutes in with “an odd poem, half-poem half not-poem, a chain poem, which I’ve never read aloud (there not being any particular occasion to do so), written on May 8, 1972, by Chogyam Trungpa Rinpoche and myself. (Chogyam Trungpa is a Tibetan lama who worked at Samye Ling and then now is working in America). So this was written in Boulder, Colorado” – Allen proceeds to read a long Scottish-themed/Buddhist-themed improvisational collaborative work  (“Moon has eclipse/Walking down Market Street by the parking-lot..”…”Dharma practice is militaristic/It is a work of art/Save us from the Church?”) – “Most of the Scottish material in this”, he notes, “was contributed by Chogyam Trungpa, who had been here before me”.

Next (at approximately thirty-one-and-three-quarter minutes in), Allen begins some introduction to  “Continuation of a Long Poem of These States “ – “This is July 1972, beginning by flying to the political convention in Miami. That is, the Republican and Democratic Conventions were taking place, so these are, like, prophetic notes, taken on the airplane, going down to get tear-gassed. It’s, like, an evanescent poem, in that it mentions all the Presidential candidates gone that year already into eternity, and so, in that sense, a complete waste of literary time, but I like it. I haven’t published it, and (have) read it rarely, but it’s interesting, because it’s actually, like, a little slice of that particular time, with all the paranoias and the fantasies of that moment.”

“And it is based mainly”, he continues,”on Chogyam Trungpa, Milarepa, that Tibetan line of descent of Tibetan..meditation, the main mantra of which is A-H [Allen breaths out – AH! AH!] – as mantra – AH! (for purification of speech – AH! – that is the vibe in the larynx itself, so wiping out all babble, so it’s physiological purification of the speech-center – AH! – as well as appreciation of limitless spaciousness, no conclusion..” [audio and visual at the conclusion cut out, leaving Allen in mid-speech] … 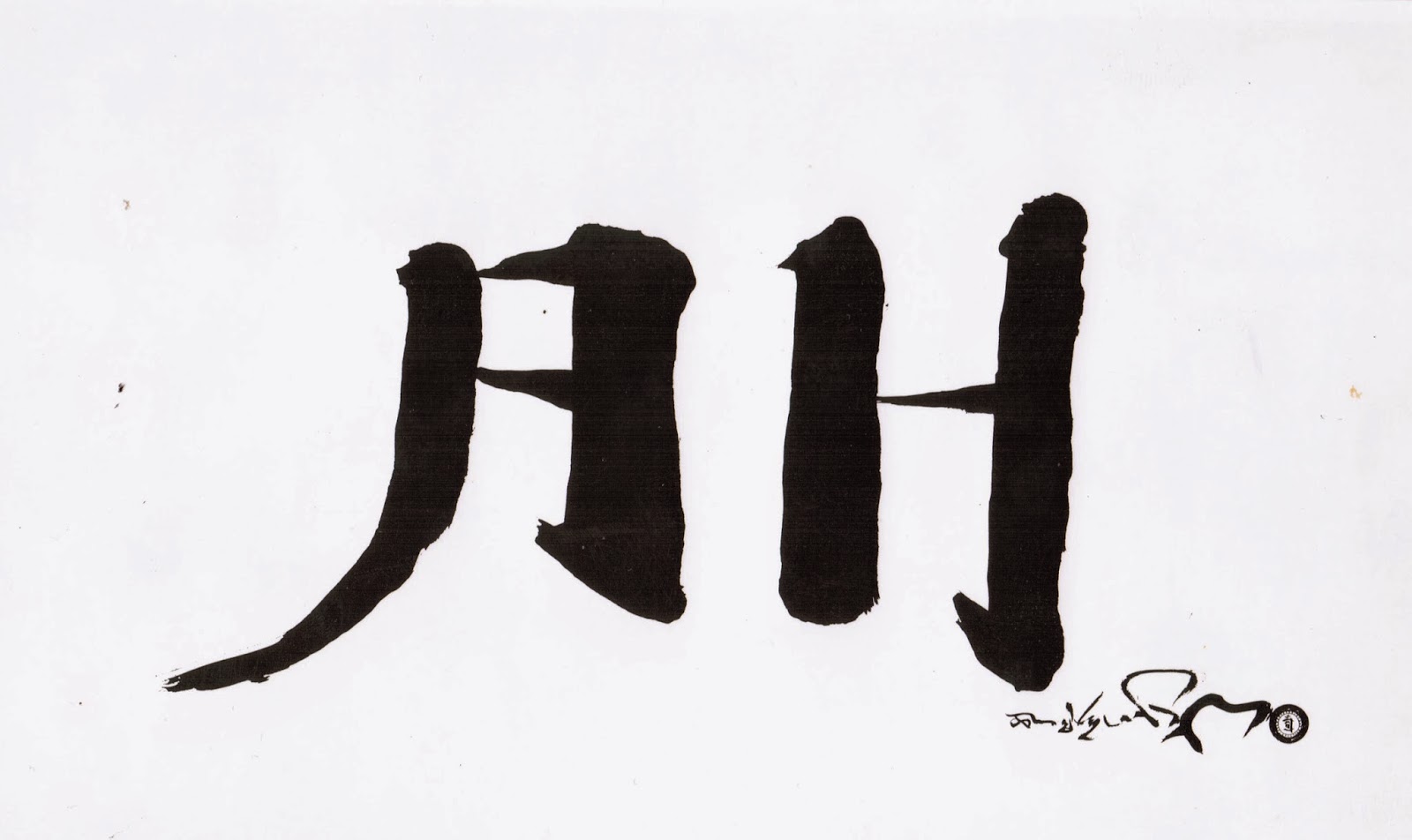 Part Two – [this section begins, as does the first part, with some technical cue-ing up of audio and video tracking but then, by approximately fifteen seconds in, audio and video are in synch] – and Allen can (again) be heard singing from William Blake‘s Songs of Innocence – this time, the refrain from “Nurses’ Song” – (“And all the hills echo-ed” (“I over-read one time and didn’t get back in place” (he briefly critiques his performance), “but that was my fault”) – Next (after banter among the musicians  and sound -check – “How’s the balance among instruments? Can you hear the guitars?”..”Is Vic audible?”), another song, this time, one of Allen’s – “Broken Bone Blues” (from First Blues) [starting at approximately two-and-a-half minutes in and concluding at approximately six-and-a-quarter minutes in] – “Broken Bone, bone, bone all over the ground..”…”And I’ll come back and bless you again”, followed by another (similarly in First Blues) – “Prayer Blues”(“When you break your leg/ there’s nothing to stand on”…”Lord Jesus Come (Jesus Christ)/Come in my heart…”)

Next [at approximately fourteen-and-a-quarter minutes in], having dismissed the musicians, Allen reads solo – “Yes And It’s Hopeless” (“A hundred million cars running out of gasoline/A million coal stoves burning carbon mist over city/Hopeless, I’ll never get laid again…”/..”the live corpse of Ginsberg, the prophet, hopeless”).  followed by “Returning to the Country for a Brief Visit” (“Each little section has a title from a Chinese poem”, Allen explains – “In later days, remembering this, I shall certainly go mad” – “Reading Sung poems, I think of my poems to Neal…”…”How will all these people worship the Great Mother?/ When all these people die will they recognizr the Great Father?”) [both these poems subsequently published in Mind Breaths]

[AG on the musical collaboration]: “The main thing is the songs (are) pretty good, and we hadn’t rehearsed it at all, we just picked up from about three thirty-second conversations about each song, at one point or another – but no rehearsal”]

“It’s ten-thirty now so I don’t know what to do – read a poem two hours long?…I’m looking for.. Shall we take a break or go on now?..” – [Allen decides to read] –“Washington Indo-China Peace Protest Mobilization, May 9th,1970” (“White sunshine on sweaty skulls/Washington’s monument pyramided high…”….”from the paranoia smog factory’s East Wing”) (“That was written on the platform on that day up at the.. I was singing “..merrily merrily, welcome in the year” (from Blake’s “Spring”), later in the day, and tear gas passed through”)

“We’ll be back Sunday night and I’ll probably do somewhat different poems and different Blake (some..different Blake) and  other various matters”. [Tape concludes with brief snatch of conversation between the cameraman and guitarist Allan Tail – “I got some great double-frames of you and Allen, Allan“]