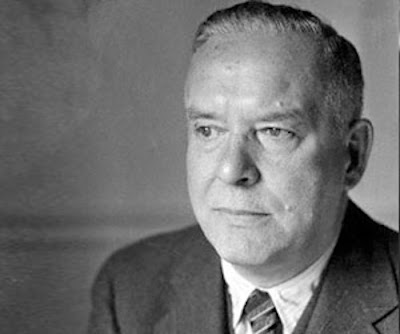 Wallace Stevens born on this day.

Q: You talk about (William Carlos) Williams as well as (Walt) Whitman and even (T.S.)Eliot -did Wallace Stevens have any sort of influence on your poetry as well?

AG: Well, my father was a teacher and a poet. And so I ran into all these influences very early, Stevens more than Williams when I was a kid, particularly “Downward to darkness, on extended wings” or “Complacencies of the peignoir..“, I’ve forgotten the title [Editorial note – both are quotations from Stevens’ poem – “Sunday Morning“] and I’d read a lot of Stevens but he always seemed to me too formulaic in his form, it wasn’t an open enough form, and also he was very diffident of having any kind of passionate, sincere, open-hearted, cheerful emotional reality. It’s more like a very distanced philosophical poetry, and  in some ways.. (although they were great friends, Williams and Stevens, you know, like Stevens wrote the preface to Williams’ first Collected Poems [Collected Poems 1921-1931 published by the Objectivist Press], a preface which Williams found a little insulting, because Stevens called him “a Romantic”, or something like that – (thinking that) Williams was romanticizing naturalist reality – garbage cans.. garbage pails and wheelbarrows – that Williams was romanticizing it (Williams was only trying to be accurate and thought that Stevens was, like, this.. had this romantic exaggeration and afflatus in his language).

So I always found Williams more interesting as a model and I think most people have (though the academic poets have gone more for Stevens because there’s less grounding, you know, there’s more abstraction and generalization). You can get away with more bullshit with Stevens than you can with Eliot.

With Williams you really have to have an object, with Stevens you have a general idea and you never have to ground it really, maybe one grounded realistic reference per poem.

Here’s Stevens reading (“So & So Reclining on Her Couch”)