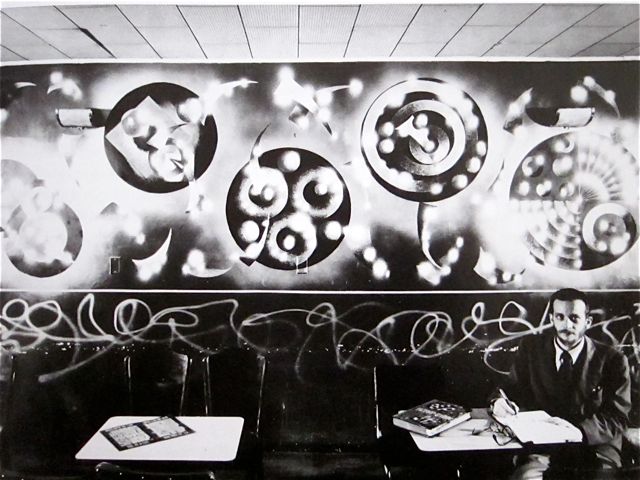 Gerd Stern: “It was a great success. The auditorium was always full; everybody paid except Harry Smith. Harry Smith was someone who was a spectacular creative being who died recently [1991]. I first met Harry–I think the first time I came to San Francisco he was working as a photographer for the Examiner, and he was living in a black hotel – he was pale white – in the Fillmore. He had done these way-ahead-of-their-time murals at Jimbo’s Bop City – which was just like it sounded – in the Fillmore in return for food. I think it was Philip Lamantia who introduced me to Harry, and we sat there eating Harry’s favorite food which was casaba melons–on the house; they kept them there just for him. Then he took us to see some of his visuals at his hotel. But when we reached the lobby we had to take our shoes off, and we had to not say a word between the time we got in and the time we left. We then crept up the stairs, and he whispered that there was a whore living in the next room, and she was in the pay of the FBI or some government agency to keep an eye on him. It was a paranoid, delusional complex that he had going. He took us into his room, and it was totally dark. He turned on a flashlight which had a cardboard tube attached to it. He put these works on the floor, and he illuminated them slowly so that we could see them, and in total silence we crept out holding our shoes and went down the steps and put our shoes on. That was Harry Smith.”

“Harry came to one of the “Psychedelic Theater” pieces, and he started screaming about how he was whatever he was, that he wasn’t about to pay, these were all old friends of his. Timothy (Leary) and Richard (Alpert) (Ram Dass) had said there were nothing but spongers and people who didn’t have any money in this world of ours, and they all wanted to get in free, and they all were friends of ours. We had set a definite policy: No one was going to get in free. Well, Harry got in free because I told Timothy that if Harry didn’t get in free, there wasn’t going to be a show and there’d be a riot.”

“I keep talking about alcoholics, but there happened to have been a lot of them, and there are still a lot of them. Harry was one. Most of these people in this world mixed the alcohol with drugs, so there were episodes of total insanity.”

And here’s a couple more Harry postings – here and here