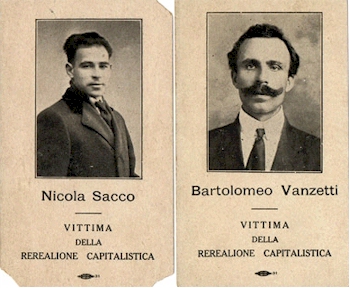 Student: Except they went deeper.

AG: ..they were Italian fish-peddlers (except they were sort of cultural heroes of their day) – What’s the story do you remember?

Student: They were accused of anarchist bombing in a… I don’t even know if the bombs went off, but they became symbols, and there’s a lot of evidence that they were actually innocent. They were put on a show-trial. The entire international Communist world rallied to their defense. They were..

Student: ..that gets nailed and..

Student: And not..and not simple, straightforward wonderful guys, I mean..I forget if it was Sacco but I think it was Sacco, tremendously troubling, I mean, at one point, “Let this cup pass from you” – “Jesus!  – I don’t want that! I don’t want to be a national hero!”

AG: A fish-peddler, who read books in Italian, and knew..had come from Italy and could speak English, just about (both of them), worked together, knew each other, around Boston, and had an anarchist circle. And so it was assumed they were framed for some kind of anarchist bombing..during a period of early McCarthy-ism, 1927..

Student: I don’t think… did the bombs ever go off though..?

Student 2: The bombs went off. I think they killed somebody.

Student 2: Well, because, yeah, because the sentences were more severe weren’t they? – Didn’t one of them get the execution..electric chair, so..

AG:Both did (so – their last speech to the court)

Student 2: They both did. So they must have killed someone in this bombing ..

Student:There was a bombing but there’s no proof , if I read the history, that connected them to the bombing. And that’s why it was.. because they, philosophically, believed in it, and wrote about it, or spoke about it, anyway – but there’s no hard evidence that they did it.

AG: There are still books coming out about it. Last year there was another new book saying that they were guilty and contradicting the one before that said they weren’t guilty. It’s like the (Alger) Hiss case. However, beyond the whole thing, his (words).. One thing that happened during the trial was (his) last speech to the court, which triumphed over all the adversity. Actually, Justice Felix Frankfurter was one of their lawyers and the judge who condemned them, who refused to hear their (trial?) was Robert Lowell, the poet Robert Lowell’s uncle!, which… and that even turned Robert Lowell’s mind upside-down as a kid, because he always felt the family guilt, and that’s why in World War II he was a Pacifist and went to Consciencious Objector camp. So Robert Lowell was scarred by this case. So this case is very important in American literary history because it’s also one of the few examples we have of direct primary utterance being as great as a poem, like the Gettysburg Address or the Cross of Gold speech by William Jennings Bryan(which I think we also have in here)

I have talked a great deal of myself

but I even forget to name Sacco.
Sacco too is a worker
from his boyhood a skilled worker, lover of work
with a good job and pay,
a bank account, a good and lovely wife,
two beautiful children and a neat little home
at the verge of a wood, near a brook.
Sacco is a heart, a faith, a character, a man;
a man, lover of nature, and mankind.
A man who gave all, who sacrifice all
to the cause of liberty and to his love for mankind:
money, rest, mundane ambition,
his own wife, children, himself
and his own life.
Sacco has never dreamt to steal, never to assassinate.
He and I have never brought a morsel
of bread to our mouths, from our childhood to today
which has not been gained by the sweat of our brows.
Never…
Oh yes, I may be more witfull, as some have put it;
I am a better babbler than he is, but many, many times
in hearing his heartfull voice ringing forth sublime,
in considering his supreme sacrifice, remembering his heroism
I felt small at the presence of his greatness
and found myself compelled to fight back
from my eyes the tears,
and quench my heart
troubling to my throat to not weep before him:
this man called thief and assassin and doomed.
But Sacco’s name will live in the hearts of the people
and in their gratitude when Katzmann’s bones
and yours will be dispersed by time;
when your name, his name, your laws, constitutions
and your false god are but a dim remembering
of a cursed past in which man was wolf
to the man…
If it had not been for this thing
I might have lived out my life
talking at street corners to scorning men.
I might have died, unmarked, unknown, a failure.
Now we are not a failure.
This is our career and our triumph. Never
in our full life could we hope to do such work
for tolerance, for justice, for men’s understanding
of man, as now we do by accident.
Our words, our lives, our pains – nothing!
The taking of our lives – lives of a good shoe-maker and
a poor fish-peddler –
all! That last moment belongs to us –
that agony is our triumph

“But Sacco’s name will live in the hearts of the people/and in their gratitude when Katzmann’s bones/ and yours will be dispersed in time” – (Katzmann was the prosecutor wasn’t he?)…”when your name, his name, your laws, constitutions and your false god are but a dim remembering/of a cursed past in which man was wolf/to the man…” – (There’s more to the speech, but then the conclusion) – “If it had not been for this thing/I might have lived out my life/talking at street corners to scorning men/I might have died, unknown, unmarked, a failure/Now we are not a failure./This is our career and our triumph. Never/in our full life could we hope to do such work/for tolerance, for justice, for men’s understanding/of man, as now we do by accident.Our words, our lives, our pain – nothing!/ The taking of our lives – the lives of a good shoemaker and/a poor fish-peddlar -/all! That last moment belongs to us -/ that agony is our triumph”

Actually, that’s, like, the most moving poem in the book, like totally out of reality,  like straight out, and brilliant –“for lives of a good shoe-maker and a poor fish-peddler – all! /That last moment belongs to us – that agony is our triumph.”- Of course, it’s prose and it’s a speech. It’s unfortunately arranged in lines here by an anthologist. It doesn’t need lines, it needs..a block of prose so….   tape [and Allen’s class on “Expansive Poetics”] ends here

[Audio for the above can be heard here, beginning at approximately eighty-eight minutes in and concluding at the end of the tape]