AG: So there’s also this little element of ecological perception, in what we know as an ecological  environmental view in (Marsden) Hartley (‘s poetry), in his noticing of the flowers around, and his awareness of the woods around, Lewiston, and his appreciation of them – “The Canadians came to the city – / giving it new/life, new fervors, new charms, new/vivacities, light/touches, pleasant shades of/cultivation, bring/ no harm to the city – (bringing (Jack) Kerouac to the city, actually – the French-Canadians) – “..bringing what it now has – a /freshening/ of city style, richer sense of plain/living./ Recently, I walked the streets of my/ native city/and there was gaiety in the air,/ My thoughts returned to a white/house in Ilowe Street,/a home with green blinds, the front/ones always shut,/where a poet of distinction lived,/wrote fine poetry,/cooked Savarinesque foods..”- [(Savarin  (Jean-Anthelme Brillat-Savarin’s Physiologie du Goût (The Physiology of Taste) was a great cooking book in those days)] – “…writing poetry that few knew/the worth of – and almost none know/the value, now./Wallace Gould,  if he is still fact,/ is a man of great/male beauty and gigantic proportion;/he is almost a complete/legend to us now, none of us know/where he is,/ or if he even lives at all..” – (There are manuscripts and texts of Wallace Gould that are scattered in early 1920 anthologies) – “Gould was, in the careful use of the/ word, a genius..” – (Now that whole sentence sounds like Robert Creeley” Gould was, in the careful use of the/ word, a genius..” – the use of the word “care” there, meaning care for place).

AG: A cared-for specific.   Pardon me?

AG: Yeah, well they’re contemporaries probably. No, Hartley is older probably. He’s a little earlier than Francis but not much.

Student: But he also has come into contact with Francis

AG: Right – [Allen continues reading] – “he had high vision and plain habits,/ he was/ a great cook, a superior pianist,/with a frantic/worship of Byron./He had image after image in photo of/his idol,/and an impressive replica in/plaster./ Gould devoted himself to Greek/outline, Horatian/simplicity, with pagan notions of/the/livingness of the moment./ He cared nothing for traditions,/customs, mechanical/habits – lived the quiet life of a/thinking being,/worshipping also his foster mother,/genial in his/behaviors,/out of which evolved/The Children of the Sun” – [(which I think is a book of poems which my father used to own, because that was a big sensation in the (19)20’s, I guess, or (19)30’s)] 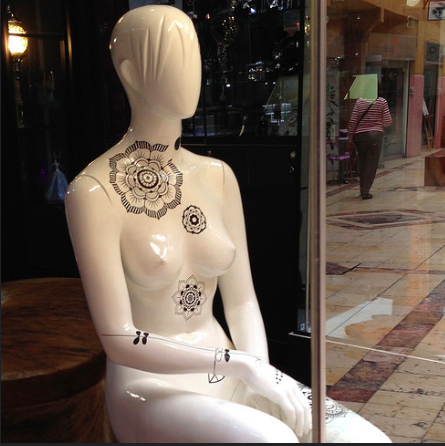 There’s one about his father, which is great  (“Family Album In Red Plush”),  but we’ll move on. I’ll just get to this little “Window Cleaner to Nude Manikin” because it’s an example of magical poetry, or Surrealist poetry, done in totally ordinary style with ordinary diction and an ordinary scene. I got one haiku off it, or a similar haiku – “Walking Boulder Mall Full Moon Midnight”, whatever – I started – “In the department store window,/ the naked mannequin/ observes her fingernails” – “He being the big thing he is/needs lots of room for his/cleaning window tricks” – (sounds just like (Peter) Orlovsky there) – “needs lots of room for his/cleaning window tricks,/So they made the window empty/though they didn’t take the naked/dummy out, she with her nose quite/some in the air – (totally American, that) – “she with her nose quite/some in the air/they often are so very debonair – (so he’s got a little, artistic, there, rhyme) – “he swishing this way and that with his windows wiper,/he thought everything was very fine/when suddenly the naked woman/said – / “big boy, why are you so cold to/me?”/”who’s goofy now? – the big boy to/the wax/woman said -/”this ain’t no place for anything,/ can’t you see for yourself it isn’t “/Beside I got plenty to do./I’m workin’ for my cheese and bread,/my job’s washing windows just now;/maybe later we could have a word/if things look so good.” – I’m workin’ for my cheese and bread,/my job’s washing windows”. (Oh, no, I see, it’s just a repeat – There was a mistake in the copying).
Student: It’s a mistake?

AG: No, the repeat is the mistake,  Yeah, it’s somebody who pasted up… those of us who pasted up the..   you cut out the last four lines so you don’t think he’s repeating himself and it doesn’t go down immortally, as a repeat, without a quote mark at the beginning.

I think that’s a great cute poem. And just taking the elemental stuff of everyday window cleaning and turning it into pure magic, and human magic.