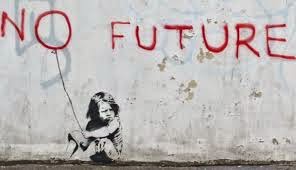 Student: Do you think that (punk) new wave (music) has God or has respect…

Student:  Yeah, I think they have..

The Clash, certainly, are totally political, totally heart-felt, I would say. To have to exist in a tough world they might appear tough, but they’re very very generous – totally. That was my experience of them, singing with them – total generosity and self-sacrifice for a spiritual cause, for a political-spiritual cause.

Student: But Allen, don’t you think that adolescence (in) every culture is a testing of yourself to discover yourself. And the anger..

Student: …the anger in punk is that most of these kids grew up in suburban environments that are just incredibly dead, more..

AG [pointing to the class]: All these kids did too.

AG: Not that there’s so many kids here

Student: It’s also a mistake to speak of it in such a monolithic way. The punk movement in England was very very working-class.

Student: Yeah. So it was very different to what happened in the States.

AG: Yeah.. we’re just talking about what we were thinking about here about the American punk.

AG: Yeah, there’s a whole bunch of punks that are just following the five-and-ten-cents-store fashion at this point. It’s like what they see in the

Student: How about the lyrics (of) like Costello (I think that’s his name)

Student: His song, “There’s no future”  (that’s (part of) the lyrics of it)
AG: Those are the change…  the Sex Pistols

AG: “No future for me, no future for you”. Well, you know.. but I dug that, as being the frankest political statement of the decade. That the middle-class and military was preaching that we have a future if we trust them and if we trust the American Way, and if we trust the normal middle-class conspicuous consumption consumer society. And (that) if you go through school and behave and do it right, and don’t interrupt, and don’t get up on the stage and take others’ place, you’ll be alright, and you can get a job later on, and be whatever it is, and (get) insurance. And, particularly in England, where the Sex Pistols came  out, with total unemployment for blacks (well, sixty percent unemployment for blacks, and thirty-five percent unemployment for white kids), and, actually (in) England, as (William) Burroughs (had) described (it), “a fish caught in a shrinking pond”, it was an actual statement of fact. And only until the English recognize that will they ever be able to have any kind of future, until they can hit bottom mentally and recognize where they’re at.
So I thought it was a useful social statement, though likely to be misinterpreted (like Jerry Rubin’s “Kill your parents” – which was actually an elevated thought, but misunderstood a little, by him even) – he said (he said himself that he thought that was a mistake, because he didn’t understand the effect).

Student: Yeah.. I’d just.. with the whole new wave/punkmovement, I would just like to see more vision

Student (CC): Well I’m not sure if there is any vision.

AG: Well, you’ve got to write some new wave lyrics. That’s what I’m doing. I’m writing new wave lyrics to lay on a trip – that visionary trip – to do something about it.

Student:  (The music that I) hear in my head is more (interesting)

AG: Don’t just sit there, do something about it!

Student: No, that’s all