AG: Uh-huh. Pass it around. Pass the little trillium around – [Allen continues reading Marsden Hartley’s poem on Lewiston, Maine] – “Drama number one,/ The image of all that was going to come after:/the death of the white kitten – /wrapping it carefully in something soft -/laying it gently in a wooden saltbox -/ fastening the lid down” – (And you notice, that when he’s writing, he uses dashes (because it’s one thought after another thought after another thought, he hadn’t anticipated a long sentence, he’s just.. he could have used a comma, he could have used (a) semi-colon, but like a painter, making his sketch, just a thought – dash – a thought- dash) – “fastening the lid down / burying it deep in a hollow with tears,/and my sister Lillie May joining in the rites./ There were toboggans in winter, made of end to end/joined barrel staves, seat in middle, gliding/dangerously into the Asiatic valleys below” – (And that’s pure Kerouac style, that is to say, the exaggeration, and the “Asiatic” mysteries of his mother-in-law’s closet, or something, when he was seven years old)- “Scene-shifting a little later, the pasture a/deep religious memory;/ the Androscoggin/forever flowing solemnly through my brain,/coursing in and out of my flesh and bone/as it still does, sacredly./ There was Dr. Alonzo Garcelon, always known to us/ as “Dr.Gasselon”, flying through Haymarket Square/behind his racing steed, spitting tobacco juice/as he went, and the amazing vision of his beautiful/daughter Edith, at church of a Sunday morning/Mamie Straw and Lizzy Janes, sharp images of a day/so somehow past -/Miss Janes at the organ, pumped by a boy at the/back, out of sight – with the Ascension of Christ/over us all in not too good stained glass, as we/sang magnificats and epiphanies – and/ “Lead kindly light amid…””Lord lettest thy/servant depart in peace, according o thy word”. Skinny Jinny…” – (See, this is totally American, finally. You couldn’t anywhere get this off as a study of English poetics, or Surrealism even. You’d have to maybe know some blues (you could get it out of the blues) – “Skinny Jinny” – but you’d just really have to be a kid in America to write that – so it’s actually the first accomplished  Americanesque diction) – “Skinny Jinny was a tall, dark-clothed woman with/her thin arms akimbo under her black shawl,/wan-white, frightened of the solitudes that/enveloped her being, we children running madly for/home when we saw her – because “she has a butcher’s knife/under her shawl” – as if she hated little children and/maybe she did – so many do.” – (And that’s the kind of personal side-remark you get in (William Carlos) Williams too) –

So Williams and he were close friends. They liked each other. Williams loved his paintings, and he (Hartley) loved his poetry, at, at the time that this book came out, and later 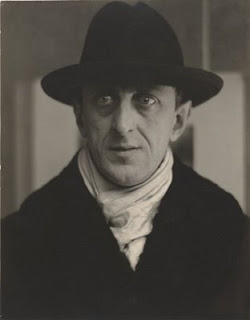 Student (CC): About what time is that?

AG: Well the book came out in 1945, and god knows when these… maybe he did.. so many were written.. I don’t have any… There’s so.. little information about Hartley. He was gay and he was a huge gawking fellow, and ungainly, and had a tough time finding lovers, and was friends with Hart Crane also, and had sort of (a) private life so that the literary intelligensia and the artistic intelligensia didn’t know him except as this big huge guy, who was very very sensitive, very tender, and would weep all the time, and painted like a storm, and was friends with the old guy, Alfred Pinkham Ryder

Ryder had a studio on Fourteenth Street (around between Seventh and Eighth Avenue on Fourteenth Street, on the south side of the street, in New York). And, of course, that’s where all the Bohemians were hanging out in those days, too, so he would have made special visits to Ryder. Ryder lived like the Collyer Brothers – he had this loft which (was) crowded with old fading paintings, that were already cracking because he didn’t mix his paints right, according to the museums, and they have now to be preserved, and they’re darkening a great deal.  And Hartley was a kind of private person like Ryder.

AG: I don’t know when these poems were written.

Student:  (You can really get) Williams out of it

AG: You can hear Williams.

Student (CC): About what time did they know each other? 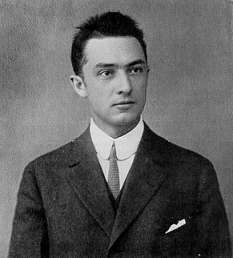 AG: Well, they would have known each other back in nineteen fifteen-sixteen-seventeen – –  nineteen oh-four or oh-five, I think – University of Pennsylvania. So they (knew) each other – (William Carlos) Williams and (Ezra) Pound) went to school with Marianne Moore and  HD  (Hilda Doolittle), and so they were a gang together in school. And Pound was taking out Hilda Doolittle, and Williams was in love with Hilda Doolittle also.
Then Williams would have gone to.. I think he went to Germany to study a little medicine, and then he came back, and then he was living in Rutherford, New Jersey, and going across on the Hudson Ferry ((or) the Hoboken Ferry, or the Fort Lee Ferry) to New York to go to Greenwich Village, and to go to art galleries, and to visit Alfred Stieglitz and his friends there, and his girlfriends, and go to art shows and painting shows like a young kid writing poetry  but still in touch with, apparently, a great gang of people at that time (and it turned American poetry upside-down, just like, fifty years later, that whole collaborative gang that included the San Francisc0 poets and Gary Snyder and (Robert) Duncan and (Robert) Creeley and (Charles) Olson, turned America over once again, in terms of modernizing it, updating it, updating the syntax, the diction, the relativistic measure, the dissociative aspect, putting that in to equal the dissociation of the mind) 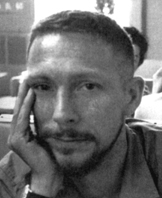 This was maybe a more powerful gang than the later ‘Fifties gang, because they had to start with the heaviness of (Walt) Whitman, and the heaviness of Edward Arlington Robinson, and a lot of poets who wrote in strict English verse-forms, and they had to update the diction, and hear a new rhythm for the first time – as new. Williams’ work (of) hearing new rhythm was as great a breakthrough (certainly, if not more, but certainly) as great a breakthrough as Kerouac’s hearing a new rhythm, and that’s a major cultural-historical alteration in consciousness, considering the great sentence in Plato – “When the mode of the music changes, the walls of the city shake” – when people’s perceptions change, their perception of government changes, their perception of the State changes. When people’s perception of music and diction and rhythm and language changes, perception of the State changes (which is what happened in the ‘Sixties again).

You get all this in these early evidences, (crude though they might seem to an academic teacher).