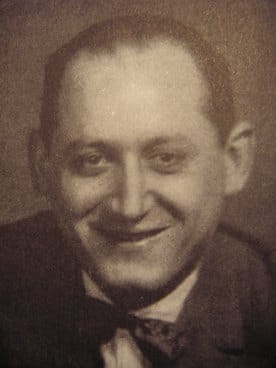 Benjamin Peret, next – 1899-1959 – also a member of the original Surrealist group. There was a grand reunion of all the old Surrealists and their friends in Paris in 1960 when Gregory (Corso) and I and (William) Burroughs were there together. We got invited, so Marcel DuChamp and Benjamin Peret, I guess they were the stars of the evening. (Tristan) Tzara was around in those days in Paris, too

Hymn of the Patriotic Old Soldier

I am an old soldier
see how pretty I am

A very cute poem. And anybody can write like that. Just do it, you know. Take off and go zig-zag, let your mind go zig-zag. You create beauty and that beauty actually has an effect on people because it breaks up the horrific rationalistic obsessive claustrophobia of the Cold War. It’s like telling a joke in the middle of an over-serious heavy hate-rant. It “lightens the heart” (as the Dalai Lama said the other night). A good belly laugh is, actually, physiologically good for the functioning of the heart – it has an affect on the heart chakra. A good belly-laugh reinvigorates the corpse. So if there is a psychological mental claustrophobia, this kind of poetry, which liberates the imagination and gets it out of its fixed groove (like a broken record, which most people’s minds are – in fact, mine is all the time), this kind of poem has a liberating effect and has a tremendous social importance. It’s like “God works in wondrous ways, his miracles to perform” [“God moves in a mysterious way/His wonders to perform”] . You take the most irresponsible poem (and) it has the greatest social effect, in certain respects. That which liberates the imagination (as a Surrealist said) is the only answer to the State, which is like a solidification of imagination and a close-down into claustrophobic prison.