A previously-unpublished Allen Ginsberg poem? -No, not really, as it turns out, but even so…

Marc Olmsted in his freshly-published scrapbook/memoir, Don’t Hesitate – Knowing Allen Ginsberg notes “To my amazement, in editing this book, I realized this particular poem (“Thoughts In Fort Lee”)  had, to my knowledge, never been published, not even in Allen’s posthumous revised Collected Poems”.

There are, of course, a number of such uncollected texts – “The Collected Poems”, one must always remember, is not the same thing as “The Complete Poems” – Some of these fugitive writings will be gathered in the months ahead, and put together for a proposed collection. [Editorial note – 2017 – see notice on that collection – here]. In the meantime, this typically Ginsbergian bio-metaphysical late rumination. Thanks, Marc

Diana went to jail for back taxes and cheating at cards
Lost control of her castle, lawyers ate her Empire.
She got sick and spend years maintaining her body
skin growth, liver failure, kidney disturbances, upset stom-
ach

But the castle of flesh ceased to function
She was left inside with her soul
What is that? Where will it go? Who am I?
asked Napoleon in bed, eyes closing for the last time on
Elba 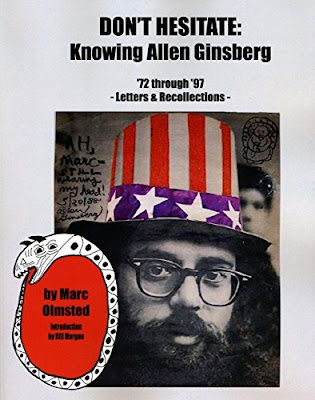 oops! August 2 up-date! – a couple of eager readers have alerted us to the fact that this poem has been published before!  (as “News Stays News” in Cosmopolitan Greetings – page 103) – Red-faced, but we still feel ok about drawing your attention to it – (and also to Marc’s highly personal and entertaining memoir).