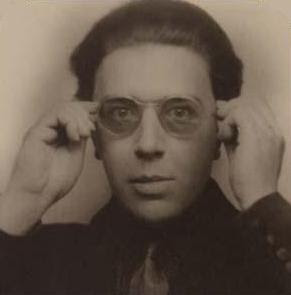 AG: ..Those of you who have the anthologies, please turn to Andre Breton French (born) 1896, we’ll cover French. We’ll finish up with the French twentieth-century today (August 13th) and move on to the English for our final (August 18th and 29th classes)..

Student: Are you giving a lecture at the (Boulder Public) library tomorrow?
AG: Yeah, tomorrow afternoon, three o’clock. I’ll try and cover what we don’t cover here, and some overlapping on the French writers, on the Portuguese, Greek, Spanish, smatterings of things that we didn’t get into here.
Student: When?
AG: Tomorrow at three o’clock at the library. Part of that series I’ve been doing all week – [to Student (CC)] – And do you want to pass those out?
Student (CC); Yes, this is also the heart poem (Calligramme) by Apollinaire. Those people who have anthologies, just take this and slip it into your anthology.
AG: I don’t think there’s that many around. How many people have anthologies here?
Student: Not on me.
AG: Oh, good, how come you don’t bring them in? It’s easier? big heavy weight?
Student (CC): Everyone might as well take one, I guess, I don’t know…

AG: Just a free poem that’s related to what we were talking about (the picture-poems) last time 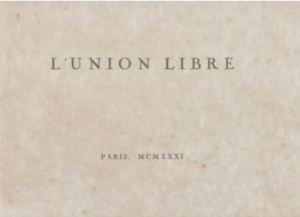 Now the poem by Andre Breton that I want to take up is sort of the climax of this aspect of the twentieth-century stuff – “Free Union”  (“L’Union Libre“) by Andre Breton (born 1896…he comes after Tristan Tzara in the French section) – and those of you who don’t have anthologies, you don’t need them..
..So..we had.. when you get settled I’ll start…. 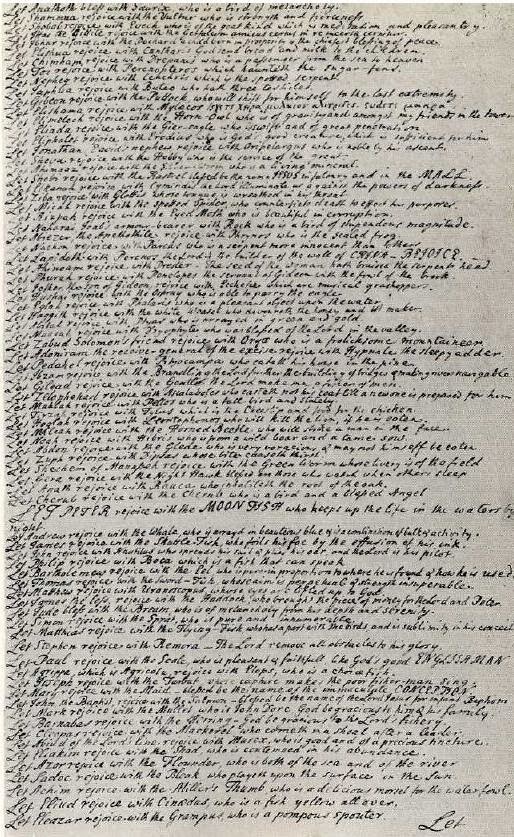 So, what we were working (on) all this time in terms of expansive (poetry) was extravagant imagination, and pumps to prime the imagination for improvisation. And the great example that we started with last term was Christopher Smart’s poem “Jubilate Agno” (“Rejoice in the Lamb”)  (which is, actually, the first poem in the whole anthology, which is a ”list poem” in the “Heroic Precursors” section). For those of you who weren’t around….the eighteenth-century;  Christopher Smart,““Rejoice in the Lamb”, which is, actually, the first thing in the anthology. I’ll read you a few lines of it so you can see the antiquity of the method, which comes from the Bible to begin with – [Allen begins reading from Christopher Smart] – “Let Amos rejoice with the Coote – prepare to meet thy God, O Israel, Let Ephah rejoice with Buprestis, the Lord endue us with temperance and humanity, till every cow have her mate!/Let Sarah rejoice with the Redwing, whose harvest is in the frost and snow.”…. Ehud rejoice with Onocrotalus, whose braying is for the glory of God, because he makes the best musick in his power”..For I bless God that I am of the same seed as Ehud, Mutius Scaevol and Colonel Draper – And so forth. This (is a) long rant which is antiphonal, a list poem, like a litany, where you begin with a single phrase, and repeat the phrase over and over again, adding new variations, like taking riffs, like riffing on a chorus.

Twentieth-century poetry, which got more and more dissociated, in terms of jumps between the gaps of the mind to include all different possible thoughts that were going through the mind (more or less as William Burroughs. was talking about), the disparate elements of the mind, disjunctions and juxtapositions, (poets) found in the twentieth-century that was one of the easiest and best modes to write in, and it was also one of the most surprising and anti-rational

The great classic of that, we’d touched on before, the Dadaist Manifestos of Tristan Tzara. And,(in the anthology), on the page facing Andre Breton’s, you’ll see that list<>- “DADA is a virgin microbe/DADA is against the high cost of living/DADA/corporation for the exploitation of ideas/DADA has 391 different hues and poses according to the sex of the chairman /It is transformed – affirmed – states the contrary at the same time – unimportant – shouts – gone fishing/Dada is the chameleon of rapid and self-interested change./Dada is against the future. Dada is dead. Dada is absurd./ Long live Dada./ Dada is not a literary school. howl”