Student: Did (Vladimir) Mayakovsky and his group.. were they familiar with “Zone”?

AG: Well, now I think not. Maybe not. (They) might have. Some would have. There was a French influence on Osip Brik, Mayakovsky’s friend, and on (Nikolay) Gumilev and the Acmeists, but I don’t know. I know the Futurists got together. There was an exchange between the Italian Futurists of 1905-6-7 [Editorial note – Italian Futurism was founded by F.T.Marinetti in Milan in 1909] – Allen is a little confused with the dates here, but I don’t know if “Zone” (did).. (but it) must have, because they were all reading French. The Petersburg intellectuals were reading French and admiring European culture. But “Zone” probably came out in some local.. well, I don’t know where it came out. I’ve forgotten what magazine it came out in, but if it was some larger magazine, a few copies might have gotten to Petersburg and circulated, certainly among Osip Brik and (Nikolay) Gumilev, and (Anna) Akhmatova, maybe.  Yeah?

Vladimir Mayakovsky of the streets of New York, 1925

Student (CC); This self-mythologizing (that you spoke of earlier)..
AG: Um-hmm
Student: (CC) …in terms of (Jack) Kerouac..
AG: Um-hmm
Student (CC):..Is this what Alan Watts means by Kerouac, that (you know), the verb from caricature – that he caricaturizes, caricaturizes
AG: Yeah, in a sense that there’s a certain caricature, too, when he (Guillaume Appollinaire) says (in “Poem Read At The Marriage of Andre Salmon“) – “We met in some miserable cellar/During the years of our youth/Both of us smoking and awaiting the dawn in ragged clothes” – There was probably a good deal more life and dignity than this little thin portrait, which is slightly caricature. But Kerouac did. That sounds like a Kerouac line –  “We met in some miserable cellar..smoking”.
Was Watts talking (specifically) about Kerouac?
Student (CC): Yes
AG: I think he was saying (that) Kerouac was more of a caricature than a serious…
Student (CC): Yes
AG: .. he meant. Yeah.. Well, reading Kerouac’s long prose, it (sometimes) seems… I don’t know..  did (Gregory) Corso cover (any of) that today?
Student: Yes he did 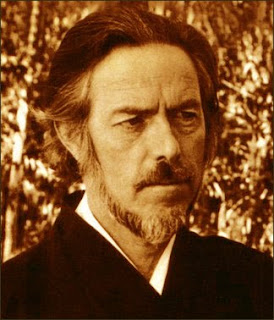 Gregory Corso in Amsterdam circa 1980 – photo by Eddie Woods

Student: He read about the descriptions of  (William) Burroughs and New Orleans…and, uh, then he went to Big Sur and described what a masterpiece it was, and then he took lines out  of Kerouac’s poems and talked about..
AG: He did
Student ..the sparrow and the leaf
AG: Uh-huh. Which was that? I didn’t know that..
Student: ..the sparrow and.
AG:  From Mexico City Blues?
Student: A big leaf falls on the back of.(a little sparrow)  I don’t know where he got that.
Student (CC): I think it’s one of the haiku at the end of Scattered Poems
AG: Um-hm. He cut the haiku down even further
Student: It’s in (the interview in)  Paris Review.
AG: Ah, yeah 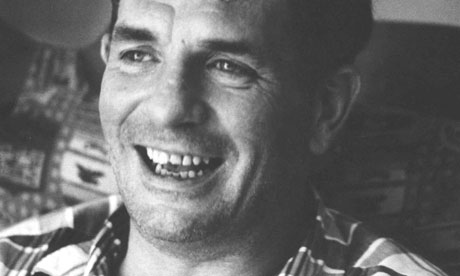 Student (CC): Watts goes on to say that the..  (the) one clique was going to northern California and there was another clique in southern California…and that the hipsters were, more or less, in northern California, whereas, I guess, the religious seekers were in…southern California.
AG: Ah, well, I don’t know. Actually, out of that group. a stronger religious Buddhist center rose in San Francisco than out of the writing group in L.A. who (most of them) turned out to be radicals or lushes, from Venice, California
Student: Radicals or what?
Student (CC): Lushes
Student: Alcoholic(s)
AG: The Venice group, a lot more of them died of lush.
Student: “The Holy Barbarians”
AG: Yeah, Lawrence Lipton‘s group

Student: Who is in that category?
Student (CC): A lot of jazz musicians
AG: Stuart (Z) Perkoff .. well, not a lush, but some drugs, I think – Stuart Perkoff 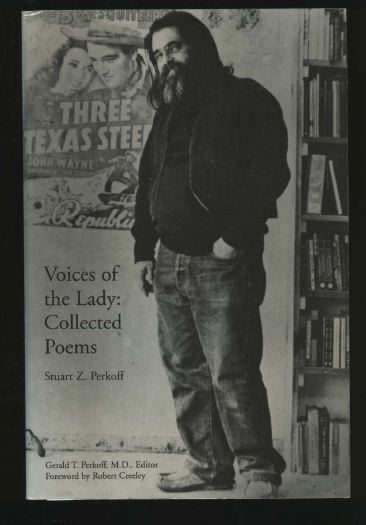 Student (CC): Charles Foster – that poet that I was interested in
AG: Radicals would be… what’s his name… McGrath, Tom McGrath – and (Lawrence) Lipton (himself). And almost all the poetry that goes on from that has that same insouciance and fast movement of mind, jumping from one frankness to another..

(Any more questions?) – Then, well, let’s quit for the moment. It’s a quarter-of. Anybody got any other questions?. I think the Dalai Lama is speaking
Student (CC): Tonight at Karma Dzong, I believe
AG: No
Student (CC): No, I think it’s over at the school.
AG: Do you know where?
Student: No
AG: It’s out..
Student: ..in Denver, isn’t it?
Student (CC): No
AG: No, tonight, here (at Naropa), and tomorrow
Student: Oh
Student (CC): Tonight, here
AG: As part of that on-going Christian-Buddhist Meditation Conference
Student (CC): Right
AG: There is a public speech by the Dalai Lama which anybody can go to. I don’t know the price.
Student (CC): Where is it?
Student:  I think it’s at the Chemistry Building…up at the University (University of Colorado, Boulder)
AG: Right…Yeah
Student (CC): Chem 140, or something. I think that’s it.
AG: Then there’s a poetry reading…on Thursday. (William) Burroughs class will come back two to four on Thursday..
Student: I thought it was..
AG: Oh, (that’s right) three to five, three to five, just before this one. So we have an ordeal, because Thursday there’s going to be this solid phalanx of courses – from Gregory (Corso)’s course, eleven to twelve-thirty, Peter (Orlovsky)’s, what?, one to two-fifty…(William) Burroughs, three to five, and me, five to seven. So fare-thee-well..

[Audio for the above may be heard here, beginning at seventy-two-and-three-quarter minutes in, through to approximately seventy-seven-and-a-half minutes in, plus from approximately eighty-one minutes in to the conclusion of the tape]