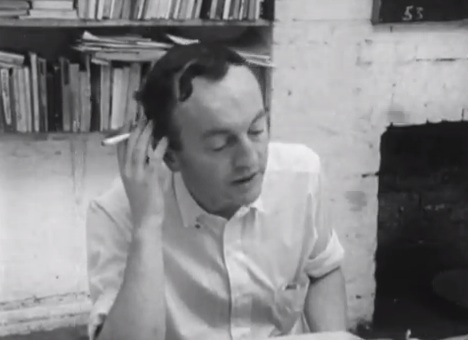 AG: So the last thing we had in the anthology was a poem read (by Guillaume Apollinaire) at the marriage of Andre Salmon, and the reason I put that in is that, in addition to inaugerating double-sight Cubism juxtaposition modernity (of psychological modernity, as well as bellowing buses and tramcars and electric wires), he also inaugerated that “Personism“that Frank O’Hara writes of (as) his basic theory of poetry, which is that because the poet is the maker of the word, anything that happens to the consciousness of (the) poet is history, and so anything he thinks of, (or) anything that occurs to him (particularly anything poignant that occurs to him in his lifetime, for his lifetime) is just as important as Caesar’s victories over Gaul, or dropping the bomb on Hiroshima, because those occasions of the poet – his marriages, his bar mitzvahs, his fist getting laid, his discovering his own toenails – are universal discoveries that everybody makes, that only the poet reveals out loud like a newspaper headline, or, like Ezra Pound said, “Poetry is news that stays news”, and the kind of news that stays news is also personal happenings.

So this is “Poem Read at the Marriage of Andre Salmon (Poème Lu au Mariage d’André Salmon) which is like a prophecy of the poem that Frank O’Hara will write to Mike Goldberg, or to his friends. July 13 1909, so this is all pre-1910, I’d say, then. [Allen begins to read Apollinaire’s poem] – “Seeing the flags this morning..” –  (Oh yeah, the other good thing about it, if you check it out against Anne Waldman‘s poetry, my poetry,  that poetry called “List Poetry“, or poetry that has that anaphoric return always back to (where) you say something and then you add on to it – like “the blackboard which is filled with the green sunyata, the blackboard which is full of white dots, the blackboard which is scratched by Buddhist fingernails, the blackboard which is composed of late substance made out of the oils of Arabia. So, the “list poem”) – [Allen then reads Apollinaire’s “Poem Read at the Marriage of Andre Salmon”, in its entirety – (“Seeing the flags this morning I didn’t say to myself/Those are the rich garments of the poor/Nor does democratic modesty wish to veil from me its grief…” (“En voyant des drapeaux ce matin je ne me suis pas dit/Voilà les riches vêtements des pauvres/ Ni la pudeur démocratique veut me voiler sa douleur….) … “Nor because rooted in poetry we have rights over the/words which make and unmake the world/ Nor because we can cry without ridicule and because we /know how to laugh/ Nor because we smoke and drink as in the old days/ Let us rejoice because the director of fire and of/poets/ Love which like light fills/ All solid space between the stars and the planets/ Love desires that my friend Andre Salmon should get/married today” (“Ni parce que fondés en poésie nous avons des droits sur les paroles qui forment et défont l’Univers/ Ni parce que nous pouvons pleurer sans ridicule et que nous savons rire/Ni parce que nous fumons et buvons comme autrefois/Réjouissons-nous parce que directeur du feu et des poètes/L’amour qui emplit ainsi que la lumière/Tout le solide espace entre les étoiles et les planètes/L’amour veut qu’aujourd’hui mon ami André Salmon se marie”) – So it’s this great vigorous affirmation that, actually, comes out of Walt Whitman and all the breakthroughs of the nineteenth-century and out of all the psychological modernities to lead to some kind of self-acceptation and realization that every moment of this life is eternity, that the ordinary mind is eternal, that the poem can be composed of an eternal understanding of ordinary mind – marriage, such as this 1909 marriage between poet-critic Andre Salmon and a lady

So this poem leads to all the exhibitionistic poetry of the New York School, actually. All the poems that say, “Well, I went downtown today and I bought a tootsie roll, and then I put a nickel in the 1902 subway, and then I went upstairs to see my mother and her in-law and we discussed the price of eggs on the market. Then I went downstairs to the Museum of Modern Art to see the Picasso show [Editorial note – in 1980, the previous year, MOMA had hosted its comprehensive Picasso retrospective] and then I walked down 57th Street admiring my new shoes and then I discovered that there were all these funguses growing on the subway platform which looked like mushrooms, and then I went out, walked to the end of the block and looked at the towers of Hoboken which reminded me of bulbous church towers of Russia”. In other words, the ordinariness of these is simultaneous, of these images. Making high poetry out of the ordinary events of your life, which is (if you ever read an essay by Frank O’Hara called… “Personism”. That was his theory of poetry (which he set up as  against the “Beat”, “Beatnik-ism”, or “Surrealism”, or “Existentialism“, or “Communism”, or “Anarchism”, or “Capitalism”, or “Futurism“, or “Acmeism“, or “Dadaism“, or..”Macho-ism”, or “Feminism”, or “Homosexual-ism” – “Personism”. Whatever happens to him is eternal, because he’s only here once, and that’s eternal. And so, every detail is of utmost magical significance and importance (which is a lesson that everybody could learn, because there’s lots of people who think that every detail that happens to them is totally unimportant, and in fact, the most execrable excrement of the universe, instead of being the only universe they’ve got). Since it’s Frank O’Hara’s only universe, or Andre Salmon and Apollinaire’s only universe , therefore that’s the mythic universe to celebrate..

..which fits in with one of  (Chogyam) Trungpa (Rinpoche)’s slogans – “Things are symbols of themselves” – i.e. the one and only marriage that you’re going to have is obviously your one and only marriage in this universe, so therefore it’s the one cosmic marriage you’re going to experience. So if it isn’t taken as sacramental and cosmic and poetic, then it’ll be taken as something else, it’s strictly up to you in your own perception.