A couple of weekends ago, we featured Allen’s 1995 rendition of “Howl” (recorded at the Knitting Factory in New York) as part of an intensive week of performance (it was Allen’s intention to read comprehensively through his entire corpus). Today, we feature another reading from that engagement – a reading of his other (“Contest of Bards”, notwithstanding) major epic poem – Kaddish.

Once again we are indebted to the extraordinary Ubuweb

Allen’s introduction to Kaddish on that occasion is here

So this is an extensive poem. I’m not sure about the time, probably about half an hour – and written and begun in Paris, 1957 and (195)8  a few sections, the litanies and lyric sections at the end, and the narrative, New York City, Lower East Side, 1959, (19)60. So the full title is “Kaddish – Poem, Narrative, Hymn, Lament, Litany, Fugue”, and the word “Kaddish” is from the Hebrew word for any number of a variety of prayers, this particular prayer for the dead, and the rhythm of the poem is based on the rhythm of the Kaddish, governing.. actually, it’s probably dactylic cadence, and you’ll.. in the midst of the poem there is a sample of the Hebrew (so you’ll get the basic rhythmic thrust. So it begins with a Proem  summarizing the images and the subject-matter, then, in the writing, I realized that I hadn’t particularized, so the second part is a long narrative, the actual story, and then the third part is a.. the beginning of a lyric section, the fourth part, sort of an extenuated, or graduated, litany, that gets longer and longer before it diminishes, and then the fourth part, a kind of fugue, two seperate themes merging at the end. The poem was written for my mother Naomi Ginsberg (1894-1956), who died in Pilgrim State Hospital in Long Island that year.”

By way of contrast, here’s an earlier (1959) recitation of the poem, (the opening section of the poem) given at the San Francisco State University Poetry Center – here 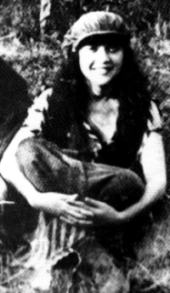