AG: We had an enormous mental bath and blood bath with (all that) Russian poetry, and we had some comparisons with other countries, but we didn’t pick up what was going on in France at that time [early twentieth-century], the only thing we got onto earlier was a little (Arthur) Rimbaud.

What (William S.) Burroughs was talking about before in his discourse about cut-ups and mental probe and making maps is reflected somewhat in the work of the French Dadaists and Surrealists and modernists. So, let’s go (now) to Guillaume Apollinaire in the French section – “Zone” (it’s the second thing in the French section (of our anthology)
Has anybody read this poem?  How many here? You have never.. nobody has read “Zone” before, aside from three or four people? – Ivana (sic) and Nina (sic) are from Yugoslavia? You had read that in Yugoslavia or here?

AG: Yeah. And you read it here. Well, did the other people here have this anthology? How many of you don’t have the anthology? – Yeah, well, I think I had assigned this some time back, to start reading through the French work. But, just as well if you haven’t, we can start it all over again. We have three different translations of it.

Does anybody know who Apollinaire was at all? Has anybody got some idea? He was a friend of (Pablo) Picasso, friend of the painter (Henri) (Douanier) Rousseau, the primitive painter. He wrote a book on Cubist painters. He operated in Paris as a great impresario, and editor, and writer of pornographic anonymous novels to make a living. He visited Le Bateau Lavoir, which is the place in Montmartre where Picasso lived with (George) Braque and where there was painting experiments with Cubism – a totally modern means of visual representation. The thing that they found was that there were a lot of different angles that you could look at something at (from which you could look at something). You could look at it at ten of two, and you could look at it at two o’clock, and ten after two. And you could look at it from here, and you could look at it from here, and you could look at it from there, from above and from the middle and from below, and the right and the left. So therefore, why not try and make a composite of all the views and break the object up into all sorts of angles, from above and from below, and get a collage of all the different perspectives you might have on a still life and try and paint that. This was part of Futurism. In Italy and in Russia, (particularly in Italy, if any of you have seen paintings by (Umberto) Boccioni or (Giacomo) Balla they do that). There’s a very famous painting in the Museum of Modern Art (in New York) called “The City Rises” (I think, (from) 1907, or so), which actually would show one arm in many different positions going all the way down, so it’s like a blur, almost, but in bright red Expressionist colors

The Cubists, following (Paul) Cezanne, did something very similar (and similar to (William) Burroughs’ cut-up(s), actually). What they did was try to take three or four different angles of a table, with a guitar and a piece of fruit and a bowl on it, and, looking at it from three or four different angles, paint it simultaneously, all at once.So there were a lot of  different art movements. One was Creationism, which the poet Vincente Huidobro had something to do with (Huidobro, having been a friend of (F.T.) Marinetti and of Apollinaire – Marinetti, an Italian Futurist, Huidobro from Chile.
And there was Simultaneism, (in) which you tried to expand your consciousness by seeing things simultaneously from many different directions. The experiments with cut-ups with Dada-ism came on around that time, also. And some of the first Futurist experiments with interrupting thought-forms in order to juxtapose thought-forms, or newspaper-headlines, or texts, or pictures, so that you saw everything simultaneously. In other words, what would now have evolved, culturally, through acid [LSD], into mixed-media or multi-media – that is, a series of different stimuli coming from different directions all at once – began out of that seed of the Cubist(s) breaking-up an object into different views, different times, and then trying to paint it all at once.
So you’ve all seen Cubist paintings, right?  Yes? No?  Is there anybody that never saw a Cubist painting and doesn’t know what the fuck it is and doesn’t know what I’m talking about?  Okay. Everybody has seen a Cubist painting? Because, if you haven’t, we’ve got some here, probably. Just look around you. So, the painters actually initiated that simultaneously – simultaneous vision (which Burroughs was talking about before in the class that he just held).

The poet who introduced it most obviously in English was T.S.Eliot How many here have read “The Waste Land” by T.S.Eliot? Yes. Is there anybody who’s not ever seen that text? Is there anybody who’s not seen “The Waste Land”? It’s alright if you raise your hand. Yeah
So Eliot’s “Waste Land” comes out of Apollinaire’s “Zone”. That’s what Eliot and (Ezra) Pound say. So if you want to understand T.S.Eliot’s “Waste Land” (which is, actually, a cultural monument in (the) English language), then you have to go back to Apollinaire’s poem.”Zone”. To understand “Zone”, all you have to do is look at some of the Cubists to realize that he was trying to put things together simultaneously that would not yet usually be put in that sequential order.
His method  was similar to stream-of-consciousness, or similar to Burroughs’ cut-up, in some ways – similar to what we know of in Eliot – juxtaposition or collage. The method is basically collage. I’m saying “similar to Burroughs’ cut-up” because Burroughs’ cut-up comes from collage, paste-up, juxtaposing and pasting separate views, separate places, separate times, one on top of another (a little bit like Cubism theoretically, because it’s different perspectives put together in one spot), kind of an extension, or expansion, of human consciousness, or an expansion of optical consciousness, so that you see things in three different ways all at once.   Yeah?

Student: Would you then set aside the “Calligrammes” (of Apollinaire) as being, sort of, outside of the major body that Apollinaire accomplished, as being very representational?

AG: No. That’s part of the body of work he accomplished.. I’m just saying “Zone”, particularly, is based on the idea of some kind of cut-up or simultaneity or juxtaposition or collage, and it’s the first great example in European regular poetry of that collage method (or, it’s considered to be the seed-work, from which all the other great, twentieth-century, international, collage-type, stream-of-consciousness, jump-from-one-thing-to-another, ideogrammatic, method (for example, Pound’s Cantos comes). It’s the seed-work that they all come from, including the work which we know best in English as the biggest poem of the century, which is “The Waste Land”. And it also affects “Howl” and a lot of my poetry. Apollinaire’s “Zone” also has an influence on that too.

The “Calligrammes” that he was talking about just now are like that also. It’s also some sort of collage. Same thing. ..Poems written in the forms of pyramids, or rain. I think we have one in the form of rain in our book, that one that’s on Apollinaire’s grave. This affected (Lawrence) Ferlinghetti’s little book that (was) written out in rough…

AG:  Yeah, Backroads to Far Places. And also, what’s the book I loaned you, the…?

AG:  Wilfred Funk, yes. His hidden masterpiece, Wilfred Funk, is written out like that. There’s also little stars, drawings. I guess Apollinaire was not the first, but one of the first (with Francis Picabia and (Tristan) Tzara and the others, the Dada-ists) to experiment with visual poetry. There’s more. We have one little sample of “Rain” (Il Pleut) (in the anthology). We’ll get more later on, I guess, if we ever xerox up some more

Student: He (Apollinaire) did many Calligrammes

AG: Yeah, there’s one like a necktie. What’s on his gravestone is “Calligramme.. . Here’s one [Allen points to Apollinaire calligramme in the book] that’s supposed to be like a chicken or a duck or a bird with a tail. Those are called “calligrammes”. I’ve done a couple, but a modern poet who put out a recent book specializing in that was John Hollander who wrote a series of poems in the shape of the subject-matter 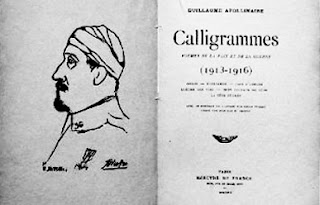 [Audio for the above can be heard here, starting at the beginning of the tape and continuing to approximately eleven-and-three-quarter minutes]