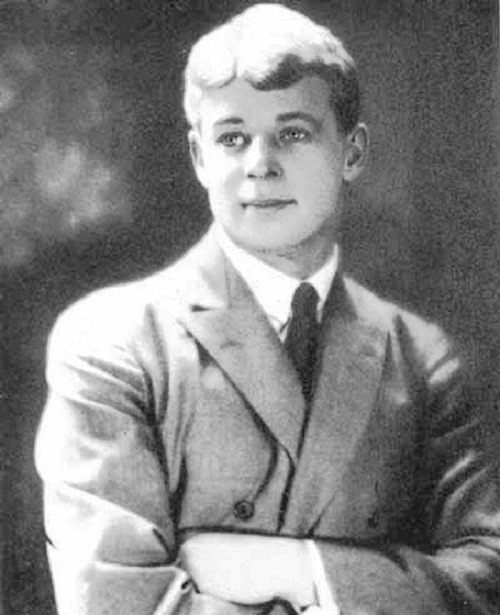 .. So, Esenin broke loose from (Nikolay) Klyuev, who was very demanding (sexually, I imagine, as well as morally). He didn’t want Esenin to be running around Russia as a big intelligent poet, handsome, on his own, making out with everybody else. So there is another poetic cafe that’s described in (Gordon) McVay’s biography of Esenin – (an interesting book – Esenin – A Life by Gordon McVay, also Ardis, Ann Arbor).

Student: Let me see the photographs. Can I see?

AG: Well, there’s lots of photographs of Esenin. I think you’ve seen some but I’ll get a big one if I can. He was the greatest looking poet after Rimbaud, probably. So  Klyuev had himself a good thing going. Well, there’s a picture of Klyuev and Esenin, in the lower-right, over there. I don’t know if you can see very much of it. Well, Klyuev is the older guy

(and then) Esenin himself, a little bit later – really a movie-actor! –  totally the best! – the best piece of poetic meat in Russia in 1910! – Powdered his hair, occasionally. He had a fantastic career.

Here, with Isadora Duncan, whom he married.. He married Isadora Duncan (there’s a movie about it, even) – [Editorial note – more than one] . They were stars in their own day. They had a stormy career. I can read you something about that..

AG: Yeah, when we get to that. First of all, what I wanted to get to was – we had the Stray Dog Cafe, now – the Pegasus Stall, in Moscow, 1919 (this is after the Revolution)  – “The chief Imaginist..” (there was a group called the Imaginists, which was Esenin and his friends, (Anatoly Mariengof…) – “The chief Imaginist cafe-tavern” [writes Gordon McVay] “was..virtually their own  property – the Pegasus Stall (“Stoilo Pegasa”). This home ground of the Bohemian Imaginists inspired many (a) virulent attack, and seems, by some accounts, to have been a den of vice. An “Old Writer” in the Herald of Literature cast a jaundiced eye on “the new poetic stall” in 1919 – “And now there is a new cafe, the Pegasus Stall. It is led by two recent pillars of the Poets Cafe and Russian Imaginism – Sergei Esenin and (Anatoly) Mariengof. In the new cafe, everything is, as in the previous cafes – bad coffee, dinners at high prices, a stage, mediocre verse, maxims on the walls and beneath the glass on the tables, pearls of wisdom and inspiration of the poets in charge. And yet are there (perhaps) too many poetic stalls in Russia?”. A couple of years later, in (19)21, Dmitry Furmanov went there to hear Mariengof recite and was not favorably impressed – “The Pegasus Stall is, in essence, nothing more than a stall of bourgeois spoiled children. Here people congregate who play absolutely no part in the movement of society – painted, shrill, and stupid young ladies, whose tiny hands are kissed in the old-style by their poet admirers. Here people throw away tens of thousands of rubles for a light breakfast, as if it were a mere kopek. That is, the public is no stranger to speculation. Here you will see polished bourgeois kiddies, excellently dressed, smoothly shaved, sleek, fashionable, foppish. In short, all the same riffraff who formerly reveled in obscene salon anecdotes and ditties, and, for that matter, still do. Mariengof himself is a typical glossy dandy. He creates the most repulsive impression, that is, by his openly bourgeois essence”.

The Pegasus Stall (the former Cafe Bim-Bom), situated on the corner of Maly Gnezdnikovsky Pereulok and Tverskaya Street, present-day Gorky Street, and here, while the customers ate and drank, a kind of orchestra played, and the Imaginists recited – O(saf) Litovsky (journalist and theatre critic) recalls Esenin acting as a waiter in the cafe, dressed in a dinner jacket, with a napkin under his arm. It remained open from 1919 until late 1924, and, unlike the other cafes, only Imaginist poetry was recited there. A number of women came visiting (including Isadora Duncan). The Stall (Pegasus’s Stall) became Esenin’s residence. He, literally, lived there. “At first, (Nikolai Poletaev notes) I think, Esenin drank little, (and I never saw his friends drink at all). Esenin’s temperament was such that if he drank but a small amount he’d begin to shout and act rowdily. The poet’s fame grew and grew. People knew and loved him. Young people were crazy about his verse. And it must be said that for Esenin fame was everything. Obscurity and insignificance were synonymous in his vocabulary.” It stayed open until two a.m. and it seems that the poets began to recite around eleven-thirty p.m. Until the period of the New Economic Policy, introduced by Lenin, it was, in the words of one Ivan Startsev, “the only place in Moscow where there were gatherings of Bohemians and the unbridled cafe public until two or three in the morning”. Even Mariengiof, who read there and revelled in the trappings of Bohemianism, had to describe the milieu there as one of  “shrill foxtrots, an empty-hearted, red-lipped crowd, reeking of wine, powder, and cheap little passions from  Tverskoy Boulevard” – (which is where the whores lived, mostly)

There’s a meeting between (Velimir) Khlebnikov and Esenin and his group. There’s a food shortage in Moscow and Esenin knew somebody who was in charge of relief shipments on the railroads, and so he wrangled a private railroad car to go around Russia reciting poetry and buying up black market goods to bring back to Moscow to sell. So they decide to give a poetry reading in Kharkov before a large audience.

“One aspect of that much-described eveninghas appeared to many as a particularly shameful blot on the Imaginist record. (Aleksey) Chapygin recalls, “Mariengof pushed out onto the stage the emaciated Velimir Khlebnikov. But the latter, resisting and cowering, had no wish to come out. When he was pushed out, he came but he declaimed in such a way that nobody could hear him. Khlebnikov, Futurist poet of fantastic neologisms and quasi-scientific calculations, was noted for his impracticability and otherworldliness.Mariengof describes the incident without any compunction, beginning by establishing Khlebnikov’s strangeness. He shook hands holding a shoe he was repairing. He had eyes like a saint’s on an icon and he had spent the previous night writing illegibly in the dark, according to Mariengof…” – (These are the guys who had to stand up against (Joseph) Stalin and (Leon) Trotsky and all of the theologians and Communist theoreticians).

AG: Yeah.. He starved to death within a few years.

Peter Orlovsky: He was fixing his own shoes and he was.. no light in the room..

AG: According to Marion Goff, Esenin had suggested that they should crown Khlebnikov as “President of the Terrestrial Globe” -(if you remember those texts we went over earlier) -“President of the Terrestrial Globe in the City Theatre, and Khlebnikov had gratefully agreed. A week later, before a packed auditorium, Khlebnikov stoof bare-footed in a cloth surplice as Esenin amd Mariengof proclaimed him President. After every quatrain of mock praise, Khlebnikov quietly answered, “I believe”. And finally, as the symbol of the Terrestrial Globe, a borrowed ring was placed on his finger. When the owner wanted the ring back after the ceremony, Khlebnikov grew afraid and hid his hand behind his back, saying, “It’s…it’s…it’s the globe, the symbol of the terrestrial globe, and I.. you see.. Esenin and Mariengof made me President.” Esenin roared with laughter. The owner pulled the ring from Khlebnikov’s finger, and Khlebnikov “wept bright tears as large as those of a horse”.  The Futurist poet, N(ikolai) Aseev, upon hearing of the episode, felt indignant, especially as “Khlebnikov had only just then recovered from typhus.” Travelling then, just after the Revolution, there’s the peasant poet, Esenin, beginning to have his doubts about the Revolution, but still wants to be a good Communist. But, on the other hand, although he’s broken with Klyuev, he still has (a) romantic notion about back-to-the-land and about pre-Industrial Revolutionary sincerity. So, from a letter by Esenin to a girlfriend, to give an example, to illustrate his sorrow for the departed, beloved, familiar, animal quality (which he contrasts with the immovable power of what is dead and mechanical)

“We were travelling from Tikhoretskaya to Pyatigorsk, when suddenly we hear shouts., look out the window and what do we see? We see a small foal galloping with all its might after the railway engine. It was galloping in such a way that we realized at once that for some reason it decided to outstrip the train. It ran for a very long time but in the end it began to tire, and at one station it was captured. The episode may strike others as insignificant, but for me it tells a very great deal…”[tape ends here but then resumes on the next side]

” …The steel horse has conquered the living horse..” – (It’s the old John Henry story, actually) – “And this small foal was for me a graphic, dear, dying image of the face of (Nestor) Makhno The village and (Nestor) Makhno in our revolution are terribly like this foal in the competition of a living force with one of iron. I am very sad at present that history is living through a very painful epic of killing off the living personality, for you know that the Socialism that is developing is not at all what I expected but a deliberate, definite, kind, like a sort of island of St.Helena without glory and without dreams. In this Socialism, there is little room for living, for a person building a bridge into the invisible world, as these bridges are hacked down and blown up beneath the feet of future generations”.

“By 1920, therefore, Esenin sympathized more with the anarchic revolt of the anti-Bolshevik leader Makhno than with the disciplined iron will of (the) Bolsheviks. The incident of the horse, mainly pursuing a train, acquired a symbolic importance (and Mariengof described it at some length also). It became the central episode of Esenin’s famous poem, “Sorokous (Сорокоус,) which was written in the train on the way to Baku The contest between the living and the steel horse must have appealed especially to the Imaginists.

So most of his poetry then is a mixture of nostalgia for his youth, beauty, past, villages, his peasant civilization in connection with the land and some kind of living romance, or living romantic animal quality. And the slow alcoholism that overtook him, or that he took on. And the slow grind with the Communist Party – and  (now) with a new cult, another school, (which was a proletarian cult), which said that everything should be political, radical, revolutionary, pro-Communist, pro-government, decided by the workers, and (that) there should be workers’ poetry, and (that) poetry should be simplified, and (that) all these schools, of Symbolism, Futurism, Acmeism, Imaginism, were just a bunch of whores, running around, hanging around cafes and having a good time while the workers sweated and were suffering – (which was, in a sense, quite true,  because Esenin was a cut-up, totally, and getting drunker and drunker between 1919 and 1925, when he committed suicide, another example of the poète maudit or “ill-spoken”, or “cursed” variety (of poet) that we had with (Arthur) Rimbaud, (Paul) Verlaine,(Francois) Villon (and) which we narrowly escaped having with Gregory Corso someone who’s drinking was so terrific that it actually drove the world away, although everybody loved him and adored him and realized he was perhaps the greatest poet around, but he became intolerable to almost everybody. There are lots of stories about that, which we can get to.