AG: Then there’s a remarkable poem, written in 1950 by somebody who was there, Georgy Ivanov – “fought in the First World War and in the Red Army and in the civil war, born in 1896. His early poetry with its cult of heroism owed much to (Nikolay) Gumilev, the Acmeist. In the mid (19)20’s, he was influenced by (Velimir) Khlebnikov and (Boris) Pasternak. Later…    No, I’m sorry. Pardon me. I’m reading…  I’ve got the wrong guy here! [Allen resumes with the correct information] – “1894, Georgi Ivanov, at first a minor Acmeist poet, developed in an original manner after emigrating to Western Europe. In the last ten years of his life, living in France, he wrote witty and nihilistic poetry about the futility of life.”

So, this is a little footnote to (Osip) Mandelstam. He quotes “We shall meet again in Petersburg as though we had buried the sun there”. [“В Петербурге мы сойдемся снова,/Словно солнце мы похоронили в нем . . . “]

And now he begins his poem – “A quarter century has passed abroad/ And now it is ludicrous to hope./ The radiant sky above Nice/ Has forever become the sky of my home./ The stillness of the blissful south,/ the murmur of the waves, the golden wine./ But a Petersburg snowstorm is singing/ Through the snow-plastered window/ That a dead friend’s prophecy/ Will surely come true.”

So he’s still hoping..1950..”A quarter century has passed.. /And now it’s ludicrous to hope.” But the primary prophecy “will surely come true”. So it’s a funny prophecy.. a young poet in Russia has that as some sort of slogan – “We shall gather again in Petersburg (for a time of, say, liberation of the imagination)

Student: Is that poetry available to the poets in Russia now (1981)?

AG: No, not necessarily, I don’t know. Actually, a lot of it is..  what I’m getting it from is from a refugee Russian group called Ardis printing house in Ann Arbor, Michigan, which has put out this really great volume of Khlebnikov (for four bucks, incidentally. If you want your own Khlebnikov, which is like a rare toy, it’s only four dollars [1981 prices!] and it’s published only recently. It’s (published) (19)76. I just ordered it through the Brillig Works (bookstore). It’ll take three weeks or so). And this book on Russian Futurism is also Ardis House. [Editor’s note – since 200, a number of these (Ardis House) books have been reprinted by the Overlook Press]  A lot of this is not available in Russia presently, stuff in here from the Russian Literature Triquarterly, by Joseph Brodsky and others, is not. And the complete text of (Anna) Akhmatova‘s recollective poem-collage “Poem Without A Hero” is not yet [1981] published complete in Russia. So..Yeah?

Student: What was the name of  the Mandelstam poem about St.Petersburg?

AG: “We Shall Gather Again in Petersburg”

AG: Yeah? And the fellow who wrote about it, or the fellow who recollected it was Georgi Ivanov. And his was 1950 (which is around your birth-time! – at least for some)
Ivanov has a couple of interesting other little short poems in this Penguin Book of Russian Verse, so while we’re on him, I’ll just read those because they’re kind of sharp… Yeah? 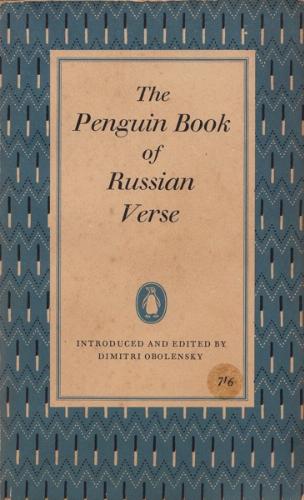 Student: Do you also hear bitterness in the Mandelstam poem?

Student: But when you speak of the nostalgia, but.. I don’t know.. you know.. I just.. with the constant refrain of the “blissfulness” and the “meaninglessness”..

So Ivanov says – “What argument can there be with inhuman fate, what battle?/ All this is a delusion. But this pale blue evening is still my domain,/And the sky, red between the branches, pearl-colored at the edges,/ the nightingales singing in the lilac bush, an ant is crawling on the grass. This is of use to someone”  – (His perception, his direct perception, his grounded-ness, his actual realism (because it, again, is an Acmeist poem)) – “Perhaps even there is some use…”-) (All this use is because, after all, remember, (Vladimir) Mayakovsky‘s poems, he wanted to make useful, like on a production line – he wanted a production line of poetry, of poetry useful to the Soviet citizens.) – “Perhaps even there is some use that I breathe in the air,/ And that my old overcoat is bathed in the sunset/ on its left side and, on its right, sinks into the stars” – (That’s a funny line. It’s a little piece of poetry, like (Gregory) Corso, sort of). Then, a more direct comment on the social, cultural situation) – “How fastidious you once were, my friends./ You didn’t drink vodka, you didn’t like it, you preferred burgundy./Cyanide or potassium has become our bread, mercuric chloride, our water./Well, we’ve grown accustomed and innured./We haven’t gone off our heads./On the contrary, in a senseless and evil world, we are resisting evil./Tenderly we circle in a dead man’s waltz at an emigre ball.” -(in Paris – writing.  So he ended his life in Paris, writing witty, nihilistic poems – Georgi Ivanov, a minor Acmeist poet).