AG: So this [Editorial note – Allen is referring here to the Marinetti-Schwitters impromptu readings – see here] – is (19)32, and it’s already a highly-developed art form – the sound poem.  (Kurt) Schwitters, I would say, is the very best, and actually, there are recordings of Schwitters and his son reading his great poem, the Ursonata – Ur-language, primeval language, ultimate language, earliest language – “Ursonata” – which is a long piece – a good hour, hour-and-a-half – and it’s a huge verbal musical construction, maybe one of the grandest pieces of either music or poetry (take your choice) of the twentieth-century, considered a seminal work, and considered by musicians (say John Cage or Yoko Ono), or by poets (like Philip Lamantia, or any of the poets who are familiar with this construction) to be one of the great works of the century. But it has to be heard to be appreciated, so I think maybe during this term I’ll bring in a tape. In 1965, Peter (Orlovsky) and I drove through here (Colorado) and stopped over to visit Stan Brakhage and he had a tape of the Ursonata, which we copied, way back when. So I’ll try and bring it and put it in the library.

It’s a highly-developed form by now, by the time (that) there’s a direct confrontation between the leader of the Futurists in Italy (Marinetti) and the leader of the “Merz” (that was Kurt Schwitters own form of Dada, or whatever you want to define it) – “Merz”. Merz art, which was a compilation, composition, collage art, rising out of the Dadaist manifesto that I read from Tzara the other day, where you cut up a newspaper and put it in a hat. In (t)his case, he also made paintings of (from) garbage that he found wandering around in his home town, and he built a giant Merz house in Europe [Editorial note – Actually, he built three of them. The first he abandoned, the second was destroyed in an Allied bombing. The first remained unfinished at his death in England] – which was to say, the construction of the (various) rooms, which would have maybe a hundred garbage-cans on the ceiling or hanging from the ceiling, with their garbage-can- tops nailed to the side like shields. Then the walls would be a collage of bus-tickets from the local townships and burlap bags and can-tops and can-labels. And samples of his work are in the Museum of Modern Art, and, of all the collage artists of the twentieth-century, his are the most brilliant and vivid and bright –  red, green, and jumping-up-to-the-eyeball – and amusing and the best constructed (they’re actually beautifully constructed – he was a great painter. He simply made assemblage work. He was the founder of the conception of assemblage, which is three-dimensional collage, not just two-dimensional, that is, objects that stick out of the canvas). That leads into work by (Marcel) Duchamp and leads into work by Jasper Johns and (Robert) Rauschenberg (particularly, the early assemblage work of Rauschenberg , including (“Monogram”) the large goat on a platform with a rubber truck-tire around it and a Coca-Cola or some other sign, an early mid-(19)50’s work by Rauschenberg. All of that comes out of Schwitters.

And of sound poetry, he’s considered the champ. And the present [1981] sound poet of  Middle Europe is Ernst Jandl, whom Peter (Orlovsky) and I visited this last November, living in Vienna, a Viennese poet, who took part in the 1965 Albert Hall London Poetry Incarnation (which was a big international poetry-reading, and Jandl, with five other poets helping him – including Michael Horowitz, and, I guess Tom Pickard maybe, even – no, not Pickard, Horowitz and the local poets that were around (George Macbeth, etc)  – performed a new sound poem by Jandl, [Editorial note – actually, it’s a poem by Schwitters] which has, as it’s main sound, sneezes – but rhythmical sneezes – each one sneezing in turn, with a series of words in between the sneezes. So that actually, he would say something like “priimiitittii priimititti, primiittiti” and then from five poets in a row, “achew achew achew, achew , and then a cough. But it’s really like a symphony of sneezes, (which nobody (had) ever thought of), totally humorous, actually. Jandl had a number of books (both of regular, and of sound, poetry) and I think he’s probably one of the best of the German poets (right) now.. Yeah? 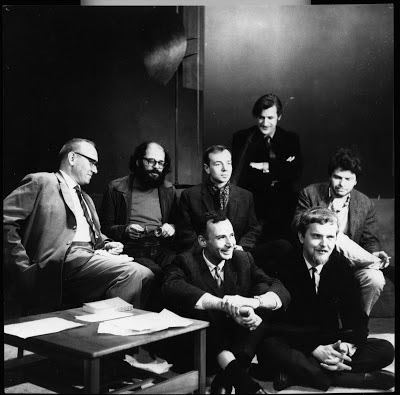 Student: …I have a friend who’s a composer who composed something that’s the sound of animals walking into, like, electronic fences, and stuff like that..

Student: …and getting zapped , and the sound of mosquitos getting – phizz – you know..

AG: Well, Jandl and Schwitters were having fun

Student (CC): That’s so one-step beyond this. There’s a book about that.