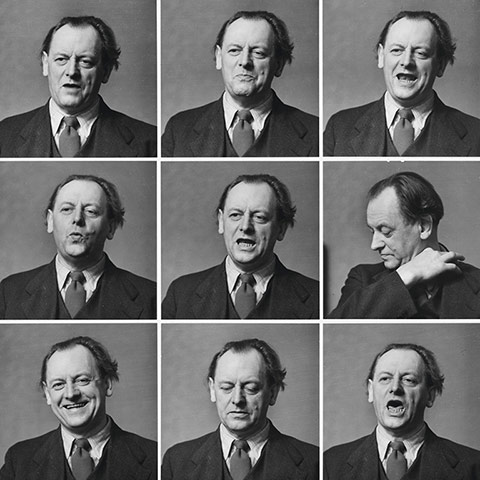 AG: (Kurt) Schwitters also, listed under the Russian section [sic – of the classroom anthology), an inheritor of Dada and the version of Futurism, (the) breakthrough into modernity that took place in Central Europe. Schwitters – 1887-1948, for those of you who have the anthology. He has a poem called “Priimiitittiii“. I’ll do it once, and then maybe those who have the text can do it with me. Anybody find it? Schwitters? – it’s in the French section.

Student (CC): French, oh you said Russian.
AG: French section.
Student (CC): French.
AG: French section – 1887.
Student (CC): I don’t even know this poet.
AG: And I hope you go on and read the rest of the page, once you get it. Schwitters is..
Student (CC): It should be right here.
AG: ..1887 – Eighteen eighty-seven. If you go..
Student (CC):  I…
AG: See, they’re all arranged chronologically.
Student (CC): Um..hmm.
AG: I’m sorry. I’m sorry. Excuse me, German! , German.
Student (CC): German.
AG: German, German, third in the German (section) – 1887 – third in the German. I got him associated with the French because he was part of the Surrealist movement [editorial note – not so – Schwitters was never a part of the Surrrealist movement, the Dadaists even kicked him out for being too bourgeois (probably because his income came from his typography work and some real-estate holdings). He went on to create his own art movement which he dubbed “Merz”, a movement with a membership of one!) – Expressionist, as well.  The German section (The German section is right before the Russian, immediately before the Russian. Before the Russian is the German section, at least in my book. Have you found it?
Student (CC) : I(‘m) (looking at various) poems,  just go ahead with it. I think I..
AG: Let’s see, you got through Spanish, Portuguese, Greek, German and then Russian. Is anybody else having trouble finding it? You keep going (from the) Spanish..
Student (CC): Mine goes from Spanish to Russian
AG: “Heroic Precursors” – Portuguese, Greek, German
Student (CC): Before the Spanish?.. See, it’s before the Spanish in this book.
AG: Oh, I’m sorry. Okay, I see. Okay, you’re right. Right, okay..

You want to try that?

This particular poem, if you notice, if you can see it or hear it, it has somewhat of a pyramidal form, like a litany,

and, actually, this was the model I used for the third part of “Howl” (“Carl Solomon! I’m with you in Rockland!/where you’re madder than I am..”) – this particular little fragment of a poem, the sound construction of this poem..if you gentlemen would listen a second.. the sound construction of the poem (is) (also) the paradigm I used for the second part of “Howl” (“Moloch..”) (and also the litany section in “Kaddish”) – that is, the presentation of a phrase, and then a response, with a graduated response, where your response gets longer and longer and so it builds a pyramid with a pyramidal base beginning with a point at the top – “priimiitittiii        tesch”
Also, what he did was abstract the common litany form that Andre Breton practiced (which you’ll find in the French section) of just setting forth a phrase and then adding on a weird idea to go along with it. So it’s the litany form, or the list poem form, but used  also as a sound poem. So you have a list poem and a sound poem together. In other words, you try and make a sound structure out of the form of litany or list poem

AG: Pardon me?.. Yes, we’ve got the tush in there, but you’re not supposed to be interpreting.

AG: Okay -“Priimiitittiii”  – One, two, three..
[Allen leads the class in a group reading of Schwitters’ “Priimiitittiii  – they read through it  twice]  – Alright

Student: That sounds like something that they made you do in a mental institution.

AG: In the middle of what?

Student: In a mental institution.

AG: Yes, exactly. That’s what it’s about! – Actually, if you read on in this page, there’s a discussion of a meeting with (Filippo) Marinetti , (Lazlo) Moholy-Nagy, Kurt Schwitters, at a banquet with the high members of the Nazi party, (Joseph) Goebbels, (Hermann) Göring, and the President of the University of Berlin, Gerhart Hauptmann, and Rudolf Hess and Ernst Röhm . This is in the early (19)30’s, and there’s a description of the Nazi culture people, (who) wanted to include Kurt Schwitters and a few of the other Futurists and Expressionists in their scene, and so they invited them to a banquet..

Peter Orlovsky (sitting in on the class): Yes