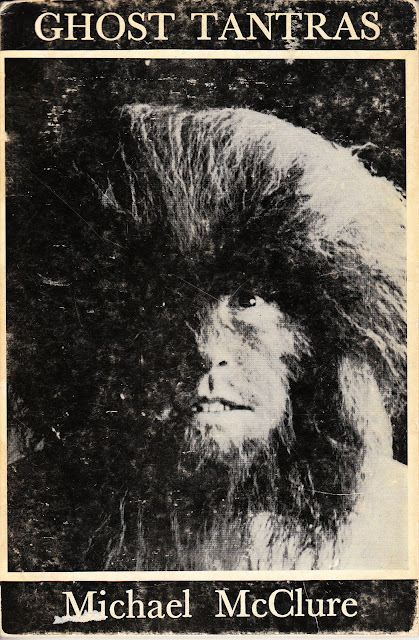 Student: I want to mention that Michael McClure has created something called  a Grahh language

AG: Ninety-nine poems, or so (ninety-nine). He was inspired by listening to the lions in the San Francisco Zoo, and listening to whale sounds and coyote sounds and wolf records. And so he (wrote) poems in what I think he called “Beast Language”, and the book is Ghost Tantras, and we probably do have it in the library. And he pronounces them really interestingly. And what they are (are)..little fragments.. you’ve heard them?

AG: Some of them?

Student: On and off

AG: Yeah. He read them here at Naropa, some. Little fragments of his favorite associated words, like “air”,”tip”, “wing”, “gold”, “velvet” “delicate”, and then, mixed up with “graar, graour, greyour, graar, greeear, grouer”– all different sounds. And then he read some of them..there’s a recording of him reading some of them in the lion house in San Francisco Zoo, beginning to read, and, after a while,rousing the lions so that the lions are roaring back at him and he’s roaring back at the lions. And it goes up like a great fugue, or builds up until the lions build up to a height and slowly descend and calm and he descends and calms also. So it ends in the quiet.

There are a lot of  poets that have done sound poetry and there’s a vast field which we’re hardly covering (except for a few poems by Kurt Schwitters, which are in our anthology here – particularly the poem “primititti”, which we actually might get to right now, just as a comparison to be continued…