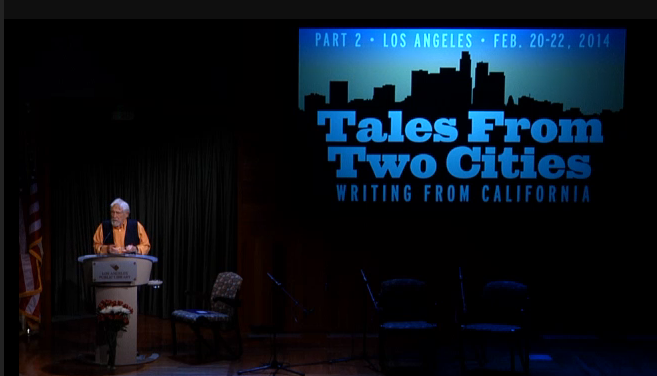 This past February, as part, (part two), of the Tales From Two Cities – Writing From California Conference, (held at the Los Angeles Public Library, under the auspices of the Huntington-USC Institute on California and the West), Gary Snyder (following an enthusiastic introduction by LA Times book critic, David Ulin, and with the assistance of, and with deep gratitude to, poet and environmentalist, Lewis MacAdams) spoke and read to a large and engaged predominantly local audience.

The full reading (including MacAdams (instigator of the exemplary (LA) River Project FoLAR (Friends of the Los Angeles River) concluding the reading, reading from his book-length poem, “The River”, “The Voice of The River”) is available here  [2018 update – sadly this video is no longer available]

and here’s Gary, from a few years back, remembering his old pal, Jack Kerouac.

“I only knew Jack (Kerouac) personally, in an intimate way, for those few months from the Fall of (19)55 to May of 1956 when I set sail for Japan. I never saw him again, and it was like a brief camp-out together when we shared that cabin in Marin County through the Spring of that year, practiced meditation together, talked Buddhists texts, wrote poetry and drank a lot of Tokaj – and then I left. At that time, all that Jack and I were doing together were practicing mountains, practicing wood-cutting, practicing flowers and birds and practicing Buddhist studies.

Interviewer: Does The Dharma Bums..Is that a really accurate story or is a lot of it made up?

GS: Some of it’s a novel, some of it reflects things things that happened, but even the reflection is novel too, like (William) Burroughs would say.

Interviewer: Did you know he was going to write a book about you?

Interviewer: Do you think he had a sense of himself as being a major novelist. I mean as like a..

Interviewer: In what sense..?

GS: The clear sense of his skill, his power, his vocation, and his energy, and that there was something that he was going to be saying.

Interviewer: In a way, there’s a funny kind of worship, you know, of what you represented.

GS: Well, he does that in the novel. He plays that in some of the other novels too, where he makes his first person singular into kind of a naive character that elicits information from people by pretending not to know (and he didn’t do that much with me in person, although, it’s true, he was real naive about some things.

Interviewer: What was.. what was..

GS: He didn’t really know what was involved in going back-packing and hiking and climbing. It was all new to him, but he was a quick learner. And he didn’t know much about nature, or that you could know about nature really, in its specific way. And so, spending some time on the Spring bird migrations and the many species that were coming through Marin County that year- five hundred a year come through Marin County on a Pacific fly-way – so we were checking off species as they came through that little shack and Jack really appreciated all that information.
..Like we were cutting some eucalyptus and splitting eucalyptus for fire-wood the stove and he was like a kid – learning how to start a chain-saw, how to handle a maul – same way as when we went back-packing. Oh, I was going to say, we did another trip too (besides to the High Sierra). We did a.. two-night maybe? camping trip, hiking right from Homestead Valley over Mount Tam. and camping out on the drainages on the north side of Mount Tamalpais..local places..and swinging around and coming back…

Interviewer: Was Kerouac really as frightened… there’s a thing where he..

Interviewer: Because he says “I was a coward” – He says “I was the Buddha known as the coward. At least I have joy”, or something like that [Editorial note – Kerouac’s actual line –“I realized I have no guts anyway, which I’ve long known. But I have joy.”]

GS: He likes to play with that. He’s an athlete.

Interviewer: Did you think of him as an intellectual?

GS: No. But well-read, to make the distinction. A very well-read person and a very sharp person with a critical acuity when he wished to employ it, but not like a practicing intellectual, which is a style, (that) is all it is…

GS: Suffering, Impermenance, the First Noble Truth – everything is impermenant and we must find our joy and our freedom in suffering – finally. He swung around through that, to the Buddhist understanding of that – and it’s all through his writing – and then settled back into, maybe, the more familiar comfort of Catholic metaphors…Now you asked me “Did he seem very American?” and I said “Yes”, and you said “Why?”, and I was ruminating on how to answer that. He was in his physical health and strength, in his unconscious grace, in his child-like-ness, (which was real a lot of the time), in his openness to experiencing new things and learning new things, his paradoxical joy in a kind of freshness in the world (paradoxical, because at the same time he was aware of suffering and impermenance), and maybe all of that is sort of American – And a total absence in Jack of anything elite, or yuppie, or academic, or intellectual, or any of that posturing at all that we associate with learned people, middle-class white people. He was more like your aunt, you know, sitting at a table in the kitchen, or your grandma, sitting at a table in the kitchen, speaking in common-sense truths about orderliness and kindness, basic instructions, and so, very much like my old aunt from Texas, and easy to be with.

Happy Birthday, Gary – and thanks