AG: Let’s see what else we’ve got. There was one [by Velimir Khlebnikov] that reminded me a lot of Gregory (Corso) (the reason I said some cross between Gregory Corso and (Peter) Orlovsky is the certain strange combination of phrasing that’s similar) called “The Lone Performer” (ОДИНОКИЙ ЛИЦЕДЕЙ). The first line mentions Tsarskoye Selo (Царским Селом) now Pushkin], which is a little town outside of Leningrad (St. Petersburg) where there was a private school (where (Anna) Akhmatova, his friend, grew up, actually, and went to school)..and which is always referred to.. it’s outside of Leningrad, and it’s a little.. it’s where the Tsar had, I think, a summer palace (I’m not sure, I think it’s the summer palace or some special garden or retreat (a summer retreat) outside of St Petersburg, now Leningrad [ Editorial note – now St Petersburg again – sic] – Tsarskoye Selo. And there are a lot of poems by Akhmatova relating or referring back to that early era. I think others, also, were familiar with that. Of course, (Alexander) Pushkin grew up there too. So it’s famous in Russian literature because Pushkin wrote some very famous poems about it. – [Allen begins reading Khlebnikov’s  “The Lone Performer”] –  “And while above Tsarskoye Selo/Akhmatova’s song and tears were pouring..” ( И пока над Царским Селом Лилось пенье и слезы…) “I understood that I was seen by none/That one must sow..” –  (S-O-W – like you sow seed) – “That one must sow the eyes/That the eye-sower must go!” – (“Я понял, что я никем не видим,/Что нужно сеять очи,/Что должен сеятель очей идти!”) (that phrase, “..one must sow the eyes/.. the eye-sower must go!”, reminded me of Gregory’s kind of combination of words – “the eye-sower”

Student: “Star-screwer” [Editorial note – the epitaph to Allen’s Kaddish is a quote from Corso – “Be a Star-screwer”]

AG: Yeah, well there’s that little phrase of Gregory’s – to be a “star-screwer”. But, “eye-sounds”. He has a phrase of describing his own poetry as “eye sounds”, his method.

So, you see, a funny genius, this guy (Khlebnikov). And his photograph is a turn-on, because once you see his photograph you suddenly recognize who he is – a big idiot with a  basket on his head!. You might pass that around [Allen passes around his book] – There are a couple of photographs of him in there with his girlfriend. He looks like the simpleton that you’d kn0w he’d be. 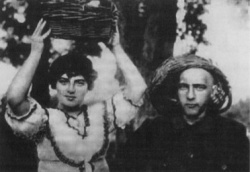 Vladimir Khlebnikov with a friend, “the daughter of a wine-merchant”, 1912

AG: “ум”  So this is taking that root and using conventional  and unconventional prefixes and suffixes (that is, little phrases, little syllables before and after”) – [Allen reads from the translator’s introdction to the poem] – ‘The translation below leaves the resulting neologisms in the original and converts the standard Russian words into English.”. then Khlebnikov gives a little dictionary of all these funny words. We’ll just read it straight.

Bang the glad tidings of the mind!
Here’s the bell and the rope.

Then he has little translations. But if you get the.. actually, you hyper-ventilate if you pronounce that properly. It gives a tingling in the spine.

What else have we got of his to amuse ourselves with?

Oh, I’m sorry, with that  “Goum’/Oum/Uum”, there was a prefatory five lines –

“Quiet! Quiet! He will speak/ Zangezi: Ring the glad tidings of the mind! /Sound the tocsin of reason, the big bell of the/mind: All the different shades of the brain will/ pass before you in a review of all kinds of/reason. Now! Everyone sing after me…
“I –  Goum/Oum/Uum..”  ( And so forth.. That was the prefatory note).